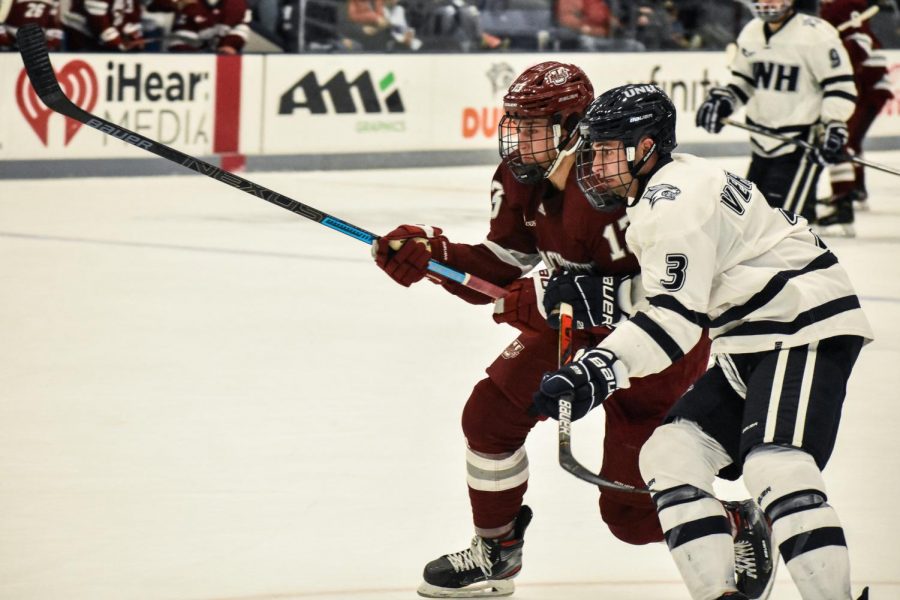 DURHAM, N.H. — Two New Hampshire goals in a 13-second stretch were too much for No. 2 Massachusetts as the Minutemen fell to the Wildcats 3-1.

UMass (6-2, 2-2 Hockey East) got on the board first, but surrendered the tying goal five minutes later with 11:44 left in the second period and never regained the lead. With the puck behind the net, UNH (5-2-1, 3-1 HEA) center Jackson Pierson passed out to an open Ryan Verrier at the point who let loose a wrist shot from above the right faceoff circle. Verrier’s shot was deflected out in front, popping the puck up and over the shoulder of Filip Lindberg to knot the score at 1-1.

“One’s a fluke goal,” Carvel said. “It hits our guy in the shoulder, flutters up in the air.”

On the ensuing faceoff, Pierson won the puck back to Max Gildon who ripped a wrister past Lindberg. In the span of just 13 short seconds, the Minutemen went from leading by a goal to trailing by a goal, 2-1.

“That’s the defensemen getting the puck to the net,” Carvel said, “and our defensemen needed to do a better job of getting pucks there at times but our defensemen had the puck on their stick a lot tonight in the offensive zone.”

UNH prevented UMass defensemen from getting pucks to the net often on Sunday. The Wildcats blocked 21 Minuteman shots with UMass only getting in the way of four shots.

UMass netted the first goal of the game early in the second period. On the power play, Zac Jones took a shot from the blue line and Mitchell Chaffee got a piece of the puck, redirecting the shot past UNH goalie Mike Robinson’s blocker.

The Minutemen put the pressure on the Wildcats in the third period, facing a one-goal deficit.

Much of the first four minutes of the third were played in UMass’ offensive zone, repeatedly testing Robinson who answered the challenge.

The Minutemen supplied some of their best chances of the game with under five minutes remaining in the contest. A UNH penalty for boarding put UMass on the man-advantage needing only a goal to tie it. The Wildcats came close to surrendering the lead multiple times but none closer than a Chaffee shot off the inside of the post that would’ve given his team the equalizer.

“We did a lot of good things in the third,” Carvel said. “But their goaltender played well, and we couldn’t find a way to score an ugly goal.

“We’re not a strong scoring team around the net. We want the goals to be a little too pretty. We had enough pucks around the goaltender, one of those—they’ll find the back of the net if that’s your mentality.”

While too little, too late, the Minutemen mounted significant offensive chances in the third period. After being outshot 26-15 through the first two periods of play, UMass sent a barrage of shots Robinson’s way, forcing the junior netminder to make 13 stops in the final frame.

“Their goaltender was outstanding late in the game,” Carvel said. “I thought, obviously, our third period was much better. We were in desperation mode and UNH is just trying to hold on to their lead.”

UNH, on the other hand, got just three shots on goal in the third period. After protecting their lead, they were able to secure an empty-net goal with 29 seconds left to ensure a Wildcat victory.

The win improves UNH to a perfect 3-0 on home ice while simultaneously putting an end to the Minutemen’s five-game winning streak.

UMass takes the ice against another Hockey East opponent next Friday at Boston University. Puck drop is set for 7:30 p.m.