Bortle: Quinnipiac won with the urgent play No. 10 UMass has been lacking

UMass moves to 3-3-1 in their last seven games 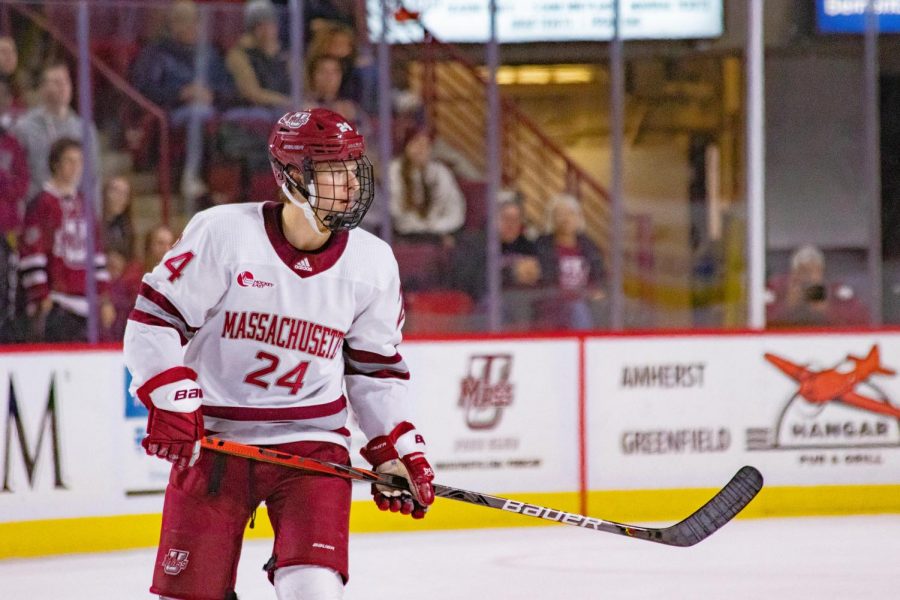 For a Massachusetts hockey that has been looking to play with more desperation, Saturday’s opponent showed them just what they’d been missing.

Early in the second period, Quinnipiac manufactured a shorthanded chance in a game with very few offensive chances, as Skyler Brind’Amour got in the way of a UMass pass and took it the length of the ice only to be denied by Minutemen goalie Filip Lindberg 1-on-1.

Although Lindberg’s save bailed UMass out at the time, it was an early indicator of what both teams were bringing in on Saturday night. The Bobcats went on to a 2-1 win, and the difference in the game was Quinnipiac’s willingness to make the gritty plays.

“That first period was very poor on our part,” UMass coach Greg Carvel said. “The lack of compete, the lack of desperation—we addressed it after the first period. I thought we were a little better in the second period. And then in the third, it was just too little too late.”

Lack of desperation has become a theme for Carvel and the Minutemen in recent weeks.

“It’s desperation,” Carvel said after a Nov. 10 loss to New Hampshire. “I just asked the guys; we need to battle harder. If you battle harder, good things will happen.”

The Minutemen responded to Carvel’s call with a 3-2-1 record in the following six games, culminating in Saturday night’s loss to Quinnipiac, the team’s first home loss since Jan. 4 a season ago.

The clearest stat to show the Bobcats’ desperation level was their 19 blocked shots. UMass shots from the point weren’t making their way to goaltender Keith Petruzzelli, as Quinnipiac put bodies in front of shots, time and time again stopping pucks or at least getting enough to send them wide of the goal. The Minutemen took 60 shots on the evening, but only 26 of those went on net.

The lack of shots from in front of the net has been a trend in the stretch since the New Hampshire game.

“We couldn’t find a way to score an ugly goal,” Carvel said after the loss to New Hampshire.

Quinnipiac, on the other hand, did just that. In a 0-0 game early in the second period, against a team that hadn’t lost at home in almost 11 months, the Bobcats forced a puck into the crease on a backhand shot before Nick Jermain jammed it home under Lindberg’s pads for a 1-0 lead.

“We feel fortunate to come to UMass and win one here,” Quinnipiac coach Rand Pecknold said. “I know they don’t lose a lot at home.

After a second Bobcat goal early in the third put the Minutemen in a 2-0 hole, UMass started to exhibit the desperation Carvel had been looking for. The Minutemen outshot Quinnipiac 11-4 in the third period and cut the lead to 2-1.

But as Carvel said, UMass’ efforts were too little, too late as they missed an opportunity for a weekend sweep.

“But [the urgency] wasn’t there,” Carvel said. “Quinnipiac was desperate—you could see by the amount of shots they blocked tonight. The energy you felt from their bench, it was that little thing, the extras. We didn’t have that juice tonight.”

As the Minutemen continue to slide in the rankings, with a draw to Merrimack and the loss to Quinnipiac looking like missed opportunities, they will turn their attention back to Hockey East play next weekend against Maine, where they will look to play with the urgency that’s been missing.

“We discussed as a team and tried to put a finger on it, what exactly the case is,” Carvel said, “…hopefully we’ll learn and move on.”