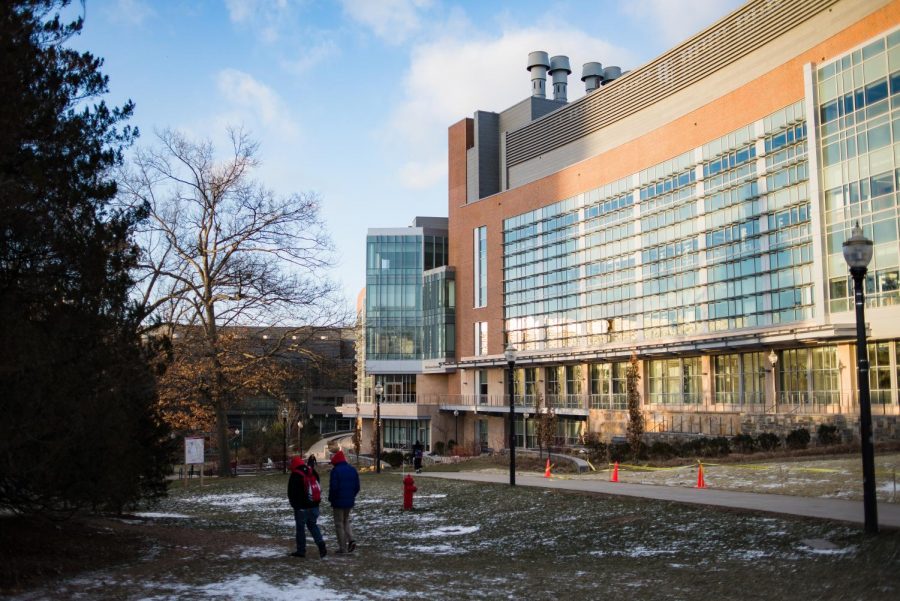 Eugene Declercq, a professor of Obstetrics and Gynecology at Boston University, detailed new findings in a talk as part of the Tay Gavin Erickson Lecture Series in the Life Sciences Laboratory at the University of Massachusetts on Thursday.

New and expecting American mothers are at the greatest risk of death in 2019 than at any time since the 1970s, and African-American women remain at substantially greater risk than their white counterparts, according to new data from the Boston University School of Public Health.

“This is bad. We should be worrying about this,” Declercq said. “You can’t turn around and say, ‘Well it was a measurement issue, we are really doing fine.’

The data indicates that the maternal mortality rate in the United States has more than doubled since 1987, increasing from a low of 7.2 deaths per 100,000 births to approximately 15 maternal deaths per 100,000 births in 2019. African-American women remain over three times as likely as their white counterparts to die during pregnancy or childbirth — a similar ratio to data from 1951, with 36 out of every 100,000 Black mothers dying across the country from complications related to pregnancy or childbirth.

Declercq’s work, published in 2015, began as an attempt to create a standard national measure of pregnancy-related deaths out of a patchwork of different state measures and then to compare this data with other large developed nations.

His team’s findings indicate an alarming trend of increasing maternal mortality across the country, with the U.S. lagging far behind other developed nations in ensuring the health and safety of women prior to, during and in the year after childbirth. The U.S. ranked 48 in the world for maternal mortality, and when compared to other developed nations with more than 300,000 births per year, the U.S. ranks last with a mortality rate more than seven times that of first-ranked Italy.

Declercq said,“We are still doing terribly in the United States and we have to address that.”

Persistent racial disparities in maternal mortality rates remain a significant problem in the U.S. African-American women are substantially more likely to die during the process of pregnancy and childbirth than their white and Hispanic counterparts. Even after being adjusted for income levels, these disparities remain, the professor said. Declercq pointed to a lack of adequate research into the specific risk factors affecting Black mothers and a need for more Black professionals in the field of obstetrics and gynecology, as well as midwifery.

“These disparities are profound. We have to understand that different people have different risks, and we have to adjust our systems accordingly,” he said.

While stressing the immense importance of racial disparities in understanding maternal mortality in the U.S., Declercq noted that even if African-American mothers are excluded from the calculation and the data were measured for non-Hispanic white mothers alone, the country would still rank far below peer countries.

“There are systems issues in the United States that go beyond race. We have deeper issues we have to address,” Declercq said.

Declercq said that contrary to the public opinion, this is not just an issue of deaths during childbirth. While a third of maternal deaths do occur during or within one week of giving birth, those alone do not represent the entirety of the picture. One third of maternal deaths occur during pregnancy, and another third occur between one week and one year after delivery.

“That redefines this as a clinical problem alone, to being part of a larger public health challenge. That’s very different,” he said. “If we are really going to have an impact, we have to focus on all of these things. The reality is that we’ve set up a system that protects babies, but not mothers.”

This is not solely an issue for new and expecting mothers, but for American women as a whole — the death rate for all women aged 15 to 44 increased significantly from 2010 to 2017. Deaths amongst women aged 25 to 34 have increased 26 percent overall during this period. For white women, this upturn has been even more pronounced, with a 35 percent increase in the overall mortality rate recorded in just seven years.

Declercq focused on deaths due to opioid overdose and deaths due to self-harm as the most important drivers of the increased rate of death among American women, stressing that a solution to the problem must include care for women at all stages of life — not just during pregnancy and childbirth.

“This whole focus on maternal mortality is a subset of the larger focus we should have,” he said. “This is the tip of the iceberg, the canary in the coal mine. It is a much bigger issue with women’s health.”

Despite the bleak picture painted by the data, Declercq was optimistic that these troubling trends can be addressed. He believes legislators are showing a real interest in creating change, noting that more than 20 bills related to maternal mortality have been introduced in Congress, and that he has had conversations with dozens of members of the House Democratic Caucus in past months pertaining to this issue.

He believes systemic changes are needed to address the frightening trends, including training more women of color as OBGYNs and midwives, creating a more effective system to address substance use disorder. The system would dedicate greater resources to women struggling with such problems long before they are pregnant and continue to provide them with support system after they have had the child, he added.

Tristian Mosley and Jeanne Grutchfield, both freshmen Social Thought and Political Economy majors, said they walked away with a new understanding of maternal mortality in the U.S.

“It was very informative, and really sad,” Mosley said. “I had heard a lot about the disparities for women of color, but I did not realize quite how deep the problem really went.”