Coming off a sweep, UMass hockey gears up to play Brown 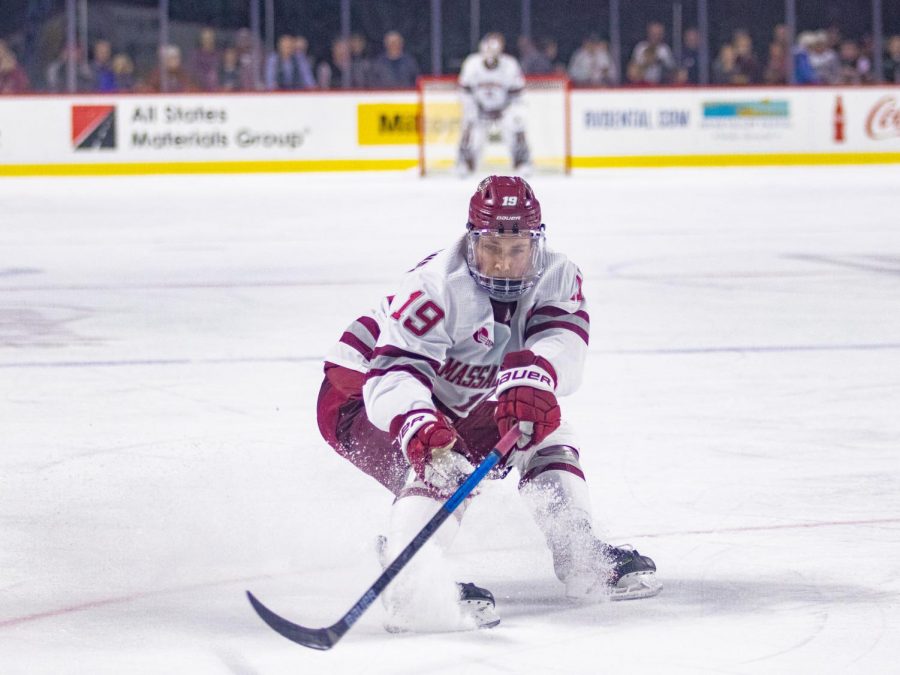 The Massachusetts hockey team has an odd six weeks coming up.

On the surface, it’s a pretty easy game to overlook – Brown has struggled to start this season, and Tuesday’s game is the last thing standing between the Minutemen and their longest break of the 2019-20 campaign.

“A lot of teams aren’t going to play for a month,” UMass coach Greg Carvel said. “We wanted to try to limit this stretch. The longer you go without playing, the further you’re going to fall off  your level of play. So, I’m excited that we get to keep playing here and excited we get to play on the 29th too.”

The Minutemen have had some hiccups this season against iffy opponents. There was the 3-1 loss at UNH on Nov. 10 and then the 3-2 loss — on 52 shots — to BU the next game. Two games later, UMass tied Merrimack at the Mullins Center. Remember the next home game? The Minutemen lost 2-1 to Quinnipiac.

Brown is statistically the worst opponent the Minutemen have faced. Through 12 games, it has averaged 1.75 goals per game and Justin Jallen, the leading scorer, only has nine points.

This doesn’t mean Brown is all bad. The upside for the Bears has been their power play – ranked 16th in the nation, scoring 21.9 percent of the time – and Gavin Nieto’s solid stats in between the pipes. In nine total appearances, the senior has a goals-against average of 2.51 and a save percentage of .917.

Still, making sure this isn’t a trap game is a priority for UMass.

“I think we’re just hyper-focused on our team,” Carvel said. “What we do and how we do it and standard of play. I thought our standard of play took a step forward. Again, I as a coach, I’m not looking at this as anything other than another hockey game that teams expected to play to our standard.”

Despite a bumpy November, UMass got back on track with two wins this past weekend against Maine, outscoring the Black Bears 9-2. The weekend was defined by two three-goal periods – the first 20 minutes on Friday and the middle 20 on Saturday – that put the Minutemen far ahead.

Carvel would like nothing more than to leave Meehan Auditorium on Tuesday night with that momentum intact.

“I’m glad we have a game on Tuesday,” Carvel said. “I’m excited for it just because I thought the team, with the health, took a big step this weekend. We haven’t had a lot of luck against Maine. The last two years, I think we were 2-4 in the six games against them, so to take care of business was a good sign of where the team is.

“I want a better sign on Tuesday against Brown.”

One of the primary things the Minutemen had going for them against Maine was the benefits of a complete lineup. The weekend saw Jake Gaudet, Marc Del Gaizo and Niko Hildenbrand all return to action. Del Gaizo added a goal and two assists on the weekend, and Gaudet and Hildenbrand added an assist and a goal, respectively, over the course of the two games, which the Minutemen are happy to have heading into the break.

“As a coach, it’s exciting to get Del Gaizo and Gaudet and Niko back in the lineup,” Carvel said. “Those are veteran players and I think they made us a much more complete team, and I’m excited we get to play again. That’s the attitude we’re going into this game with.”

Another development that’s helped the Minutemen of late is the play of Matt Murray in net. In his last four games, the junior is 4-0-0 with a 0.50 GAA and .974 save percentage. His overall GAA of 1.39 ranks third in the nation.

UMass has the advantage of a two-goalie tandem, and Carvel has said he wants to stick with the hot hand and alternate between Murray and Filip Lindberg. As much as Murray’s stretch is separating him from his Finnish counterpart, Carvel won’t budge on naming a starter.

“He’s been great, he’s been outstanding,” Carvel said of Murray. “It’s very similar to last year: I got two goaltenders that both want to play and they’re pushing each other and whichever one Jared [DeMichiel] comes to me and says, ‘Hey, let’s go with this guy’, I’m completely comfortable, because there’s two awesome kids who just show up, play hard, they’re good teammates, get better and are just huge assets to our hockey team and our university.”

The Minutemen will face Brown on Tuesday night. Puck drop is slated for 7 p.m. from Providence, Rhode Island.