10 blocks is a new program record 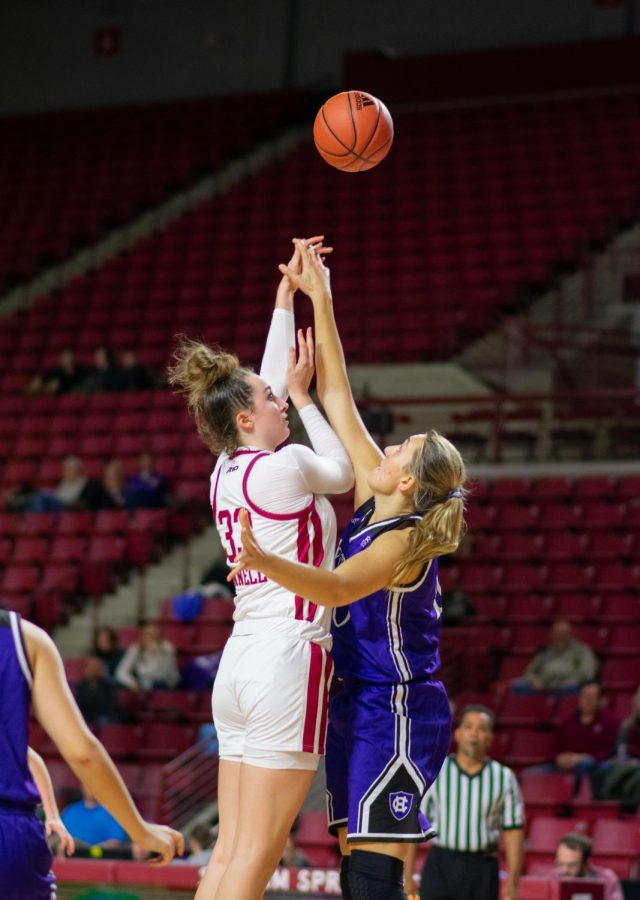 After an early deficit, it was the inside game that propelled the Massachusetts women’s basketball team as it came back from an 11-point deficit for a 75-72 win.

Freshman center Maeve Donnelly led the charge, shutting down Holy Cross (4-3) inside in the final three quarters and rendering the Crusaders’ offense one-dimensional. Donnelly finished with a double-double, recording 12 rebounds and a program-record 10 blocks.

“I’m assuming that she put a lot of insecurity in their players’ minds as far as coming over,” coach Tory Verdi said. “We were getting beat off the dribble, she would come over and alter shots, block shots. She just anchored us defensively.”

The first quarter was all Holy Cross, as UMass (6-3) shot just 4-of-16 from the field and 1-of-9 from three en route to an 18-9 first quarter deficit. Crusaders forward Lauren Manis shredded the Minutewomen inside for three rebounds and eight points in the first quarter, even as UMass combined Donnelly and forward Angelique Ngalakulondi inside to stop her.

“Instead of [Manis] posting up our guards, Maeve Donnelly defended her and did a great job, kind of took her out of the mix offensively,” Verdi said. “They stalled offensively as well – here and there they knocked down some threes, but that’s what they do. But I thought we did a great job down the stretch.”

After that first quarter, the Crusaders were limited to outside shooting. All 18 of their second-quarter points came from behind the arc, as were nine of their 15 in the third quarter. Holy Cross simply couldn’t get going down low, as the UMass defense tightened up.

“Definitely the physicality [improved],” Donnelly said. “We talk every day, we want to be the most physical, the most vocal, and I think that was very apparent.”

Donnelly found herself struggling on defense early in the year, but looked confident on the defensive end Sunday afternoon. Tasked with shutting down Manis after the first quarter, Donnelly held the 6-foot 1-inch senior more or less in check, as Manis finished with just nine more points the rest of the way.

Despite splitting time with the defensive-minded Ngalakulondi in the first seven games, it was all Donnelly on Sunday. Donnelly was out on the floor for 39 of the 40 minutes, while Ngalakulondi only saw six.

“I knew coming in that 25 [Manis] and 10 [Megan Swords] were really good posts, senior posts. They have a lot of experience,” Donnelly said. “So I knew that I had to step up my game, be really aggressive, maximum intensity, and with my teammates’ energy, it felt like it was possible.”

At the end of the game, with Holy Cross making a late push, it was once again Donnelly who bailed out the Minutewomen. After the Crusaders cut the UMass lead to two in the final minute, the Minutewomen were running out of time on the shot clock when Donnelly got open below the basket. Bre Hampton-Bey found her, and Donnelly converted on the easy layup to stretch the lead to four with 22 seconds left, essentially sealing the game.

“She keeps improving, each and every single day,” Verdi said. “Those are the things that we need.”