‘I think it’s just a good draw-together of the good communities of a university.’ 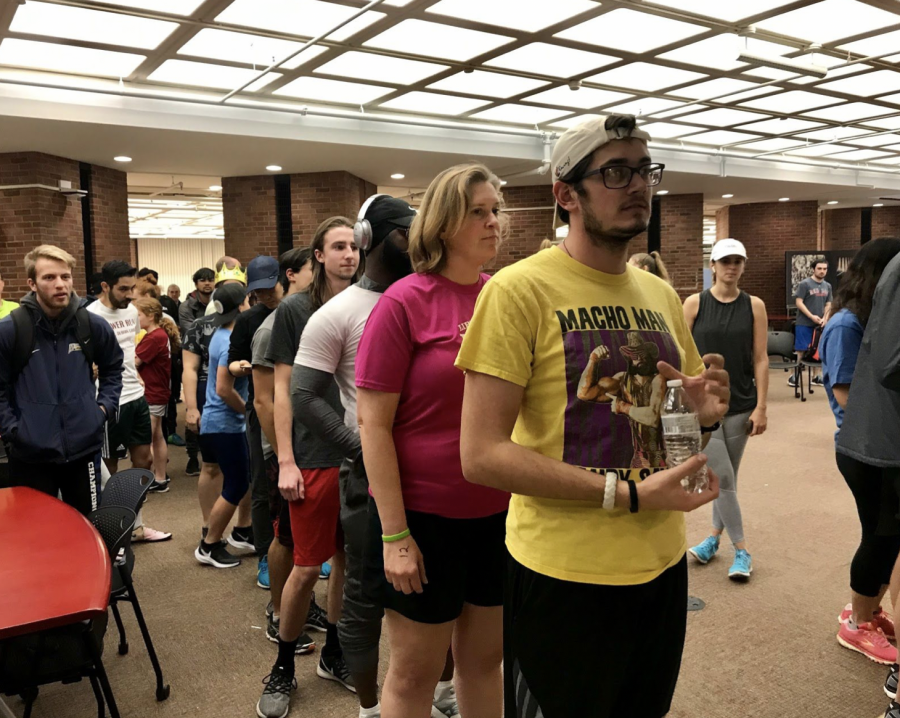 Just under 80 people gathered in the lower level of the W.E.B. Du Bois library on Thursday, Nov. 21 to race the clock in a competition to scale 27 floors and 440 steps.

The fifth annual Tower Run featured a mix of new and returning students, alumni and faculty, roughly double the number of participants compared to last year.

Participants ran up the stairwell in groups of 10 people every five to 10 minutes. The only rules set for participants were to run at their own pace, test themselves to the best of their abilities, maintain good sportsmanship and have a good time.

Lasting about two hours in length, UMass Students of Recreation President Gretchen Keller called the start times for each group while a volunteer on the 26th floor recorded the times for each participant as they finished.

When all the runners had finished, Keller, Supervisor for Strength and Conditioning Sarah Jordan and others determined the winner: at two minutes and 10 seconds, sophomore electrical engineering and math double major Henry Powell achieved the quickest time for the second year in a row, beating his previous record.

“I think just consistently living on Orchard Hill definitely helped a lot, so then that pushed me to improve,” Powell said of his performance.

While some raced for the best time, other participants, like environmental design alumni Tara Borden and veterinary and animal sciences faculty member Richard Goldsby, raced simply to finish.

“I’m hoping to be on par with how I’ve done the previous four years, under five minutes,” Borden said, who has participated in all five Tower Runs. “I think four and a half minutes has been what I’m able to keep at. I hope to do faster, but if I don’t, finishing is winning.”

Goldsby, born in 1934, walks the steps of the library often and heard about the event through a friend who participated last year.

“For people who are a little bit older and feel they need regular exercise regimens, it’s a very convenient way to get some aerobic exercise even when the weather’s not good,” Goldsby said.

USOR, which planned the event, is a Registered Student Organization dedicated to promoting healthy lifestyle choices within the UMass community through a series of extramural and fitness events hosted all throughout the year.

Keller, a junior journalism and legal studies major, said she hopes to improve upon the Tower Run by developing a more efficient timing process for next year, which could include having people arrive at certain times.

She also mentioned other possibilities for next year:

“If we have people register what gender they are, then we could do fastest man, fastest woman, fastest gender-fluid individual, something like that. Maybe prizes next time. Maybe we can do a shirt contest at the gym, and whoever wins the design can have their design printed on the shirts for [the competition].”

Given the success of the event, Keller said that USOR, “might even be doing it next semester potentially.”

Keller creditsMarketing and Outreach Assistant Lauren Weiss and her team at UMass Libraries for collaborating with her and hosting the event. Sponsors also included the UMass Strength and Conditioning Program and UMass Campus Recreation.

Jordan, who worked with Keller on logistical aspects like planning, advertising and t-shirt production, described the event in terms of its setting, saying “not many places have a library that’s 26 floors to run up, and I think it’s just kind of a fun, healthy event that has been going on for a few years now.”

“I’m glad we have this event that draws physical people to academia and academics to physicality,” Powell said of the Tower Run. “I think it’s just a good draw-together of the good communities of a university.”