Minutemen 3-of-19 from deep Saturday 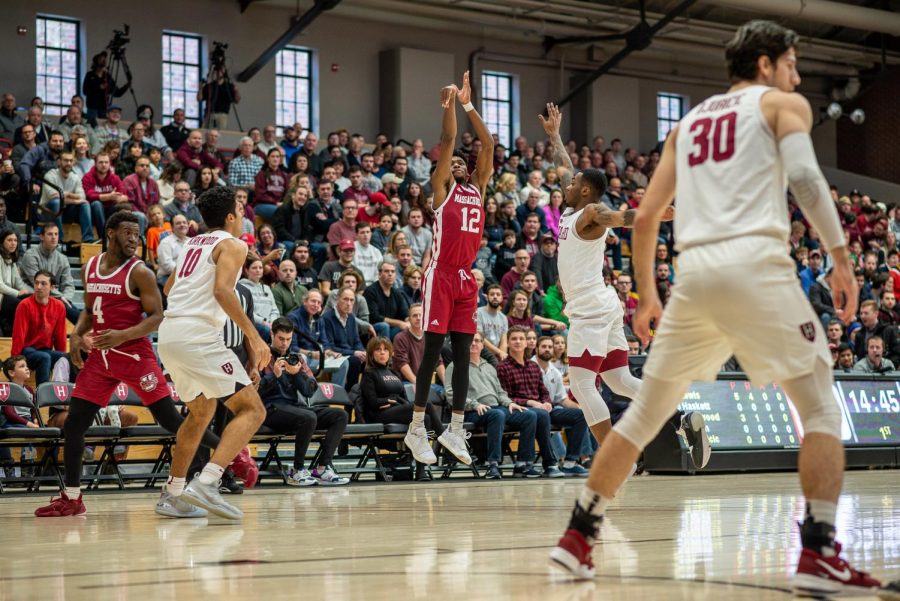 In a blowout loss to Harvard on the road on Saturday afternoon, the Massachusetts men’s basketball team couldn’t get anything to go, with decent looks at the basket coming few and far between and even the open shots refusing to go down.

In their fifth straight loss, the Minutemen (5-5) finished a paltry 19-of-58 from the field and an even worse 3-of-19 from three, as UMass went dead silent offensively in an 89-55 thumping at Lavietes Pavilion.

“I thought we got some good looks, but again, I thought we played selfishly at times, too,” UMass coach Matt McCall said. “Harvard’s a good defensive team, anytime you drive the lane five guys are going to be in the lane; they’re going to shut off drives. I’m anxious to see the tape — how many times did we penetrate and pass out to the perimeter to get ourselves a good look?

While the Crimson (6-4) ran a virtual layup line on the other end, the Minutemen came out ice cold in the first half. UMass shot just 29 percent from the field and went 1-of-10 from three, trailing 41-24 heading into halftime. Harvard lived at the rim, and with a 26-14 rebounding disadvantage, the Minutemen needed to hit some shots; they didn’t.

“Harvard took it to us,” McCall said. “They took it to us off the rip. I felt like just the entire game, everything was a little bit selfish. A little too much me, me, me, I, I, I.”

A lot of UMass’ success this season will depend on its ability to hit from outside, and particularly on sharpshooters TJ Weeks and Carl Pierre. The two struggled again on Saturday, combining to go 3-of-14 from the field in the first half and 1-of-7 from deep. There was a forced look here and there but even the open threes wouldn’t fall, and Weeks’ trusty floater in the lane just wouldn’t go.

“I feel like they weren’t going down,” Pierre said. “Not to discredit them, I thought we could’ve gotten whatever we might’ve wanted, but it’s on us. We just have to be more aggressive and knock down shots.”

After a 24-point half, by far UMass’ worst of the season, the Minutemen showed a bit of life offensively early in the second after a quick Harvard run. A Sy Chatman dunk, two Tre Mitchell buckets and a Chatman and-one put UMass on a little 8-2 run, but that’s about all the life the Minutemen had. The offense stagnated again, devolving into a long stretch of Mitchell post-ups without much else success. Mitchell had his moments, finishing with 13 points, but his 6-of-14 shooting fell in line with the struggling Minutemen.

With 15 turnovers and just five assists, it all went wrong offensively for UMass.

“And when you turn the ball over, you can’t get your defense set, you can’t put the pressure on, you can’t do anything,” McCall said. “That was the disappointing piece.”

Weeks managed to hit a couple of late threes, but Harvard stretched the lead to 24, then 30, and UMass never recovered. The freshman finished with eight points on 3-of-10 shooting and 2-of-7 from three, one of his toughest outings to date.

In five consecutive losses, the Minutemen have shot 37.6 percent from the field but just 23.9 percent from three, a skid marked by poor shooting that can’t mask issues on the other end.

“Adversity’s going to hit, and it’s hitting right now,” Pierre said. “But we have to stay together. If we start growing apart, then it’s over.