No. 9 UMass beats Brown 4-0 to close out the first half 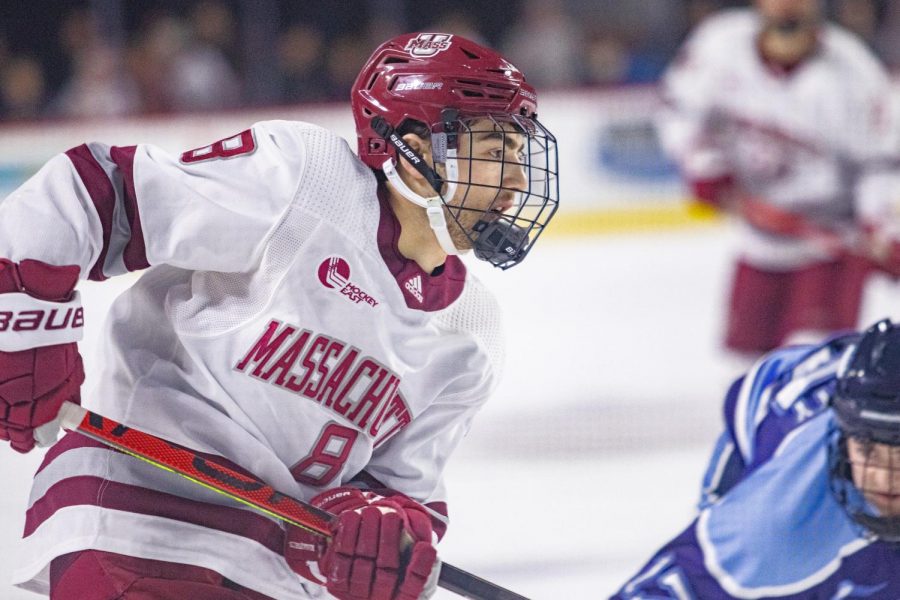 In their last game before a multi-week, end-of-semester break, the Massachusetts hockey team faced off against Brown and punctuated their first half with a 4-0 victory.

“I thought it was a real solid road win,” coach Greg Carvel said. “We got better as the game went on.”

That changed with 12:11 left in the second period when UMass generated a 2-on-1 rush with Philip Lagunov skating with the puck near the right faceoff circle. Lagunov then slid a pass across the slot, narrowly avoiding a sprawled-out Anea Ferrario, to the stick of Oliver Chau who buried a one-time attempt to give the Minutemen a 1-0 lead.

Chau’s night wasn’t done as with 27 seconds left in the second period, he netted his and UMass’ second goal of the night. With time running out in the second frame, the junior forward handled the puck near the slot before sending in a backhand. The high shot beat Brown goaltender Gavin Nieto to put the Minutemen up 2-0.

“Phil Lagunov was a major assist on the first one,” Carvel said, “and drove the net on the second one. It wasn’t just Oliver Chau, it was Phil Lagunov being real crucial and critical on both those goals.”

Chau’s big night follows what has been a productive stretch of games. In UMass’ past four games, Chau has put up six points, including three goals.

“He’s competing harder,” Carvel said of Chau. “He’s committed to being a little more physically involved in the game and he’s just building his confidence. When he’s got the puck on his stick he’s making really good offensive, instinctual decisions.”

The two second period goals came on the heels of scoreless first for both sides. UMass dominated much of the first period of frame but allowed the Bears back into the game late in the frame. First period shots ended 10-9 in favor of Brown.

The Bears were able to outshoot the Minutemen in the first thanks in part to a shift late in the period that saw UMass goaltender Filip Lindberg stop three successive shots to keep the contest scoreless.

“Any time we needed it, Filip Lindberg really bailed us out,” Carvel said. “He made some huge saves tonight.”

The three stops were part of the 27 saves the sophomore goalie made en route to his third career shutout.

The Minutemen stretched out their lead further in the third period thanks in part to a pair of goals in the second half of the frame.

The first of which came with 6:10 left in the game. Zac Jones backhanded a shot on net that Nieto blockered away. John Leonard then worked his way to the loose puck and wristed home the shot to give UMass a 3-0 lead.

Less than a minute later, the Minutemen were gifted an odd-man rush when the Bears botched a line change. Reed Lebster skated in on net with the puck, one-on-one with the Nieto. Lebster put the puck on his backhand and slid it between the Brown goaltender’s five-hole to put UMass up 4-0 with 5:12 remaining.

The game closed out the first half of play for UMass who will continue its season in 19 days when it heads to Rensselaer.