Inside scoring, blocking give UMass the edge to defeat the Crusaders 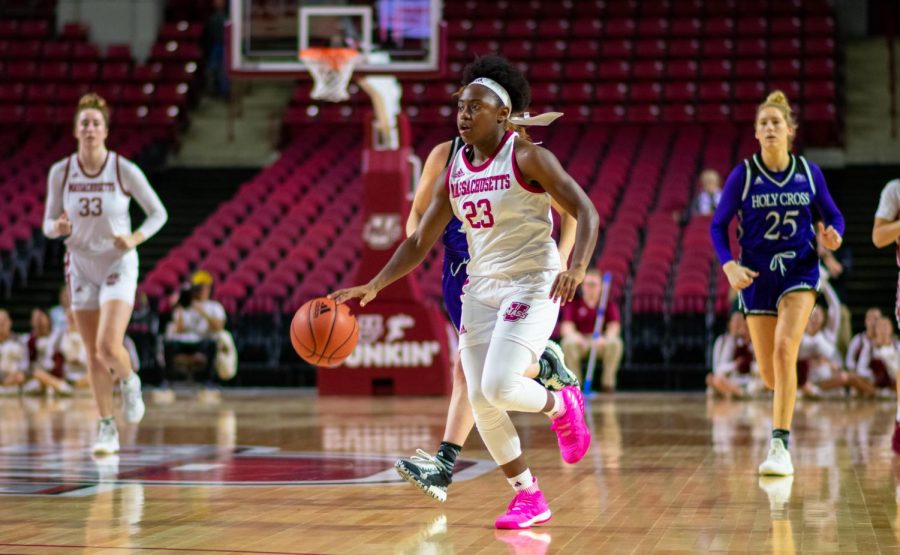 The Massachusetts women’s basketball team has given its fans plenty of reasons to bite their nails over their past couple of games, but for the second time in a row UMass (6-3) came away with the late victory.

“Great win for our program,” UMass head coach Tory Verdi said. “We faced a veteran Holy Cross team. You look at their seniors, they’ve been through it. That’s a team that I think could win their conference.”

In the first quarter, the Minutewomen got off to a slow start and were doubled in scoring by Holy Cross (4-3). At one point, the Minutewomen were 1-9 on 3-point attempts, although they converted their last two threes of the first half to stay within four at halftime. The third quarter started off slowly, but UMass managed to outscore the Crusaders by seven and take a three-point lead going into the fourth quarter. The Minutewomen continued their solid play well into the fourth quarter, but the Crusaders managed to fight their way into a single-possession game in the final 30 seconds of the game before UMass ultimately won, 75-72.

For the Minutewomen, Vashnie Perry scored 20 points while Maeve Donnelly picked up 12 rebounds and 10 blocks. Perry, who has struggled with efficiency in previous games, managed a 60 percent clip on 9-15 shooting while going 2-5 (40 percent) from beyond the arc. Perry, who is known mostly for her defensive contributions, managed only one steal on the very first play of the game, but more than made up for her not-so-prolific defensive stats on the offensive end.

“I think what made me do so well was that my heart changed, and my mindset changed completely from the last game,” Perry said. “I noticed that we were kind of in a slump. Senior year, give it all every single time you can, every chance you can. I think I did that.”

The 10 blocks in addition to the 39 minutes played were a career high for the freshman Donnelly. Although she only managed to contribute seven points, her defensive presence provided the perfect complement to Perry’s offensive explosion. Unlike other points this season, Donnelly appeared confident, calling for the ball and having an imposing presence inside.

“We talked about [our slow start],” Donnelly said. “They were hitting big shots and we weren’t, so we’re like, ‘The shots will come if we keep our energy going, we keep talking, keep playing hard defense. Our shots will come, we’ll start making them. Then, we’ll get back in this game,’ and that’s what we did.”

The win over Holy Cross was huge for the Minutewomen after keeping it close with struggling New Hampshire (3-6). For their next test, UMass is looking to keep the momentum going against Boston University (3-4). Going on the road after a two-game homestand, the Minutewomen will look to apply defensive pressure to a BU team that has scored 60 points in six of its seven contests.