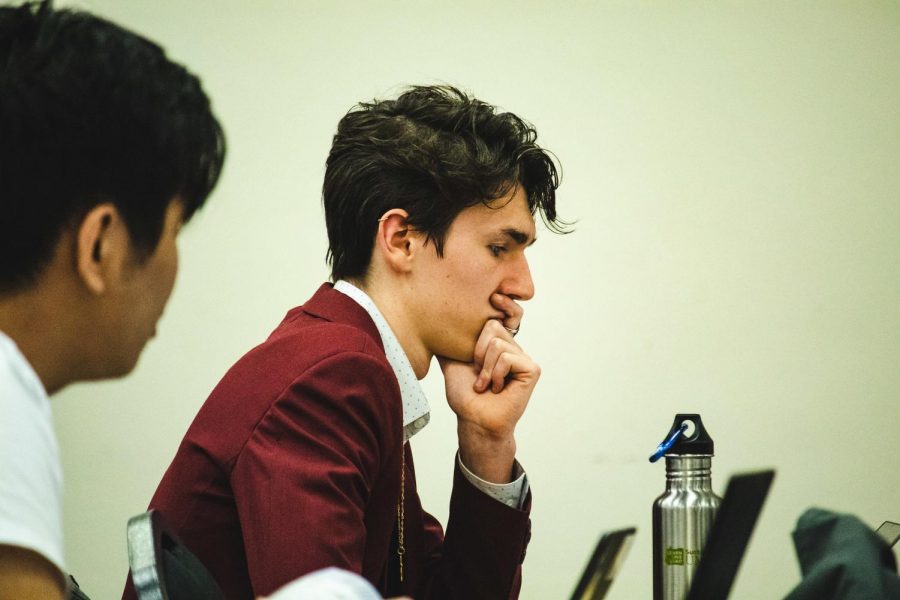 By Sophia Gardner and Kathrine Esten

Student Government Association President Timmy Sullivan was impeached in a 38-13 vote on Wednesday, following a report by the rules and ethics subcommittee focused on over $1,000 in “overreported funds” in the spring 2019 semester.

The meeting, which took place in the University of Massachusetts Campus Center on Wednesday night, lasted more than five hours as the subcommittee read its report, speakers fielded numerous questions from senators and members of the public, Sullivan defended his records and senators debated. The meeting was presided over by SGA Chief Justice Aditi Joglekar.

Sullivan remains in office with the impeachment charge and the case now goes to the Student Judiciary, which will determine if Sullivan will be removed from office.

With the affirmative vote, Sullivan became the first SGA president to be impeached, according to Joglekar, who noted there is no precedent for how the judiciary should proceed with the impeachment charges. If Sullivan is removed, Speaker Rachel Ellis would become president under the SGA bylaws.

“Timothy Sullivan has undermined the integrity of his office, has brought disrepute on the Presidency, has betrayed his trust as President, and has acted in a manner subversive of the Bylaws of the Student Government Association, to the manifest injury of the students of the University of Massachusetts,” the articles of impeachment state.

Allegations against Sullivan first came to public attention when a petition for impeachment was filed with the committee of administrative affairs, who formed a subcommittee on rules and ethics. The investigation was announced at an SGA meeting on Oct. 30. Over several weeks, the subcommittee made numerous records requests, conducted interviews with involved individuals and developed a report. In the report, the subcommittee voted unanimously that three bylaws were broken by Sullivan and his administration during the 2018-19 academic year. Two of these bylaw violations were deemed to be unethical by a majority vote.

On Nov. 29, the subcommittee voted 3-1 in favor of bringing charges of impeachment before the senate. The chair of the subcommittee, Liron Burstein, abstained as his tie-breaking vote was not needed.

“When a bylaw is broken, and it’s broken unethically, that person probably should be impeached,” subcommittee member Jordan McCarthy said during the presentation of the report.

While the report addressed several allegations of bylaw violations, the articles of impeachment presented to the senate were divided into two articles. The first addressed Sullivan’s failure to submit a nominee for vice president to the senate within 30 days of Nathalie Amazan’s resignation in February. According to the article of impeachment and the subcommittee report, Sullivan began receiving extra pay during the pay period beginning on Feb. 3.

“At this point, he had already started receiving extra pay for vacant positions and did not tell Senate the money was going to his personal accounts,” the article states. “This money could have instead gone to another appointed person with time to dedicate their full hours to the position.”

The article notes that the extra pay continued after a new vice president, Hayden Latimer-Ireland, was sworn in on April 1. As someone was filling the role of vice president at the time, the subcommittee determined that “[Sullivan’s] excuse…is no longer viable at this point.”

The second article of impeachment cited vacancies in two cabinet positions: secretary of technology and chief of staff. Sullivan chose not to fill the positions and these decisions were not reported to the senate. While two applications were received for secretary of technology, according to records received by the subcommittee, Sullivan gave no reason to the senate in the spring as to why the candidates were deemed unqualified and later stated incorrectly on Oct. 30 that there were no applicants.

Addressing allegations that he “lied” to the senate by misstating the number of applicants, Sullivan said at the meeting, “I discovered that I misremembered the details from eight months ago, and upon discovering this, I made sure to include it in my starting statement with the committee to clarify this honest mistake.”

The article of impeachment also notes that the president did not notify all applicants of their acceptance or rejection, which is required under the bylaws. Sullivan claimed in an email to the subcommittee that he informed the four applicants, the two for vice president and the two for secretary of technology, that they would not be receiving an interview.

Solomon Bennett, the sole member of the rules and ethics committee to vote against bringing charges to the senate, stated that the violations didn’t necessarily have ill intent and in many cases were accidental.

“When you have neglect that’s accidental, you have to look at context,” Bennett said, adding that he felt the violations did not warrant impeachment.

Multiple members of the subcommittee, including Burstein and McCarthy, emphasized the investigation was carried out with the presumption of innocence, and Bennett stated that “it was not an easy decision” to determine the ethicality.

Bennett acknowledged he was “tangentially involved” with the Sullivan campaign in the spring elections but insisted that all members of the subcommittee had remained objective and considered the facts.

“I didn’t have my mindset until I had seen all of the facts,” Bennett said. “I’m confident in my reasoning thus far.”

According to Burstein and McCarthy, members of the subcommittee were awake until 2 a.m. on Wednesday finishing the report and until 4 a.m. finishing the presentation for the SGA meeting that night.

In their presentation, the subcommittee highlighted a contradiction between Sullivan’s claim that he discussed his increased pay allocation with SGA advisor Lydia Washington and former Secretary of Finance Victoria Ishola, referring to the process as “normal and procedural” in an Oct. 30 senate meeting.

However, in an interview with the subcommittee, Washington revealed she advised Sullivan not to increase his pay in this way.

“As an advisor, I did not recommend that he do this,” said Washington, according to the interview minutes obtained by the Collegian. “In previous years, presidents have not done this.”

While other allegations included in the original petition for impeachment or considered in the investigation were referenced by the subcommittee members, various officials in the SGA and Sullivan, the article of impeachment remained the focus. At one point, Sullivan claimed the investigation had only proved payroll malpractice by former Speaker Ryan Mahan and that the emphasis on claims against him had overshadowed other wrongdoing.

During debate, a few senators agreed with Sullivan, claiming the entire process had been politicized and was against progressive policies initiated by the Sullivan administration. Others emphasized there was no ill intent in the actions and felt impeachment was too extreme.

“The actions that President Sullivan took within everything that’s been outlined was to further [the SGA’s mission] and to meet [the SGA] goals,” Sonya Epstein, the secretary of University policy and external affairs, said. “It’s not unethical… that is a key part of this, the ethicality of it.”

However, a greater number of individuals spoke in support of impeachment, claiming that Sullivan’s negligence was unacceptable when Registered Student Organizations are held to extremely high standards.

Jake Binnall, the student trustee, criticized the president for “fact-checking” after making reports to the senate, claiming it was an attempt by Sullivan to “cover his own ass.”

“There are leaders of RSOs who do so much more work than people in this room,” Binnall said, adding that it was a “spit in the face” to student organizations to not hold SGA officials strictly accountable.

Reflecting on the investigation, Burstein stated he didn’t realize before “that there was really no oversight over payroll,” as the advisor is responsible for making sure the SGA doesn’t overspend, not necessarily what funds were spent on.

Several members of the subcommittee expressed hope that they would be able to work on bylaw reform as part of Administrative Affairs.

“This [the investigation] has become almost the sole focus of the Administrative Affairs committee this semester,” Burstein said, adding that the committee has not been able to put forward as many motions with a majority of their time being dedicated to the investigation. “All the voting members are…volunteering our time to do this, basically thrust into a full-fledged investigation.”

“We had to manage a lot of people’s schedules, [make sure] that all the meetings were publicly accessible [and there were] a lot of legal trainings we had to do,” Burstein added, noting there was no established precedent for the investigation. “A lot of immediate follow-up [if Sullivan is removed] would be hectic for the SGA, but [it] would hopefully ease tensions in the long run.”

“I hope that everyone keeps in mind that we’re all students and this process isn’t something any of us want to be doing,” Burstein said.  “I joined the SGA to work for students, and not against students.”

McCarthy added, “I think that with President Sullivan replaced, it would make the SGA more effectively be able to serve students.”