Starting Five: To press or not to press

Diving deep on the press defense 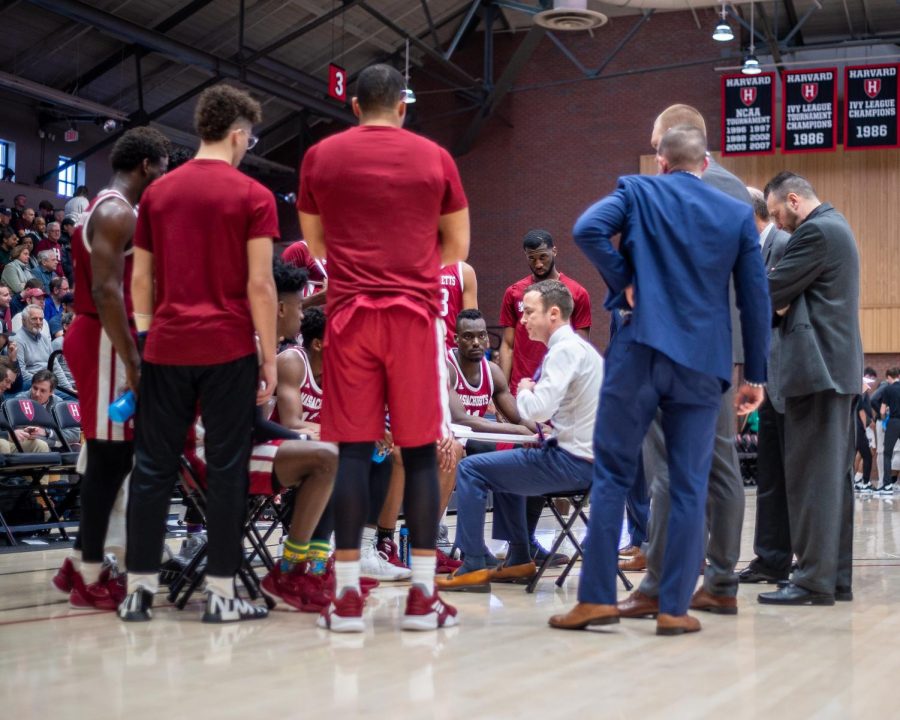 What a difference a few weeks makes.

The last time I wrote one of these, it was Nov. 20. The Massachusetts men’s basketball team was 4-0, spirits were high and expectations were higher. The Minutemen then beat Rider to move to 5-0, went on to lose five in a row, and now sits at 5-5 after getting blown out of the gym by Harvard on Saturday. It’s a whole new world.

We’re going to talk a lot about the press today. The short version: it was rough on Saturday, but I do think it’s worth trying and I do think Matt McCall, Tony Bergeron and co. are well capable of ironing out the wrinkles.

Also, there will be some math today. Not a ton of math, but some math. If you’re not big into stats, this may not be the one for you.

1. Much ado about pressing

Coming into the season, McCall made it pretty clear that UMass would be pressing this season, a promise on which he’s delivered. With Bergeron bringing his litany of press defenses to Amherst — and a few Woodstock products already comfortable with them — the Minutemen pressed from the jump, and the early results were mixed. The press was a mess in the opener against UMass Lowell, but started to come together against Fairfield. It looked pretty solid against Northeastern and Central Connecticut State — in losses against Rutgers, South Carolina and Harvard, it was a mess once again.

Saturday’s 34-point loss to the Crimson is UMass’ biggest defeat of the decade — since 2010, the Minutemen had not lost by more than 33 until Saturday’s trip to Cambridge.

Tommy Amaker’s team sliced through the press without much trouble, and the numbers are rough. I went back and noted every instance in which UMass tried to press: the result, the time it took the Crimson to get over half court and what type of press the Minutemen ran.

McCall mentioned after Wednesday’s loss to South Carolina that UMass was getting killed when they ran an odd-man front. The Minutemen have a few different press defenses: a diamond, a 2-2-1, a two-back, something that I think is called “Florida”; in any case, a press like the 2-2-1 is an even-man front with two guys up high pressuring near the inbound. A press like the diamond, with one man back to defend and the other four in a diamond formation, is an odd-man front with one guy up near the inbounder. This will become important in a bit.

By my count, UMass broke out the press on 22 occasions, largely off of made baskets or offensive fouls, when they had time to set up. The results weren’t great.

On those 22 possessions, Harvard scored 32 points and found its way over half court in six seconds or less 18 times. For the season, the Crimson have scored 1.02 points per possession, a modestly above-average mark that ranks 94th nationally. Against UMass’ press, Harvard scored 1.45 points per possession, a sky-high mark — to put it another way, the Crimson were almost 50 percent more effective offensively against UMass’ press compared to their usual numbers through the first few games.

Harvard had 69 possessions on Saturday, so their remaining 57 points came on the 47 possessions the Minutemen didn’t press, for 1.21 points per possession. That’s a high mark, but it’s nowhere near as bad as that 1.45 number the Crimson put up against the press. UMass forced three turnovers and drew two fouls.

This is a press-heavy column, I know — but the press could make or break UMass this season, and there’s a lot of work to do.

When you split the results by fronts, the even-man front presses look a little better. McCall broke out an even front a majority of the time, and on the 16 possessions UMass had two men up, Harvard scored 19 points, or 1.19 points per possession. It definitely isn’t great, but it’s not awful.

It took the Crimson about five and a half seconds on average to get across half court against the even fronts, but it didn’t do a ton to get them out of a rhythm or force turnovers. Two of the three turnovers came against even fronts, but both occurred after Harvard was in the frontcourt.

This is probably the best even-front press of the day — off a Mitchell bucket, Carl Pierre and TJ Weeks isolate Bryce Aiken in the backcourt.

The rotations are good, as Keon Clergeot stays with Noah Kirkwood at midcourt — that centering pass was an issue — and Samba Diallo quickly rotates to cut off Justin Bassey when Aiken throws it to the right side, while Pierre is in position to either cut off a pass to Robert Baker on the near side, or try and trap Bassey if he gets across half court.

It’s all undone when Diallo gets hit with a blocking call, but it funneled Harvard toward some difficult decisions, which is the whole point.

This one is not the best — it looks like UMass has two back, and Preston Santos and Sean East immediately trap Christian Juzang in the ball-side corner. But Diallo can’t cover Bassey and Chris Ledlum at the same time, and in two passes and three seconds the Crimson get across. UMass forces a travel at the end of the possession, so it’s a successful defensive stop, but not because of the press.

Overall, the even fronts weren’t great, but they weren’t terrible. But you can’t throw out the same look every time, which brings us to the odd fronts.

Here’s where it gets a little rough. On seven occasions, McCall threw out on odd-man front, and the result was 13 Harvard points as the Crimson got across half court in about four seconds even. That comes out to a moderately horrifying 1.86 points per possession, a number obviously inflated by a very small sample that should not be used to draw any large conclusions about the press as a whole, but, yikes.

Whether it was a 3-1-1 or a diamond or whatever — it’s hard to recognize defenses on film because shifting camera angles and quick inbounds mean they become fluid very quickly — the odd fronts really struggled on Friday.

This one is okay. When Bassey catches it on the near side, there’s a chance to trap if he comes across half court, Tre Mitchell can cover the long pass to Mason Forbes, Weeks can rotate back to Kirkwood and Pierre can deal with Baker. But Chatman slips, Weeks takes one wrong step away from Kirkwood, and Harvard has a 3-on-1.

Basically, at this still, UMass is okay. A bit stretched, but okay. 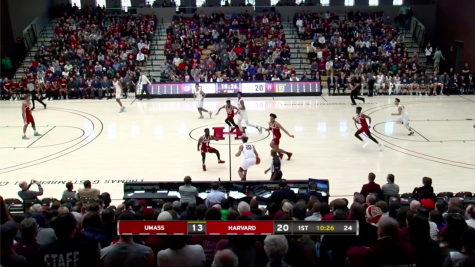 At this still, Mitchell’s hung out to dry. 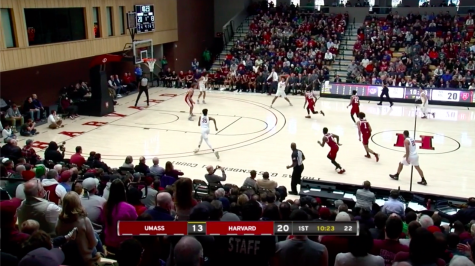 Of the odd fronts, this is probably the worst one. I’m not sure I need to do a ton of analysis.

I want to be super clear that my take is absolutely not that UMass needs to ditch the press. There’s a reason Bergeron has been successful with it and there’s a reason it worked against Northeastern especially. But smart, well-coached teams like Harvard and South Carolina have taken advantage of it at times, and it’s obviously in need of some work.

For those who think McCall sticking with the press is a “lack of adjustment” — I think he’s playing the long game. Stick with the press, get your guys some game reps in the hopes that it’ll pay off in conference play. I could be wrong, but I think that’s the idea. Suppose we’ll see.

4. Who needs spacing when you’ve got defense?

At the end of a first half in which the Minutemen were outrebounded 26-14, had fewer defensive rebounds than Harvard did offensive rebounds while giving up far too many points in the paint, McCall shifted his approach. He threw out a lineup of Clergeot, Pierre, Santos, Chatman and Djery Baptiste — a five with nightmarish spacing, but potentially the best combination of defense and rebounding McCall has at his disposal. The results were actually really encouraging.

That group played the final 3:45, five total defensive possessions. First, they shut down the Crimson and Clergeot drew a charge, before they forced a shot clock violation on the following possession.

Then they forced a turnover, shutting down a Ledlum drive — he’d killed UMass inside all half — and forcing the Harvard freshman to throw it away.

On the penultimate possession of the half, the Minutemen put together another solid defensive sequence, before Santos blocked Henry Welsh at the rim for another turnover. Santos’ block was deemed goaltending — a call so awful that you can see Welsh laughing at the end of this clip, because he’s well aware that was never goaltending.

McCall was as heated as anyone in the building and gave the referees an earful for a full minute, and earned a technical for his troubles. Aiken hit both. UMass then forced a turnover on the final possession.

So, five possessions: a charge, three turnovers, including the shot clock violation, and a block that was erroneously called as goaltending that led to two technical foul free throws. In four minutes, that five shut down Harvard, and the only four points they gave up came through no fault of their own, with a bad goaltending call and McCall’s tech — five chances, five stops.

As much as this lineup struggles offensively without Weeks, East and Mitchell, man it got the job done defensively. I love lineups with shooting and spacing, but this might be a look for McCall to explore further.

A fun clip to round this one out, as Sy Chatman found himself some new poster material.

Chatman has had his issues; 12 turnovers in five games is not what you want, and his 3-point shooting and decision making can occasionally leave something to be desired. But man, he makes for some fun highlights.