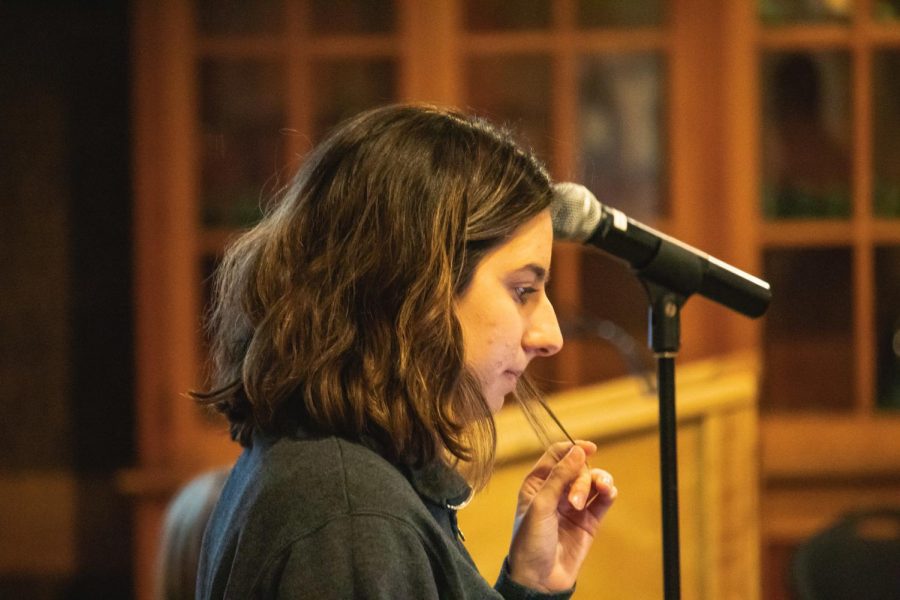 On Wednesday night, the University of Massachusetts Student Government Association began their final meeting of the year with a presentation by two University representatives explaining the University process for submitting their budget for the next fiscal year. The proposed campus budget will be around 1.6 billion in the new fiscal year, but the specifics were not included because the budget has not yet been finalized.

UMass’ budget has dropped from being 50 percent state funded in the 1950s to 20 percent, according to Vice Chancellor of University Relations John Kennedy.  This drop in funding is inconsistent with the school’s increasing attendance rate.

The presenters named financial aid as being one of the major costs that need to be factored into the budget. The University gave out 180 million in financial aid last year. “It’s a huge part of our obligation but it’s also a huge cost driver for us,” said Chris Dunn, executive director of government relations for the University.

The presentation ended with a reminder for the SGA why public education is important. “Every year, we welcome the most academically accomplished class in our history . . . this is a critically important institution to Massachusetts,” said Kennedy.

The SGA also saw a presentation regarding the Student Experience Master Plan, which was a series of studies that took place at UMass in 2016. The goal of the study was to “create a vision for student experience that is distinctive, place-based, comprehensive, immersive and inclusive,” according to the presentation.

This study included several of the current projects underway on campus, such as the construction of the new Worcester Dining Commons and the renovation of the Fine Arts Center, as well as the upcoming residential life master plan.

Also during the meeting, Shelly Perdomo, assistant vice chancellor of the advocacy, inclusion and support programs at the University, spoke to the SGA to clear up any concerns about the current plan to relocate the cultural centers to Goodell. “There are a number of concerns and a lot of misinformation out there, so I want to just provide information,” said Perdomo.

She specified that this decision was heavily based on five years of input from students about the location of cultural centers, and that the University believes that it is time to act on this input. “Everyone did not necessarily agree to this approach and in our meetings we’ve made that clear,” said Perdomo. “There comes a point in time where you need to stop collecting data and move forward.”

The audience expressed several concerns about the move. One of these concerns was that having one centralized space for cultural centers in the middle of campus might further single out students of color. “I feel as though, at least for me, being moved to Goodell would create more of a spotlight,” said Zachary Steward, a sophomore Afro-American studies major.

The SGA approved a motion to get 12 questions about the Goodell move answered by those involved in the planning of the relocation in the form of a frequently asked questions document. This document would then be made available to students and help clear up some of the misconceptions around the issue. “These are common questions which we’ve been hearing over and over again in our meetings with student groups and cultural centers, so this is basically us doing our job and working with the University to answer these questions,” said Carla Montilla, chair of the social justice and empowerment committee.

The motion also suggested that the University work more closely with the SGA and other affected students in the future.

The SGA also approved a motion to support UMass filling the empty Tribal Liaison position. The former Tribal Liaison, Rae Gould, left UMass in the spring 2019, and since then the position has been left empty.

The SGA hopes that the appointment of a new Tribal Liaison would help the University’s Native American community feel more represented. “The Tribal Liaison position is so important to be that bridge between UMass and the tribes that [are] in Amherst, in the surrounding areas,” said Lily Tang, secretary of diversity.

The SGA also approved a motion to support UMass extending the litigation authority granted to Student Legal Services Office by the Board of Trustees. This authority allows SLSO to have certain powers when representing students legally. “The litigation authority is literally our ability to represent students in a variety of cases,” said Bernadette Stark, the director of student legal services.

SLSO’s authority needs to be renewed every 10 years, so UMass’ extension of the litigation authority will allow SLSO to continue operating for the next 10 years, but not increase or change the amount of power that they have.

“This would essentially allow us to continue to do the work that we’re doing representing students for at least another 10 years,” said Stark.

The SGA also wants to look into expanding the powers of SLSO services in the future.

The final motion was to voice the SGA’s support to encourage Amherst College faculty to reconsider their opposition to a recent low-income student housing development.

Amherst College professors and faculty signed on to a letter in May which advised against the construction of this development. The affordable housing was supposed to be constructed near Amherst College, which stemmed the controversy. The language of the letter was described as classist by senator Timothy Scalona.

The letter stated that the housing would “negatively impact surrounding communities,” implying that low income student housing is a negative for a residential area, according to Scalona.

The senate approved this motion and stated that they hope to work with Amherst College’s  student government in opposition to this letter.