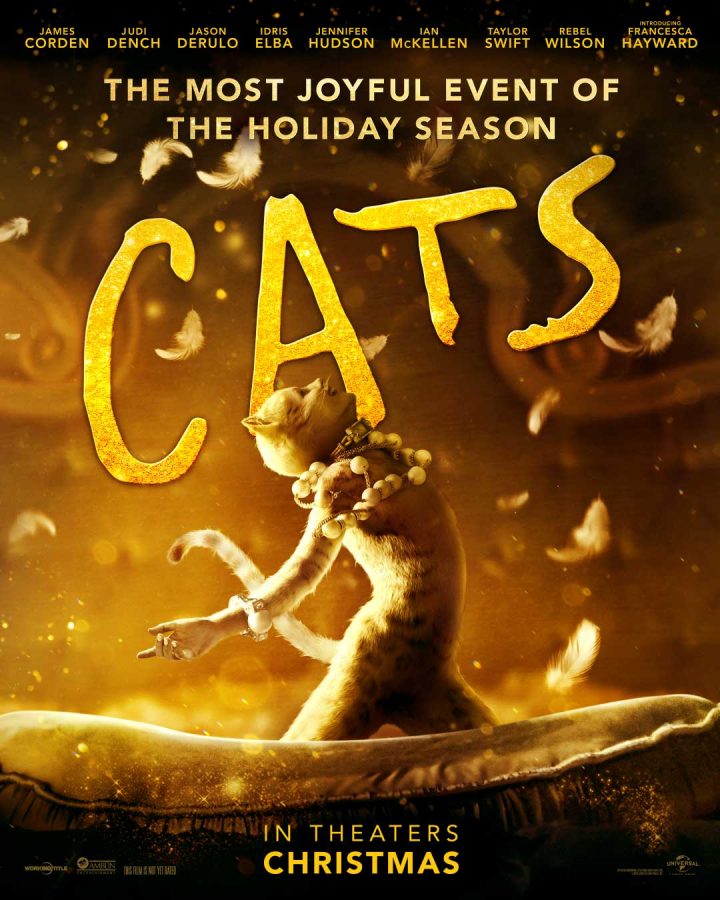 A brief scroll through Taylor Swift’s Instagram timeline and you will be able to discern that the singer is thoroughly obsessed with cats. Swift is notorious for dropping clues regarding her upcoming projects to the public and last January she began teasing photos from a role unlike any she’s ever played before. Her next project is not the role of singer but of actor in the live-action adaptation of “Cats,” premiering in theaters on Dec. 20, alongside an all-star cast: Jennifer Hudson, Jason Derulo, Idris Elba, Rebel Wilson and many more.

Remaining true to her singer-songwriter roots, Swift contributed more than her acting skills to the project. She also co-wrote an original song fittingly named “Beautiful Ghosts” with the musical’s composer Andrew Lloyd Webber for the movie’s soundtrack. Swift released the track on November 15, a little over a month before the motion picture’s screen debut and the poignant lyrics offer insight into the musical’s equally heart-warming and heart-wrenching plotline.

The musical itself is inspired by T.S. Eliot’s collection of poems “Old Possum’s Book of Practical Cats” and is currently the fourth longest running production in Broadway’s history. The musical follows a group of stray and abandoned “Jellicle cats,” who roam around the streets of London. On the specific night of the musical, the tribe of cats are all destined to reunite under the Jellicle moon to determine who amongst them will be reborn into a new life and ascend into the Heaviside Layer. To be reborn is nothing shy of the utmost honor to their tribe. Throughout the show, the audience witnesses each of the character’s pitches as to why they should be the chosen cat through their performances through their own songs.

While the movie adaptation consists of many of the same premises, Webber has indicated that the story will be told through the eyes of the youngest member of the Jellicle cat family, Victoria (Francesca Hayward). In the movie, “Beautiful Ghosts” is sung by Victoria but Swift sings the studio and single version. A few weeks before the release of the song, Swift posted a video with a glimpse of the song in which she and Webber discussed why the song was added to the acclaimed soundtrack. Webber, being knowledgeable of Swift’s songwriting skills, called upon her personally to help co-write the song. Prior to writing the song, Swift had begun to devour T.S. Eliot’s work because she wanted his poetic cadence to remain as strong in the song as it is throughout the rest of the soundtrack.

“T.S. Eliot is such a specific type of writer. He uses such specific language and imagery and in reading through his work, and I just really wanted it to reflect that.” She continued in the video, “You can’t write a modern lyric based on T.S.’s work.”

In addition to being the youngest Jellicle cat in the movie, Victoria is a stray cat and her experiences are mirrored in the haunting melody of “Beautiful Ghosts.” The song is meant to be a reaction to another main character/cat, Grizabella (Hudson), who is continuously rejected and shunned by all the other cats. Victoria sees this and comes to the bitter conclusion that she will never have experiences like that, this theme is strikingly evident in the chorus of the song, “All that I wanted was to be wanted / Too young to wander London streets, alone and haunted.”

Swift, along with being a fan of the musical, started her musical career in theater and those origins become evident in her voice as she sonically matches the song’s largely haunting melody. In contrast with her audience being accustomed to her belting out either a country or pop inflection, “Beautiful Ghosts” is very theatrical with a whole orchestral accompaniment that plays well with Swift’s vocal range. As she goes from soulfully crooning in the first verse to the mounting crescendo in the song’s bridge when she belts out, “And I know that this life isn’t safe, but it’s wild and it’s free.”

Swift is known for creating parallels within her music and she does not disappoint with “Beautiful Ghosts.” The first line in the aforementioned chorus is actually from a previous song of hers entitled “Fifteen” which could be a reflection of Victoria’s innocence being stolen at a young age, while finding happiness regardless. Similar to Taylor Swift who has already struck a chord with an audience weeks before the theatrical release.