Minutemen get nothing going offensively 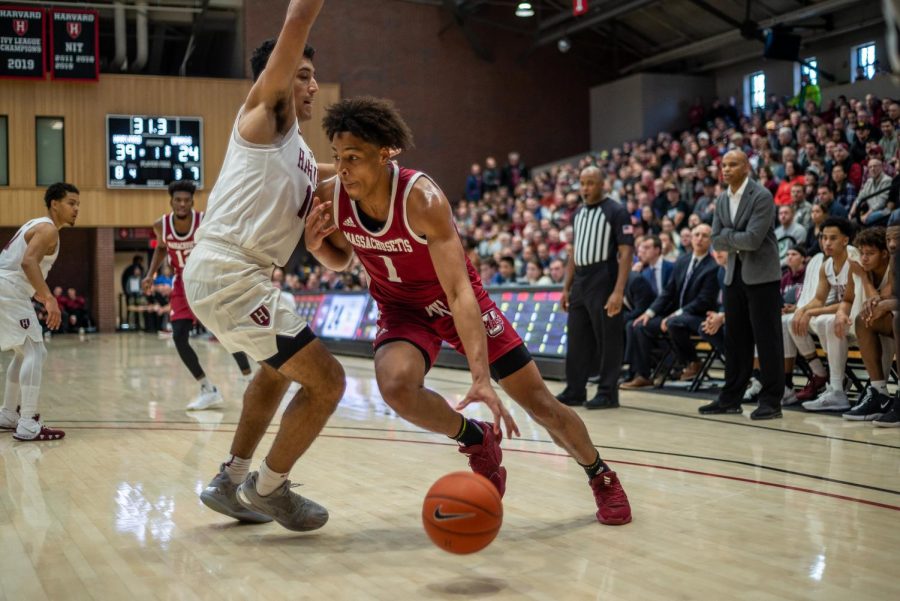 To put it kindly, it was one of the ugliest games of the season for UMass.

The Massachusetts men’s basketball team suffered its fifth straight loss of the season to a Harvard team that simply dominated all game in an 89-55 blowout. UMass (5-5) was ice cold from the start of the game shooting and couldn’t get in a rhythm offensively at all. For a team that relies heavily on the three-ball from their wing players TJ Weeks and Carl Pierre, the Minutemen went a combined 3-of-19 from deep.

Harvard was stellar in all facets of the game and dominated on both ends, while UMass simply couldn’t get anything going due in part to Harvard’s defense.

“I don’t know if there was anything in the game today that we did well.”

The Crimson (6-4) killed UMass with rebounds defensively and offensively, outrebounding them 40-27 on the boards and grabbing 28 defensive rebounds compared to the Minutemen’s 12.

The Minutemen couldn’t find a solution to the sharp shooting of forward Robert Baker and Noah Kirkwood, who went a combined 5-of-9 from three and accounted for 38 of the 89 points that Harvard had. The Crimson shot 58.2 percent from the field to go along with 42.1 percent from three-point range.

On the other side of the ball, UMass was shot poorly and couldn’t facilitate any offense against Harvard’s defense. For a team that averages 70.9 points a game, UMass fell well short of that number against the Crimson. The duo of Pierre and Weeks couldn’t get any shots to fall for UMass, and the Minutemen went 1-of-10 from three in the first half.

Pierre was the lone player to knock down a three, a drastic change from the UMass team that headed into the Virginia game shooting 43 percent from deep. UMass shot 29 percent from the field in the first half and didn’t look close to the team that started the season 5-0.

“To start the game, we are shooting one-legged runners in the lane and we are shooting just bad shots when you got to penetrate to pass,” McCall said. “When you turn the ball over you can’t get your defense set, you can’t put any pressure on, you can’t do anything.”

Early in the season, McCall mentioned that not every night will TJ Weeks put up numbers similar to his 6-of-6 from 3-point range against Rider where he was absolutely red hot, and that was the case against Harvard. It wasn’t until the end of the second half where Weeks knocked down his only two three-pointers of the game after going 0-of-3 from deep in the first half.

“TJ wants to win.” McCall said. “He’s about the right things, he’s about the team. He struggled tonight shooting the basketball and we’ve got to continue to help him defensively trying to move his feet. We need his scoring when he’s out there.”

Along with Weeks, Pierre couldn’t get anything going from the field either, and only managed  two points in the second half on two free throws to add to his total of 10 points overall. The junior guard went just 2-of-10 from the field.

“Adversity is going to hit, and it’s hitting right now, but we have to stay together. If we start growing apart then it’s over. I’ve seen it happen before,” Pierre said.

The Minutemen square off against Yale in a home matchup at the Mullins Center Wednesday night, looking to end their five-game losing streak.