UMass looks to get back on track against Maine this weekend

Minutemen looking for more desperation against the Black Bears 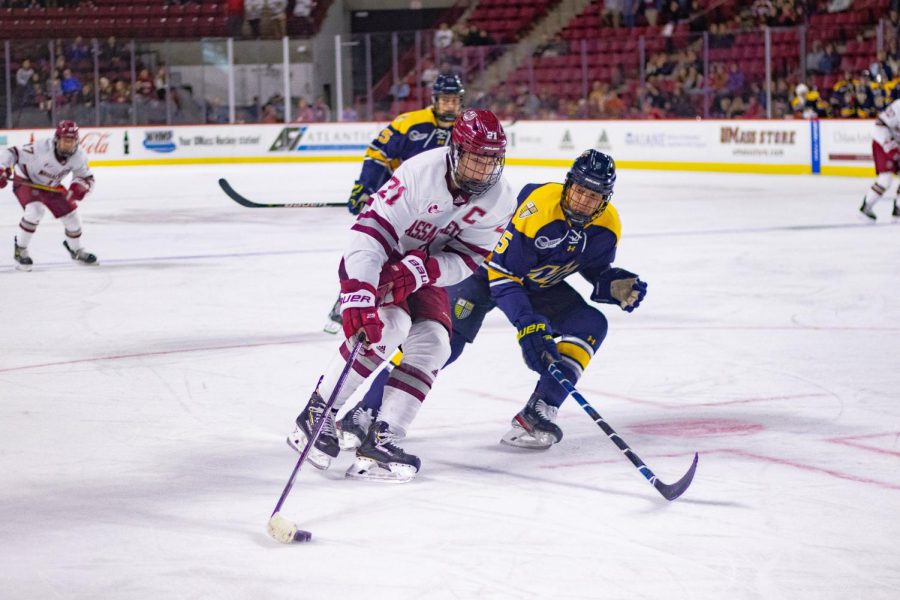 A lot rides on the two games at home this weekend for the Massachusetts hockey team’s against Maine.

UMass (9-4-1, 4-3-1 Hockey East) looks to get back on track after losing its last game against Quinnipiac — its first loss at the Mullins Center in almost a year.

“We need to be better,” UMass coach Greg Carvel said. “We weren’t very good to start the game against a very well-coached team that was desperate and that’s usually the difference.”

Things aren’t going to be any easier this Friday night. Maine (8-5-3, 4-4-2 HEA) has surprised many this season, as it currently sits tied for fourth in Hockey East with 10 points – one more point than the Minutemen in division play.

Mitchell Fossier, the Black Bears’ leading scorer, ranks tied for 10th in college hockey for points with 19. Maine’s led in net by Boston Bruins draft pick Jeremy Swayman, whose save percentage of .938 ranks tied for eighth in the country.

“It’s a team that had low expectations because they lost a lot of their back end,” Carvel said. “They’ve just come out and played harder than the other team. I’m not sure what their record is, but I think they’re better than what most people expected them to do. Red [Gendron] does a good job there.”

The advantage for both teams may lie in their special teams play. Hint: don’t expect many power play goals this weekend.

UMass has been a tale of two extremes this season: an elite penalty kill and a dreadful power play. When shorthanded, UMass kills it off 89.7 percent of the time, which is good for eighth in the nation. But when on the man-advantage, it ranks 47th, scoring 14 percent of the time.

Maine’s somewhat similar. Its penalty kill has been almost as good as the Minutemen’s, as they’ve killed off 88.2 percent of penalties committed – that ranks tied for 10th in the nation. Its power play hasn’t been as bad as UMass’, but it’s still not great: 26th in the nation and scoring 19.4 percent of the time.

“It comes down to compete,” Mitchell Chaffee said of what the Minutemen must do better heading into the weekend. “Our special teams needs to be better, our power play needs to be better. We just need to kind of focus on the little details.”

Speaking of compete, one thing that Carvel mentioned after the 2-1 loss to Quinnipiac last Saturday night was his team’s lack of desperation.

It’s something that the Minutemen are working on heading into this weekend.

If you plan on attending a UMass hockey game, you can expect a few things.

There won’t be a lot of goals scored in the first period, as UMass is outscoring the opponent 7-6 in the first period. So, if traffic is bad or a snowstorm delays your arrival to the arena, don’t worry – you probably didn’t miss much.

The scoring has ramped up a bit in the second period – UMass has outscored the other team 17-14 through the first 14 games of the season.

And then there’s the third period. Kiefiuk saying that the team’s desperation “picks up” is a massive understatement of what’s truly carried the Minutemen this season. In the final 20 minutes, UMass is outscoring the opponent 24-7.

“Our starts need to be better,” Carvel said. “I still feel this is a young team. With [Marc] Del Gaizo and [Jake] Gaudet out, we rely on a lot of younger players again and I think we’re still learning what it takes. To see kids like Chaffee, who’s an older guy, he’s playing great, and Jake McLaughlin, Jack Suter – the older guys on our team – they’ve been solid.

It’s the younger guys. We’ve got a lot of young guys again, and until they mature and figure out how hard you got to play every night, you’re going to go through these inconsistencies.”

On the topic of Jake Gaudet, Carvel said that he “looks really good on the ice” but he’s “not sure what his likeliness is to play this weekend.” Nothing new was said on Del Gaizo, but No. 2 was skating at practice.

The Minutemen play host to the Black Bears on Friday night. Puck drop is set for 7 p.m. But fans might want to be in your seats a bit early, as Cale Makar returns for a Hobey Baker banner ceremony.