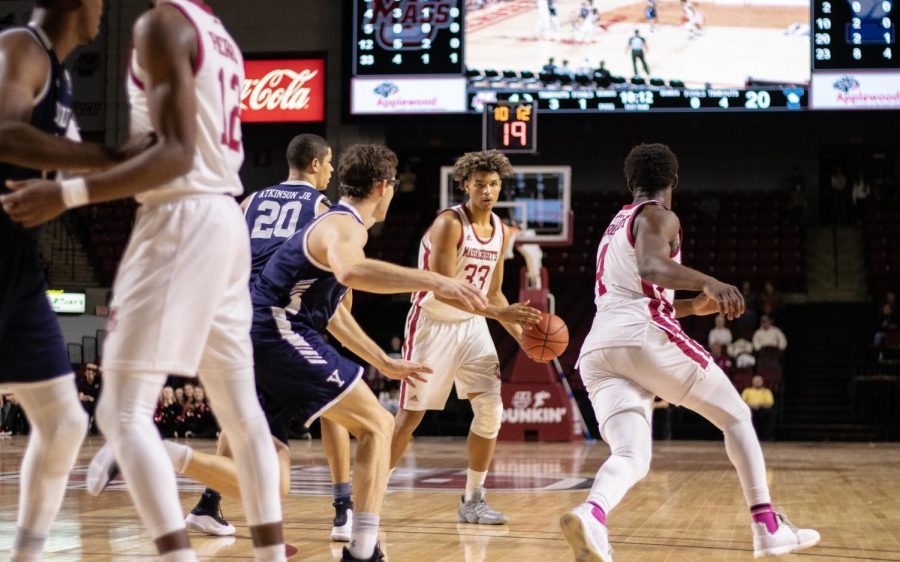 They have been short-handed and inconsistent, but they found a way to win.

In its final game before the holiday break, the Massachusetts men’s basketball team strung together an up-and-down performance to end its six-game losing streak with a 74-53 win over Maine Friday night.

“These games right before Christmas are always very tricky,” UMass coach Matt McCall said. “My first year here, we were up [25 points] at the half versus Maine. And I want to say they cut it to either six or eight. I mean they came roaring back and thank goodness the clock ran out or we probably would’ve lost that game. You just worry about your team’s focus level. They’re focused on going home. They haven’t been home since August and they know they can go home the next day.”

The first half started pretty even between the two teams. Maine (3-9) jumped out to an early lead, but UMass (6-6) bounced back from to go up 11-10 at the first media timeout with 15:31 remaining in the half. From there, UMass went on a 12-0 run that included a pair of 3-pointers from freshmen Tre Mitchell and Preston Santos. From that media timeout to the 7:09 mark, the Minutemen only allowed six points.

At that point, however, the inconsistency crept in. Bad shot selection, dumb turnovers and a lack of significant pressure from the Minutemen allowed the Black Bears to get back into the game and cut the lead to nine points at halftime.

Mitchell had 16 points in the first half and UMass was 6-of-14 from three but turned the ball over seven times. In those final seven minutes, the Minutemen only managed to score six points.

“I wrote down on my play card, and I need to continue to do this, when we get a 10-point lead, I need to burn a timeout,” McCall said. “When we have some momentum and some flow going in the game, to settle them down and get them refocused – shift their focus back to, ‘All right, back to this possession’. Because all of a sudden, you get the lead to 10 and then it’s, they score, quick layup, come down, turnover, quick layup – back to six. We have to avoid those types of situations. Happened against South Carolina, happened against Yale, happened against St. John’s.”

UMass came out firing on all cylinders in the second half, going on an 13-4 run to extend the lead to 50-32. The defense looked overbearing at times, suffocating ballhanders and preventing Maine from getting clean looks. UMass looked significantly more athletic all night, and it was the beginning stretch of the second half where it really started to show.

With the highs, however, came the lows. Whenever the Minutemen rose to a big lead, they always allowed the Black Bears to grind it back down. Maine was able to cut the lead to 11 and the two teams hovered around that range for a few minutes.

With around seven minutes remaining, Mitchell converted on an and-one when the lead sat at 10 points, and this was when the Minutemen put the nail in the coffin. UMass rattled off a 14-6 run the rest of the way, highlighted by three Carl Pierre 3-pointers.

While the inconsistency was concerning against weaker competition, the Minutemen were without both Samba Diallo and Pierre for small stretches of the game due to injury scares and entirely without Sy Chatman, who entered the transfer portal yesterday. Despite only having an eight-man rotation that featured four freshmen, the Minutemen were able to snap their losing streak and enter the holiday break on a high note.

Speaking of freshmen, CJ Jackson played 24 minutes against Maine. The Atlanta native finished with 10 points and three steals, contributing heavily to the defensive side of the ball, not previously his strong suit. This was the first run of extended minutes for Jackson, whose number was called following a good week of practice and significant depth issues on the perimeter.

“It felt really good to play out there with my brothers,” Jackson said. “We’ve been working so hard in practice and it just feels good to have it come together for me.”

UMass is off for 10 days before going on the road to face Akron on Dec. 30.