Offense looking to bounce back after weak showing against Harvard 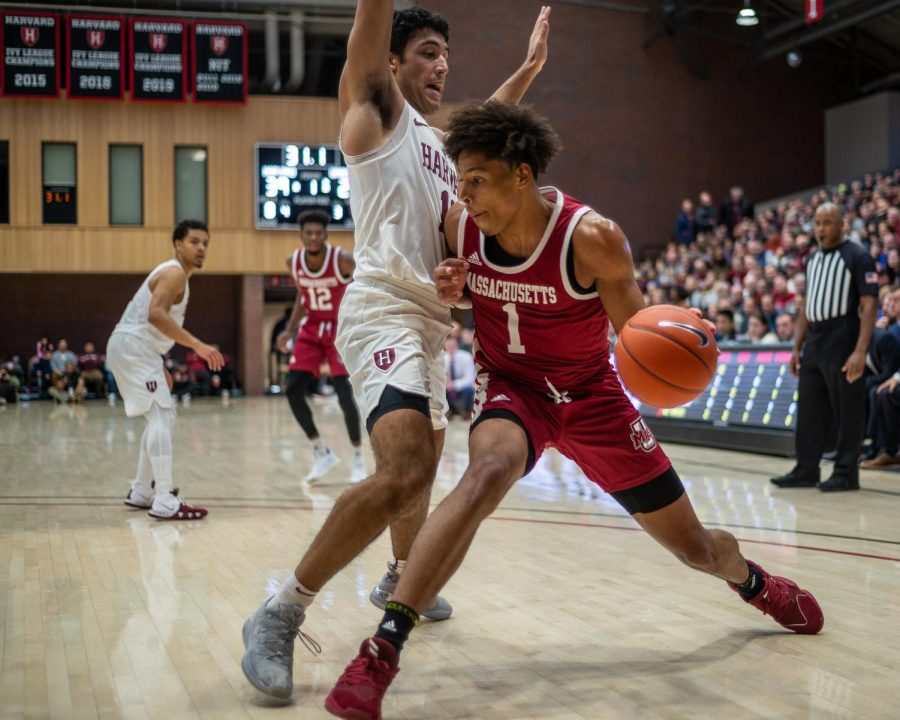 Not often do you get the chance to turn the page or press the reset button on the season. For the Massachusetts men’s basketball team, they don’t get to necessarily reset their start to the season, but at an even .500 on the season, the Minutemen (5-5) can end their five-game losing streak and get back into the win column against Yale on Wednesday night.

UMass will not have it easy against Yale (8-3), who are winners of five straight. The Bulldogs have fared well in their most recent games and are riding a winning streak that includes a win against Vermont, who was heavily favored in the preseason to win their division. Before those wins, the Bulldogs lost a close contest against Oklahoma State and narrowly lost to Penn State by just two points.

“They don’t beat themselves,” UMass coach Matt McCall said. “They’re steady, they come down and they execute. They know exactly where shots should be coming from within their offense, and they generate those level of shots. Their numbers defensively are through the roofs because they are so fundamentally sound and solid and it’s going to be a battle for forty minutes.”

It’s going to be a difficult matchup for the Minutemen, especially for a team that has been struggling shooting the ball as of late. After shooting an abysmal 15.8 percent from three-point range at Harvard, the Minutemen will look to bounce back offensively and try to find their groove. Finding a groove offensively for UMass has been tough as of late, and aside from the hard competition of teams such as Virginia, St. John’s and Rutgers, they have seemed lost on the court at times. Spacing will be key for UMass in hopes of trying to find the likes of TJ Weeks and Carl Pierre, who both struggled against Harvard in Saturday’s loss.

The three ball has been key for the Minutemen in both cases of scoring and also creating energy on the court. Weeks is currently ranked 15th in the country for three-point percentage and ranks third amongst freshmen, while Pierre is shooting just 32.8 percent. Weeks has had the ability to electrify the Minutemen’s offense with a flurry of three-pointers either late in the second half or has been able to knock down consecutive threes to spark the start of a scoring run.

“Do I think Carl and TJ are going to have nights where they struggled shooting the ball? Yes,” McCall said. “Do I think it’s going to every night? No. Those guys are too good of shooters. I think we need to find more ways of getting Keon [Clergeot] more shots. Keon is shooting a high percentage from the three-point line, we need to find ways to get him more involved shooting the basketball from behind the three-point line.”

Running the offense for majority of the games has been freshman Sean East, who started off the season hot with five straight games scoring in double digits. After scoring a combined four points against Virginia and St. John’s, the freshman point guard picked things up from how he started in the beginning of the season with a 16-point performance in the loss against South Carolina. On Saturday, East couldn’t facilitate anything for the offense and struggled against Harvard’s defense. It was a stark difference from his performances against Northeastern and Fairfield, where the freshman combined for 31 points in both wins. Some of that can be attributed to the quick turnaround that UMass has had between these games and the freshmen still adjusting to it.

“You just have to get on with the next one, it’s a quick turnaround,” East said. “We lost to South Carolina, but we got Harvard Saturday. Friday you’re on the road so it’s really one day to prepare. You really can’t think on back when you were in high school or something where you have a whole week to prepare for the next one.”

Tip-off is set for 7 p.m. at the Mullins Center.