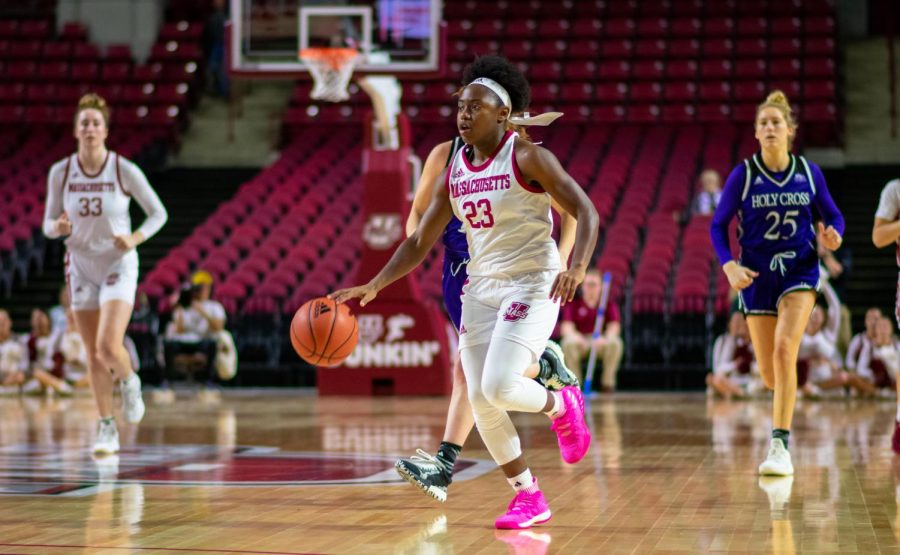 After squeaking by in their last two games, the Massachusetts women’s basketball team will look to power through Boston University Wednesday and keep their win streak alive.

The Minutewomen (6-3) will look to keep their momentum going against a small and struggling BU (3-4) lineup that has suffered three straight losses. UMass is coming off of two straight exhilarating last-second wins and are currently on a three-game winning streak.

“I feel really confident,” Bre Hampton-Bey said. “I feel like the chemistry within the team has gotten a lot better since the game with UNH. We really showed in the Holy Cross game – they’re a really good team with a lot of energy – and even though we were down at first, we really didn’t give up. We were just excited, and it was a great feeling being out there with the team.”

Although UMass has struggled with their three-point shooting this year – only Hailey Leidel and Hampton-Bey are shooting above 40 percent for a Minutewomen team that shoots 33.7 percent overall – this should not be a problem against a BU team that has no players over six-feet three-inches. Maeve Donnelly, fresh off a nontraditional double-double with 12 rebounds and 10 blocks in addition to seven points and two assists, could be poised for another big game as none of the Terriers’ four tallest players have seen much playing time. If Donnelly plays well and Destiney Philoxy continues to attack the basket as well as she has this year, this game should not be very difficult for the Minutewomen.

One thing UMass will look to improve upon against BU is preserving big leads. Against both New Hampshire and Holy Cross, UMass saw double-digit leads shrink to single possession leads within the last minute of the game. Although UMass came away with the victory on both occasions, the Minutewomen have not always had such great luck, blowing a second half lead to St. John’s on Nov. 25. Against BU, UMass will look to avoid a collapse against a team that is not particularly strong offensively.

“One of our problems is with having a good third quarter,” said Hampton-Bey. “We just showed that we didn’t give up and we’re really resilient. I think that we’ll carry that on to the next game and we’re just going to keep that throughout the season.”

The BU game will present a huge opportunity for the high-performing UMass defense. On the season, the Minutewomen have allowed only 63 points per game – a full 11 points below their own scoring average – with games of only 42, 48 and 49 points allowed already. Boston University, meanwhile, is averaging 63.4 points per game with a season low of 39 against Harvard. With Donnelly coming off a franchise record 10-block performance and Philoxy averaging two steals per game, BU’s offense might simply be overmatched by the Minutewomen, whose opponents have shot a dismal 37 percent against them.

There are many goals for UMass in this game, but the most important one is to keep winning. At 6-3, UMass has one of the best winning percentages in the Atlantic 10. Their win over Holy Cross, one of the best three-point shooting teams in the entire country, showed that UMass is hungry to exceed previous finishes under coach Tony Verdi and continue their upward season-to-season growth.