Juliana Dolan after loss to Walpole Express: “We realized we have to take these games more seriously.” 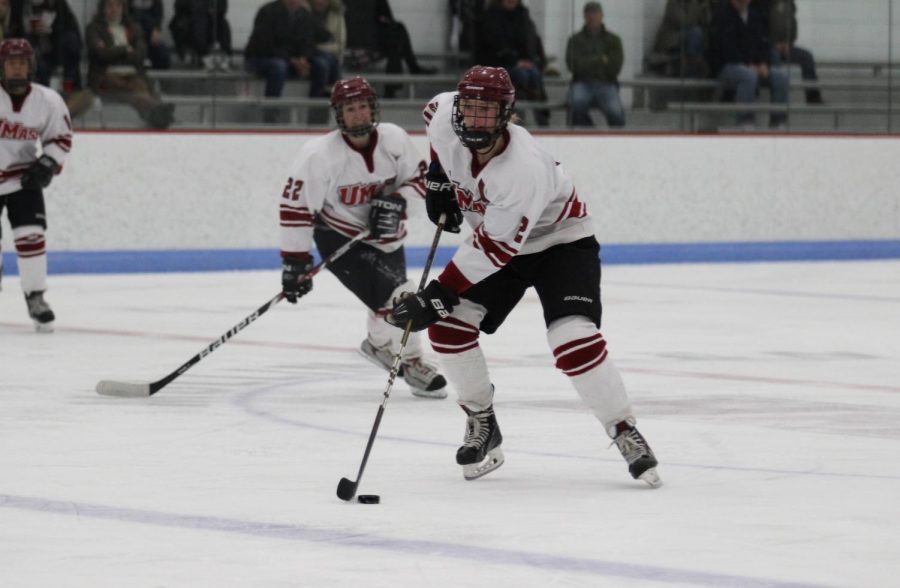 Now that the Thanksgiving break is over, the Massachusetts women’s club hockey team looks toward a rivalry game on the road against Rhode Island.

The Minutewomen (5-4) split their games three weeks ago, as they lost an exhibition game against Walpole Express Nov. 15 but bounced back when they played Boston University on Nov. 16. Even though the Walpole game didn’t count, coach Bill Wright said the team took a lot out of it and the win against BU provided something to build off.

“I think the girls came into the game against Walpole taking them a little bit too lightly and weren’t mentally prepared to play,” Wright said. “Part of that is on me as coach not preparing them properly, but at the end of the day, they did bounce back and played a much better game against BU.”

The Minutewomen and the Rams (5-6) have a longtime, heated rivalry, and UMass is looking to build off a 5-0 win in the beginning of the year. Senior forward and captain Juliana Dolan said that both teams play each other tough, neither wanting to give in.

“I think we need to emphasize that even though we beat them 5-0 the first time, it doesn’t mean anything,” Dolan said. “They’re a team that doesn’t quit and they always play their best against us, and it’s going to show if we go out in the first period not trying as hard as we can, because they’ll walk all over us.”

For starting goaltender Casey Marshall, this matchup is a chance to obtain her first victory at URI. When asked about what the rivalry meant to her personally, she chuckled.

“We played them like eight times last year,” Marshall said. “They always play hard against us. They always come out super hard and super-fast. Neither of us wants to lose, obviously.”

UMass’ defense also bounced back in the BU game, as it only allowed 17 shots on net and just two goals.

UMass currently ranks No. 5 in the 25-team American Collegiate Hockey Association, while Rhode Island ranks 13th. Wright said that the second half of the season is going to say a lot, with the first seven games of the second half on the road.

“This team is a very young team, but it’s a team with a lot of talent and potential,” Wright said.

Marshall said it’s nice to be ranked this high, but the Minutewomen should use it as something to build off of for the remainder of the season.

“It feels good, but it doesn’t really mean much now,” Marshall said. “We want to keep building off that and use that to our advantage to keep us in the top eight for the rest of the season to go to nationals.”