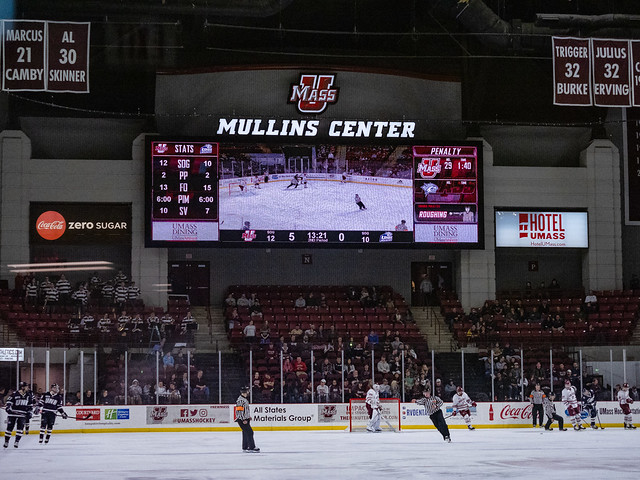 The Massachusetts women’s club hockey team picked up two road wins against the University of Rhode Island, winning 7-0 on Friday and 7-3 on Saturday.

“It was probably one of our best start to finish efforts we’ve had all season,” Coach Bill Wright said. “We got contributions from all four lines.”

The Saturday game saw the same kind of offensive production, as the Minutewomen had five different scorers. Holly Russell and Kasandra Bienkowski both finished with two goals each, and Katerina Nikolopoulos finished with five points, four of them assists.

“She [Nikolopoulos] is a very heads-up player, she finds her teammates,” Wright said. “The teammates now are starting to understand when she has the puck to get open and be ready to score because she will find them.”

Starting goaltender Casey Marshall spoke last week about how she never won on the road against URI, but she picked up two quick wins this time. Marshall shut out the Rams in the first game, making 20 saves. Marshall faced 35 shots on net and saved 32 in another win. She was a wall in goal, saving 52 of the 55 shots she faced over the weekend

“She’s been getting out of her net with confidence and playing the puck more, and it helps our defense” Wright said. “We don’t have to spend as much time retrieving the puck in our zone.”

The second matchup seemed like it would be much of the same, as UMass jumped on a 2-0 lead before the end of the first period. Nikolopoulos assisted on both goals scored, one to Katherine Paradis and the other to Bienkowski.

The Rams responded as they scored two goals in the second period and only let up one by Bienkowksi, her second shot of the night.

“Even in the first period we kept them at bay,” Wright said. “URI is a team that plays very emotional and if you allow them positive emotions flowing, they will come at you hard.”

UMass shut the door on a URI comeback when they scored four goals in the third period to finish off the Rams, 7-3. Wright and many of his players mentioned the rivalry between these two teams last week during practice, knowing that neither of these teams wanted to give in.

The roster consists of five upperclassmen: four juniors and one senior, while the rest of the team is made up of freshmen and sophomores, who were critical for the Minutewomen in the matchups.

“It’s good for the [freshmen and sophomores] to be an integral part of the success of the team now at a young age,” Wright said. “It’s a really good weekend for us to grow off of and to build off of for the second semester.”

The Minutewomen have almost a month off before their seven straight road games Jan. 9 against the University of Michigan.