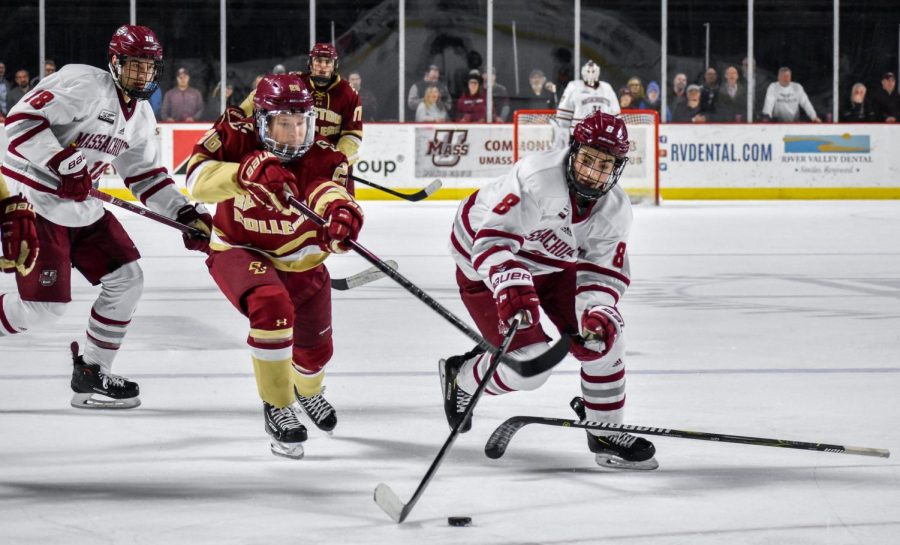 After stealing the first half of the weekend series on the road Friday night, the Massachusetts hockey team could not stop the potent attack of No. 4 Boston College and fell on home ice, 6-3.

Facing an angry opponent looking to avenge their previous night’s loss, the Minutemen (14-7-1, 7-4-1 Hockey East) got out to the start they were looking for but were unable to maintain it.

After Mitchell Chaffee scored his 13th goal of the season midway through the first period to catapult No. 10 UMass into an early 1-0 advantage, the Eagles (13-5-0, 7-3-0 HEA) came right back and tied it two minutes later, erasing the only lead the Minutemen built all night at the Mullins Center.

Once tied up, BC used three power-play goals to jump ahead and stave off a late comeback attempt.

Following his 41-save, shutdown performance in Friday night’s win, Filip Lindberg was pulled out of the net in favor of Matt Murray early on in the second period after allowing the Eagles’ third goal.

Even after giving up six goals, Greg Carvel was pleased with his team’s effort in the back half.

“Strange weekend of hockey where I think last night we stole a victory and tonight if it wasn’t for their power play I think we were the better team,” Carvel said. “I thought five-on-five our guys played really well but BC really took advantage of everything we gave them. Their power play was outstanding, basically four-for-five, and the few turnovers we made in the offensive zone they had some rushes up the ice for some nice goals, but I actually didn’t mind our game tonight.”

After Chaffee got things going in an energetic first 10 minutes — the Minutemen outshot BC 19-9 in the opening frame — Colin Felix was sent to the box, leading to David Cotton’s game-tying tally.

The goal was much more than an equalizer, as it marked the turning point and lifted the Eagles.

Three minutes later, Mike Hardman broke the tie on a backdoor feed from Alex Newhook, and just two minutes into the second period, Marshall Warren doubled the lead when he made it 3-1.

BC kept its foot on the gas in the second period and just four minutes later, the potent power play was back at it. This time, Ben Finkelstein buried a feed from Julius Mattila to extend the lead. 4-1 Eagles.

“They had a lot of motion and then they got guys coming backdoor,” Jake McLaughlin said. “So, it gets confusing a little bit – to know who exactly you have. I think they got a lucky bounce or two but they’re extremely skilled, they make plays all over the ice, so it makes it tough on us for sure.”

Marc Del Gaizo got one back for the Minutemen, jamming home a Bobby Trivigno pass on the back post, but BC erased the UMass progress just a few minutes later when Matt Boldy found the net.

John Leonard brought the deficit to two in the first minute of the third, but it wasn’t enough, as Logan Hutsko returned the favor to ice the score at 6-3.

“I really liked the way we were playing; we just needed to make it tougher on their goaltender,” Carvel said. “I think as the game went on we started having more poise with the puck and creating, but they finished. We didn’t finish. They were really able to finish on offense and those first 10 minutes we probably could have been up by a little bit, and that’s an opportunity lost.”

At the conclusion of the top-10 series, UMass walks away with two points. It may not have been the result it wanted when it began on Friday in Chestnut Hill, but it will help them down the line.

“Playing the last four games against Denver and BC I think it’ll really help us going forward,” Carvel said. “Things got exposed, special teams primarily. We got to make some strides on our special teams because right now they’re really affecting outcomes for us.”

The teams will go back at it for their third and final meeting of the regular season in three weeks.

“We need to learn from it,” Chaffee said of what UMass can take from the weekend split. “We play them in a couple of weeks, so we know what to expect and especially after these weekends, playing the top teams in the country, we know how we need to play to be one of those teams.”

“I think we also know that we can hang with the best of them,” McLaughlin added, “so I think it was a good learning lesson for our group heading forward. Are we happy with the split? No, but if you were to take one thing away from it it’s definitely a learning lesson. We’re a good team, they’re a good team, so we’ll see them in a couple of weeks.”