Filip Lindberg, last-minute defensive stand will UMass past BC on Friday

The Espoo, Finland native made 41 stops in the top-10 victory 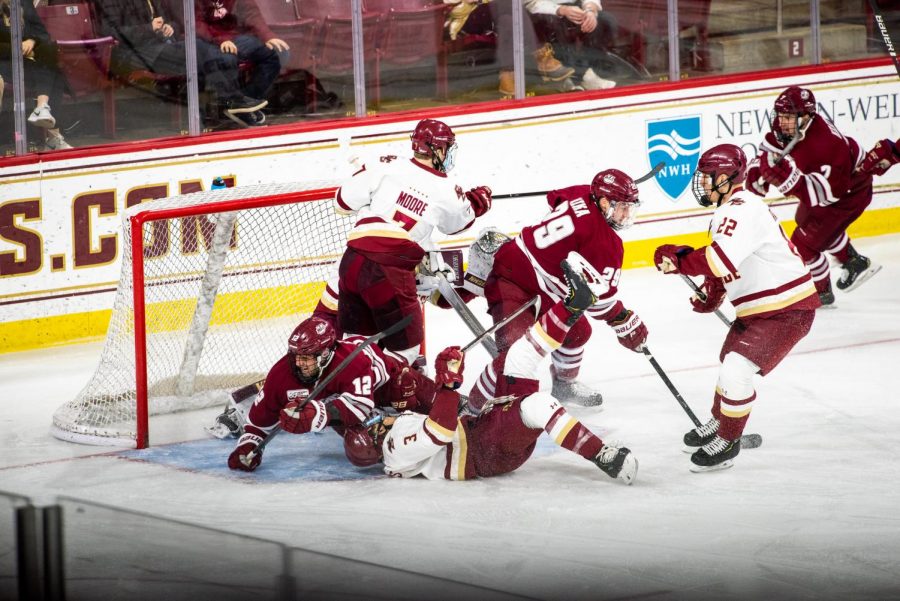 CHESTNUT HILL – 1:51 remains on the third-period clock at Conte Forum, as the Massachusetts hockey team steps out for a defensive zone draw.

Holding onto a newfound 2-1 advantage, coach Greg Carvel had just called a timeout to give the Minutemen (14-6-1, 7-3-1 Hockey East) a breather before their biggest defensive test of the season.

The Eagles (12-5-0, 6-3-0 HEA) respond to the timeout by pulling their goalie, Spencer Knight, to gain the extra attacker for a final offensive push.

As the group of No. 10 UMass skaters take the ice in front of their red-hot netminder, Filip Lindberg, they look across the sheet to see four NHL draft picks on the other side, as No. 4 Boston College sends out its most dangerous offensive unit, hungry to secure the equalizer in its home barn.

Looking to extend their 10-game win streak, the Eagles attack with ferocity, doing all they can to even it up, throwing shot after shot after shot towards Lindberg in net, hoping to get a bounce.

But just as they did all night, anchored by Lindberg between the pipes, the Minutemen (14-6-1, 7-3-1 HEA) stood tall, keeping the lethal Eagles at bay to secure the win against a scorching conference foe.

After Lindberg turned away Matt Boldy’s late bid, John Leonard corralled the loose puck, took it 150 feet the other way and threw it into the empty net.

“You always seem to be calling timeouts mostly after an icing,” Carvel said after the win. “You’re just trying to get fresh bodies. They pulled their goalie off of that, which I wasn’t expecting, but I probably would have done the same. You’re just trying to get the right bodies, your better defensive guys, guys like Leonard who, if they get the puck on their stick, are probably going to end the game.”

Entering the first half of the home-and-home series, BC scored 50 goals in its last 10 games.

“It was awesome,” said Jake Gaudet, whose first goal of the season two minutes earlier put the Minutemen ahead, leading to the defensive stand. “That’s an extremely potent offensive team, a bunch of draft picks, a bunch of high skill players, so for us to beat them – that’s how we need to play. That’s huge for us moving forward, just building confidence from a defensive perspective.”

The stout defensive effort started and ended with Lindberg in net, making key saves time and time again. The Minutemen blocked 10 shots in front of him, but he probably would’ve had those ones too.

“Unbelievable,” Gaudet said of Lindberg’s individual performance. “He played out of his mind, stood on his head. We wouldn’t even have had a chance to win if he didn’t make a lot of those saves.”

“We’ve had him steal some games, maybe not as big a game as this,” Carvel said, “especially when the opposition goalie has the numbers he has. To win the goaltending battle tonight, we probably needed that to happen to win and that’s what happened.”

Even while holding the Eagles to just one goal in front of their home crowd, Carvel thought the back end could have been even stronger, saying he thought it was “a little too loose” at times.

“The goal they scored, we had three guys around the goal-scorer, and nobody hits him, and then they score,” he said. “So, we have to be a physical team, we have to make it hard for them to get to our net. Luckily for us, when they did Filip Lindberg – that’s as good a goalie performance that I think maybe I’ve seen since I’ve been at UMass. He was outstanding tonight. He made five-six huge, huge saves. We can be better defensively; we can be harder. At times when we weren’t tonight, BC made things happen and we knew that coming in.

“We have to be better tomorrow.”

Entering the season in the wake of Cale Makar and Mario Ferraro foregoing their final two college seasons to start professional careers, there was a lot of speculation surrounding UMass and how it would respond to losing its two defensive stars.

Tonight, after Denver last week, the Minutemen showed they can still hang with the best of them.

“This year, everybody wanted to see what we are without Cale Makar,” Carvel said. “This is what we are: we’re a good hockey team. We’re a legitimate hockey team. I think that was what we needed to prove to ourselves and tonight was finally that proof that we needed that we won. 14 games now. I can’t stress it enough and I’ll stress it for the next 24 hours to our guys: we have to follow it up.”