Frustration builds in UMass’ 3-0 home loss to BC 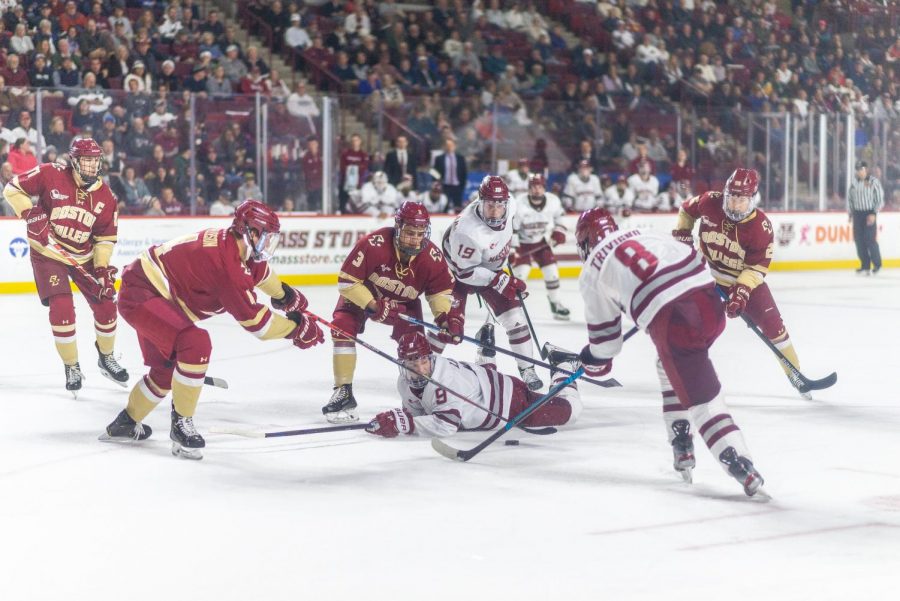 With less than three minutes left in the Massachusetts hockey team’s 3-0 loss to Boston College, John Leonard entered the zone with speed, hoping to salvage a goal from an otherwise disappointing game.

But just as they had done for much of the night, the Eagles (16-7, 10-5 Hockey East) stifled the Minuteman (16-9-2, 9-6-2 HEA) scoring chance by stripping Leonard of the puck. Leonard, upset with the BC defender, hit him into the wall, earning himself a trip to the box with a roughing penalty.

It was only a matter of time that frustrations came to a head with the way the night had gone.

“Leonard takes a selfish penalty at the end,” coach Greg Carvel said. “I think that’s a sign of frustration and it’s a sign that our mindset has drifted too far.”

The play was emblematic of UMass’ mindset for much of the third period.

After a goalless first 20 minutes, the Eagles scored three second-period lamplighters to take a commanding lead into the third. Despite outshooting BC 19-16 through the first two periods, the Minutemen found themselves in a three-goal hole.

Less than three minutes prior to the Leonard roughing call, UMass was whistled for a too many men on the ice penalty. The penalty sunk what had been a momentum-building stretch of play in the middle parts of the third.

In the final frame, UMass peppered Eagle’s goaltender Spencer Knight with 11 more shots but was still unable to breakthrough. As more and more shots were stopped by the BC netminder, the Minutemen’s frustration appeared boiled over with Leonard’s late whistle signaling the breaking point.

With the power play unable to score again, the Minutemen are now 0 for their last 17 with a man advantage. The power play struggles come in the midst of a three-game stretch in which UMass has scored just one goal.

It wasn’t as if the Minutemen weren’t generating chances. Even the much-maligned power play looked dangerous for stretches and earned the approval of Carvel despite their scoreless night.

The main source of UMass’ frustration proved to be Spencer Knight, who stopped all 30 of the shots he faced. In the second period, Minuteman defenseman Zac Jones dangled his way to the front of the net and backhanded a shot with just Knight to beat. Knight stole the puck with his glove to keep his shutout intact.

As the Minutemen searched for an elusive goal, Carvel tried line combination after line combination, hoping to find a trio that could put one past Knight. He even put John Leonard and Mitchell Chaffee on a line together as they hoped for their first goal.

“We changed all the lines up, those two guys [Chaffee and Leonard] have never really played together and they’re our two leading goal scorers and we need to find a way to score a goal,” Carvel said. “Put those two together with the one guy who has scored a goal in the last three games and give them an opportunity and obviously it didn’t work well enough.”

With games against No. 9 Providence and No. 14 UMass Lowell on the horizon, UMass will need to put the frustration of the night’s game behind them.