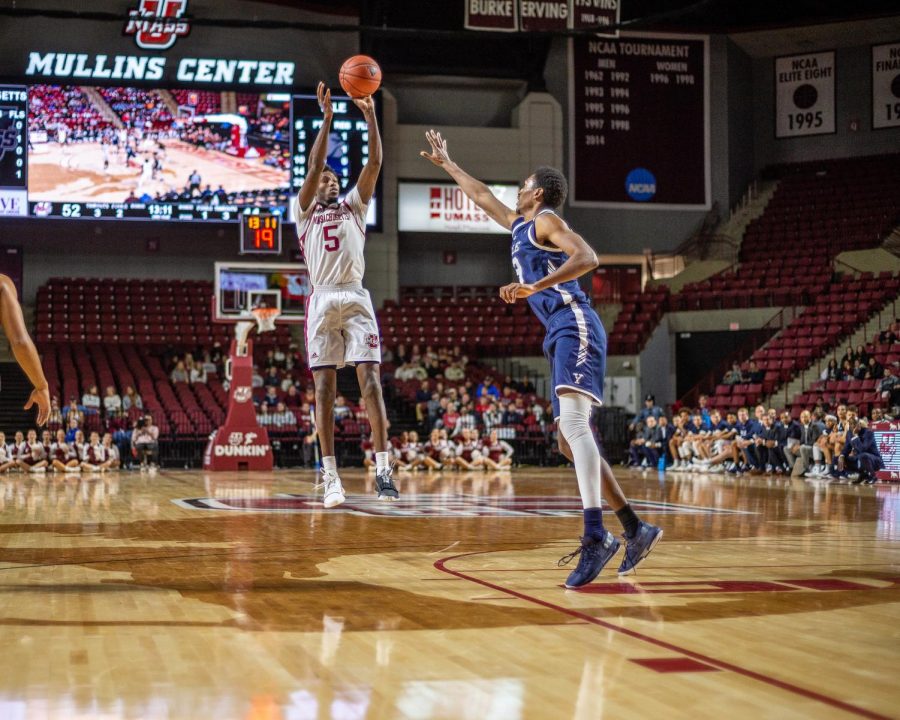 The Massachusetts men’s basketball team followed its overtime loss to Saint Louis with a solid late-game performance to pull out a 77-69 win against La Salle.

The Minutemen (7-8, 1-1 Atlantic 10) were able to win the game on the back of their effort on both ends of the floor. Although it came and went, UMass was able to put together timely scoring runs and held the defense together when it needed to.

“We just talked a lot about being the tougher team and loose balls and hustle plays – those types of things,” UMass coach Matt McCall said. “I was really proud of our guys. I thought we responded the right way in the game when things didn’t go so well, especially in the second half.”

UMass got off to a slow start and tried to force the ball down to the post so that freshman Tre Mitchell could get going early. The idea was there, but the energy wasn’t. Mitchell had a couple of decent looks, but the movement on offense in the half-court and the effort on defense resulted in several empty possessions.

The beginning portion of the game set a trend that kept UMass from falling behind. Whenever UMass would get in a rut, La Salle (10-5, 1-2 A-10) would bail them out by wasting possessions. The empty possessions piled up for the Explorers, and instead of putting UMass away early, they allowed them to crawl back gain a lead.

The second trend appeared with 10:21 remaining in the first half, as Carl Pierre connected on a 3-pointer to give UMass a 19-17 lead. Pierre was instrumental in pushing UMass over the top, as his presence drew in defenders and opened the floor for others to take over. That led to the third trend: Samba Diallo.

Just after Pierre gave UMass the lead, Diallo found Keon Clergeot for an and-one layup. A few possessions later, Diallo found Mitchell for the lay-in. Diallo finished the game with six assists and his ability to find opportunities for shooters and cutters was big for UMass throughout the game.

La Salle managed to keep the game close, often getting out to one-possession leads, but the first half was highlighted by Pierre. The captain scored the final 11 points of the half for the Minutemen and capped it off with a 3-pointer at the buzzer that gave him over 1000 points in his UMass career. Pierre finished the half with 16 points on a perfect six-of-six from field and four-of-four from three, as the Minutemen held a 41-35 lead.

“To be honest, I was completely unaware of where I was at,” Pierre said. “It really came as a surprise at halftime, my teammates came over to high-five me and all that and pointing at the screen and I looked over and that’s when I realized.”

In the second half, the UMass lead was cut to one point within 30 seconds. From there, though, the defense came alive, and in a four-minute stretch, the Minutemen held La Salle to just one point. In that period, Mitchell hit a pair of layups, Samba Diallo laid it in and was fouled and Carl Pierre hit his fifth 3-pointer of the game.

The final trend started becoming prevalent late in the game. Whenever UMass built an extensive lead, the energy levels dropped and the Explorers came right back. An 11-point lead was cut to four before a timeout by McCall slowed things. A couple of energy plays from Preston Santos extended it, but struggles with contesting shooters brought it down again.

That trend continued until the very end of the game, when La Salle was forced to foul UMass to stop time and the Minutemen connected on their free throws. When the final buzzer sounded, UMass won the game 77-69.

Diallo, specifically, was a major presence for the Minutemen in the second half. His performance on the glass resulted in 12 rebounds. He also finished the game with 12 points and three steals. He filled up the stat sheet and looked completely comfortable on both ends.

“[I’m] very comfortable,” Diallo said. “[I] play free. I don’t have to think about anything. That plays a big role in it.”

Following the loss to Saint Louis and some of the close defeats from earlier this season, it was easy to envision UMass blowing the lead and the game. Instead, the Minutemen learned from their previous situations and worked on improving their late-game play. They reaped the benefits against La Salle.

“At the end of each game that we let slip away at the end, we come in, watch film, try to emphasize what our mistakes were,” Pierre said. “I think today we just did that. We finished possessions with rebounds, hit our free throws, got stops, didn’t turn it over in the end. It’s just a manifestation of the process.”

After the game, McCall confirmed that freshman guard TJ Weeks would miss the remainder of the season due to injury. He’s scheduled to have surgery on Friday that will sideline him for three to four months.