Minutemen spread the wealth in victory over Hawks

Dibaji Walker breaks out for 22 points, five players in double-digits 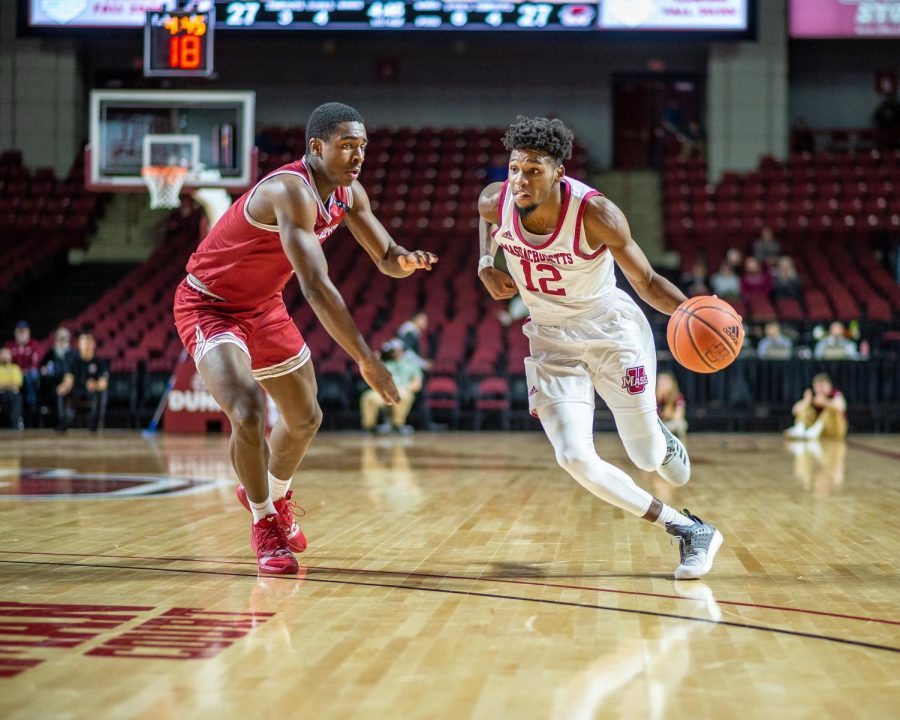 In the last couple of weeks, UMass coach Matt McCall has been talking of the need for a third and fourth scorer to contribute to the offensive numbers that Tre Mitchell and Carl Pierre put up on a consistent basis.

Wednesday night’s contest between the Massachusetts men’s basketball team and Saint Joseph’s saw McCall’s statement make its way to the court. The Minutemen finished with five players in double digits, spreading the wealth offensively in their 91-76 victory over the Hawks.

McCall was thoroughly impressed with the distribution of the ball offensively. UMass finished with 26 assists compared to the Hawks’ total of 14. Sean East, Pierre and Mitchell finished with a combined 19 assists on the night.

“Well the scoring is terrific but look at the assists. We have 26 assists, Carl has seven, Sean has seven, and Tre has five,” McCall said. “That’s terrific. That to me was the most impressive thing about our team tonight. We kept it really, really simple in the second half.”

Dibaji Walker was the leading scorer for the Minutemen, finishing his night with 22 points and no turnovers. Walker stepped up to the moment when needed be and was the extra scoring option that UMass has needed as McCall mentioned early in the week. Walker finally seemed to get into his groove offensively and didn’t miss a beat at all in the second half; he was instrumental in contributing offensively to Mitchell and Pierre in the dominant win.

“Felt really good to let loose and just do what I usually do,” Walker said. “I’ve been selling my team short with what I have been capable with in the past couple games. I’m happy about it, but I just feel like this is what I’m supposed to be doing.”

Along with Walker’s 22 points, a season high for the sophomore, Pierre finished his night with 14 points as well as seven assists. Pierre went 5-of-7 from the field, along with two 3-pointers on the night. The key for UMass throughout the week was focusing on the next task at hand, and after a big win against Duquesne on Saturday, Pierre made sure that UMass was focused for the contest against St. Joe’s.

“I think we emphasized just trying not to get too hot,” Pierre said. “It was a big win, but it was just a win. There is another game and another game after that like I said yesterday, and we just have to be prepared to come in and battle and do the necessary work that we need to put in to be ready to play the next game.”

Pierre and Walker both combined for 36 points, which was only even a third of the scoring for the Minutemen, who put up 91 points against a St. Joe’s team that has competed hard against their competition. Preston Santos had another strong performance and got the nod for the start on Wednesday after his outburst on Saturday against Duquesne; he finished with 12 points on 5-of-6 shooting from the field and eight rebounds. The freshman has developed the confidence to finish at the rim not only with his floater, but also driving hard in the lane with multiple defenders.

The man facilitating the ball for the Minutemen was often East — he only managed to finish with five points but dished out seven assists and distributed the ball efficiently when he was on the floor. East showed at times that he can still drive to the lane after a high pick-and-roll and finish with a clean floater, but what stood out the most was his ability to get production out of everyone on the court.

McCall spoke to the confidence boost that a game like this has for East.

“Sean is good when he is smiling,” McCall said. “There is ups and downs as freshman. Everybody goes through it whether you are an athlete or even a normal student at times, but especially a student-athlete you go through different things when you are a freshman and he is better when he is smiling. I knew he was going to play well because of that.”