First road win over Duquesne since 2000 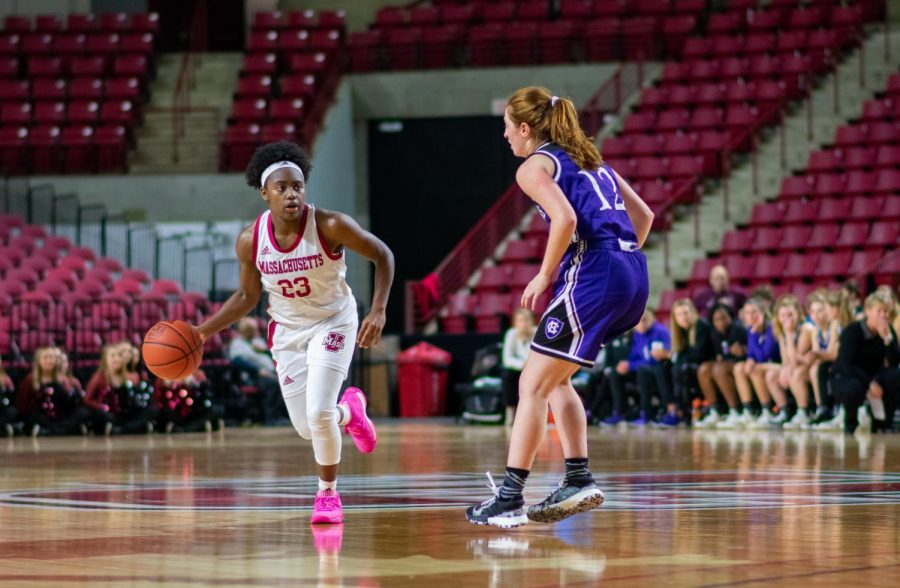 The Massachusetts women’s basketball team held off a furious comeback by Duquesne on Saturday night, securing an 81-77 win to open its Atlantic 10 schedule.

Clinging to a narrow lead, the Minutewomen cleaned up the ballhandling and got the offense going again, doing just enough to stave off the Dukes down the stretch.

“We gave them momentum,” UMass coach Tory Verdi said. “They made a couple key shots, we turned the ball over and they kept going.”

As the lead continued to shrink late in the fourth quarter, the Minutewomen survived a nearly four-minute scoring drought thanks in large part to missed opportunities from Duquesne. The Dukes missed two layups and a transition jumper in the final five minutes as their hot shooting – 48.2 percent on the game – slipped a little in crunch time.

But the Minutewomen also stepped up the physicality on defense in an already physical game, eliminating the offensive rebounds that Duquesne had relied on early in the quarter and harassing the Dukes into making mistakes.

“They were putting some physicality on us, but again, then we responded,” Verdi said. “Tonight showed our toughness against a really good team.”

With Duquesne breathing down their necks, it was senior Vashnie Perry who stepped up for the Minutewomen, making two key jumpers in the final two minutes and scoring UMass’ last six points. When the Dukes cut the lead to three in the final seconds, it was Perry who got the ball.

“We were inbounding with 2.5 seconds left and she was the one getting the pass, she had to make the catch, and she did,” Verdi said. “Got fouled and iced the game from the free throw line. But that’s what seniors do, they make key shots, and that’s what she did tonight.”

While Perry made the shots in crunch time, junior Sam Breen powered the Minutewomen for most of the night. Playing in just her third game for UMass after transferring from Penn State, Breen was unstoppable down low in the first half, scoring 13 points and pulling down six rebounds.

Duquesne managed to slow her down in the second half, but the extra attention benefited the rest of the Minutewomen as they opened up the lead.

“She’s probably one of the best low-post players in the A-10,” Verdi said. “Duquesne had to start doubling her, and we like that because somebody else is going to be open and we’ll take advantage of that. When Sam’s one-on-one, she’s very good. She can score it in bunches, and she definitely did that for us.”

It was an unusual game for UMass, with hot shooting from both teams and a combination of fast and physical play. The Minutewomen shot 50.9 percent from the field and 47.4 percent from three, but when they were pulling away in the third quarter, it was largely thanks to their ability to draw fouls. Of UMass’ 26 points in the third, 10 came on free throws.

In the end, the Minutewomen came away with their eighth straight win, beating Duquesne on the road for the first time since 2000.

“It’s big,” Verdi said. “We want to start the A-10 on the right foot, and to play on the road and get the win on the road means a lot. But again, we’re really young, but I thought our toughness was there, and it shows who we really are as a team.”

UMass will look to keep rolling Wednesday against St. Bonaventure as the road trip continues.