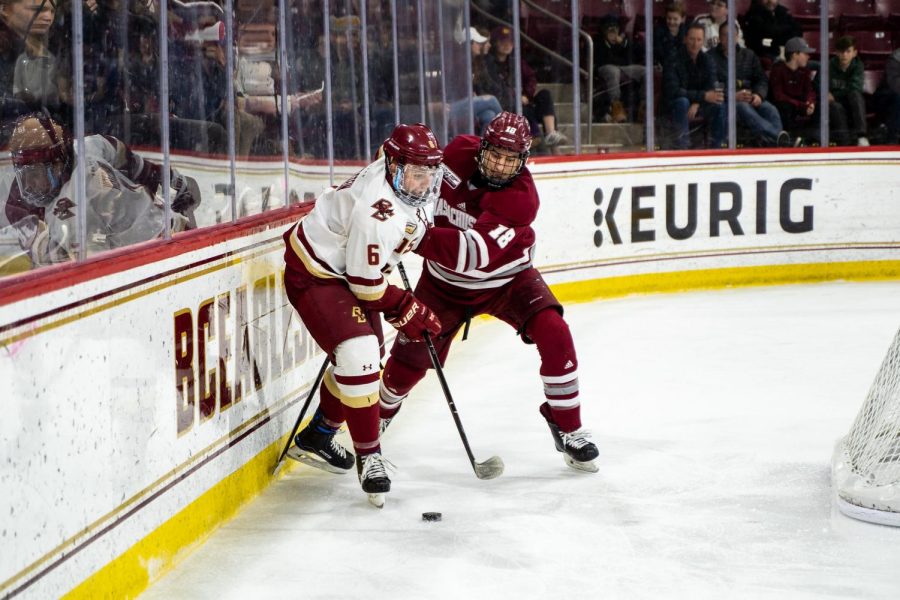 CHESTNUT HILL – Greg Carvel made the game’s most important decision just past the five-minute mark of the third period.

With the score knotted at 1-1, the Massachusetts hockey team’s head coach elected to promote Jake Gaudet, who began the game on the fourth line, to the first trio to skate between Mitchell Chaffee and Bobby Trivigno. They had one job: score the tiebreaking goal.

And that they did.

The move by Carvel to catapult Gaudet from the fourth line to between Chaffee and Trivigno was one that had been coming all game.

“We thought he was playing well,” Carvel said of Gaudet. “He started on the fourth line, so he was pretty fresh so late in the game we tried to get him some more ice because we thought he had a lot more in him.”

Things haven’t come easy for Gaudet this season. Because of injuries, and less than stellar play at times, No. 18 has often struggled to make his way into the top-six rotation. But Friday night’s win certainly marked a turning point for Gaudet.

To make it even sweeter, the game-winner was his first of the season.

“Yeah. Felt very nice,” Gaudet said of his first lamplighter. “It’s been awhile. Nice to be able to contribute.”

What Gaudet found even bigger was to be out on the ice at that point in the game.

“Yeah absolutely,” he said of the promotion inflating his morale. “Huge confidence boost. I’ve had an up and down season so far. To be able to get a goal like that and to be able to get an opportunity like that in the third period is huge.”

The scoring began 10:51 into the first period when John Leonard scored his first of two on the night.

Logan Hutsko carried the puck at the offensive blue line and threw a pass behind him to his defenseman. That pass never made it to his intended receiver, as Leonard intercepted it, took it the other way for a breakaway and backhanded it through the legs of Knight to give UMass the 1-0 lead.

“Off that faceoff, it’s my job to go out to the point there,” Leonard said of the sequence. “I think it might’ve been a winger at the time who had the puck and I just tried to bait him a little bit and fortunate enough he put it on my stick and I was able to capitalize.”

BC responded eight minutes later when Alex Newhook split Matthew Kessel and Gianfranco Cassaro, took the puck in alone on Filip Lindberg and scored to tie the game.

It was the only goal Lindberg allowed on the night, as he finished with 41 saves on 42 shots.

When BC outshot the Minutemen 15-4 in the second period and 17-12 in the third, there was Lindberg turning away the Eagles’ chances at swinging the momentum.

Filip Lindberg with an unbelievable glove save to keep things tied pic.twitter.com/MigQRKV0AW

“Huge,” Leonard said of Lindberg’s play. “He pretty much singlehandedly won that game in a few ways. He made some big saves.”

The meaning of the win was palpable to the UMass crew. When Leonard scored his empty-net goal with under a minute to play after an all-out final stand in the defensive zone, he ripped a shot as hard as he could into the gaping cage.

The win comes on the heels of two losses to No. 5 Denver last weekend. BC entered Friday having won 10 straight and sitting at No. 4 in the country. The stage was far from set for an easy UMass victory.

None of that seemed to matter when the clock struck 7 p.m. on Friday night.

“I just had that sense tonight,” Carvel said. “We felt like a more experienced team coming into this night just because of those two tight, close games against Denver. That was good timing.”

Despite the odds being stacked heavily against them, a win like this felt like a turning point for the Minutemen.

“We needed to have a big win like this on the road and I think for our own sake and moving forward,” he said. “It felt like a playoff hockey game tonight and we’re going to have a bunch coming up so really good night for us.”

The playoff intensity continues on Saturday night when BC and UMass meet again for the second match of the back-to-back. The only difference will be the location.

Puck drop is slated for 7 p.m. from the Mullins Center.