Rematch: No. 9 UMass and No. 7 Denver set to meet for the first time since national semifinal 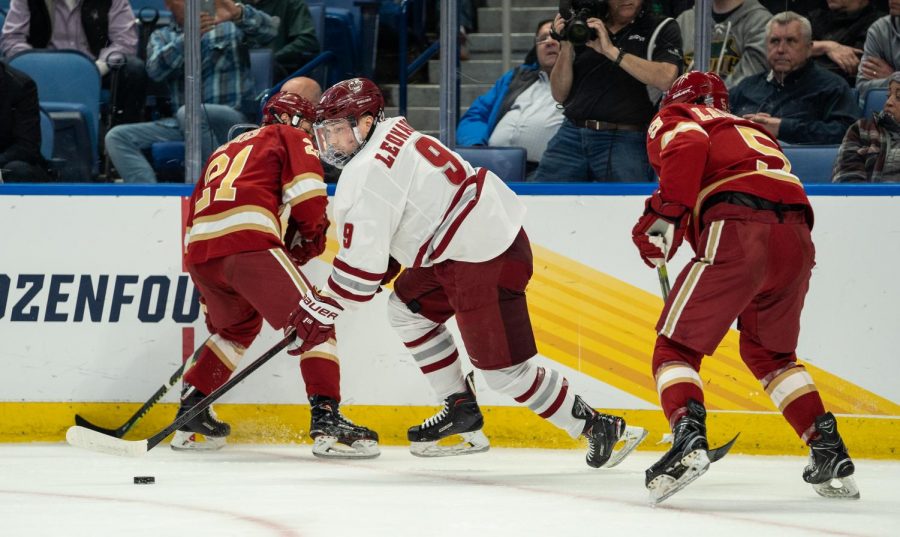 The Massachusetts hockey team faces its toughest test of the season this weekend, as it hits the road to play two enormous games against No. 7 Denver.

It’s a series that’s been circled on the calendar since it was released in June: the first rematch of the Frozen Four thriller that saw the Minutemen (13-4-1, 6-2-1 Hockey East) earn a 4-3 overtime win over the Pioneers (11-4-3, 6-2-1 National Collegiate Hockey Conference) thanks to a Marc Del Gaizo one-timer from Oliver Chau that sent them to their first-ever national title game.

Eight months later, the two are set to go head-to-head once again, this time at Magness Arena. It will be Denver’s first game of the second half, while No. 9 UMass already beat Rensselaer, 5-3 on Sunday.

“When you look at the schedule it’s obviously an outlier because of the distance,” coach Greg Carvel said, “but when you combine that with the recent history, two top-10 teams, Cale [Makar] playing out there, there’s a lot of factors that make it a unique weekend. But we’re just looking at it as a really good challenge to try to win some games on the road against a very good team.”

The taste of defeat doesn’t subside too easily, and Carvel expects memories of the Frozen Four to be at the center of what feels like a playoff showdown.

“I think both teams have something to prove after last year’s semifinal,” he added Wednesday, “so I think it’ll be a real good challenge for us, again, to see the quality of this year’s team. I’m sure Denver has something it wants to prove, so it’ll be really good hockey with two teams playing at their best.”

Despite recruiting several freshmen, both teams have continued their success from last season by following more or less the same playstyles. While the Minutemen added nine freshmen after their run to the title game came up short at the hands of Minnesota-Duluth, David Carle’s squad only brought in six new players.

“Both teams are probably pretty similar,” Carvel said. “Systems and styles of play stay pretty consistent, obviously you change pieces, but they look pretty similar to what we saw last year.

Sophomore Emilio Pettersen leads the Pioneers in the scoring department with 16 points through 18 games, while Bobby Brink and Liam Finlay are close behind, each accumulating 13 points of their own.

Brink, however, like UMass’ Zac Jones, is currently playing with Team USA at the World Junior Championship in the Czech Republic, which means the freshman will not be available for the weekend.

Both teams are averaging just over three goals per game through the first half and they have the defenses to match. DU is allowing two goals per game, while the Minutemen are allowing 1.78.

On special teams, the Pioneers are converting at just under 20 percent on the power play. Their penalty kill is one of the best in the nation, killing penalties 91 percent of the time they commit them.

For the Minutemen, Mitchell Chaffee maintains the scoring lead he’s held onto for a majority of the season with 24 points. His 12 goals are good for third in the nation. Fellow junior forwards John Leonard and Chau are just behind the captain with 16 and 15 points on the season, respectively.

The central area that UMass has struggled with throughout the year has been the power play. With two potent offenses going at it this weekend, it would be beneficial if it can get something going.

“You hope that it can be a factor in a positive way,” Carvel said. “It hasn’t really all year and we’ve won a lot of games without it being effective, but it scored for us in the third period at RPI, so that was a good sign. If we want to be an NCAA team, which is our goal, we need our power play to be better.

“[Denver] will be probably the most skilled team that we’ve played to this point and special teams is always a big factor, so that [and defensive awareness] have been the focus points this week.”

Puck drop is set for 7:07 p.m. on Friday and Saturday night at Magness Arena in Denver.