Minutemen scored 52 points in the second half 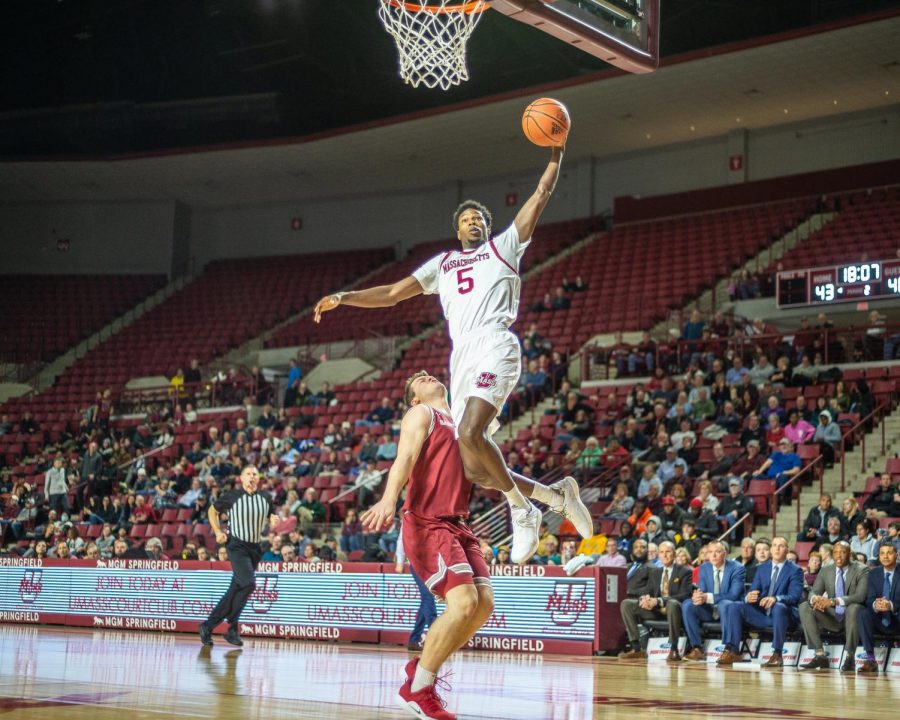 The Massachusetts men’s basketball team pieced together its best offensive performance on the season in a 91-76 win over Saint Joseph’s on Wednesday.

“I thought our effort level in the second half was through the roof,” UMass coach Matt McCall said. “I thought in the first half our effort level was okay and we were just kind of trading baskets there and the game was too much. We were allowing them to score — I think they had 22 points in the first eight minutes of the game. It just kind of went back to trading baskets and I felt like we kind of just stepped on the gas, especially defensively, in the second half.”

St. Joe’s Ryan Daly came as advertised. The redshirt junior powered the Hawks offense to 25 points in the first 10 minutes of the game, 10 of which were his — the visitors managed to extend a lead as far as 10 points, but from there, UMass just kept getting buckets.

From that 10-point deficit, the Minutemen started smothering a bit more defensively and it allowed them to get easier looks in transition. Within five minutes, that 10-point lead became a tie game. Both teams continued to trade baskets, but it was UMass that held a three-point lead heading into halftime.

“I thought we were down ten because of our effort,” McCall said. “That’s something we preach, each and every day. That’s something that we reward and I think you can see that some of the guys that are logging so many minutes bring that effort. I thought at the beginning of the game that it wasn’t where it needed to be. We were down 10, kept battling, we fought back to a three-point lead.”

The Hawks were the first to score in the second half, cutting the lead to one point. From there, UMass made 12 of its first 14 shots to turn that one-point lead into a 17-point lead just 10 minutes into the half.

A lot of the offense in the second half came just as the transition was settling. UMass was playing fast and it showed in the tempo of the scoring. UMass hovered between a lead of 15 points and 21 points for the rest of the half.

“I think it starts on the defensive end,” Carl Pierre said. “I think we were really able to stifle them and once we strung stops together, we were able to run in transition, move the ball around, get good looks, throw it into the post, hit threes and just play the fun game.”

The offense was really about ball movement and good decision-making in the second half. UMass only had two turnovers, one of which came very late in the game. The Minutemen finished with 26 total assists — 14 in that second half. The free-moving offense allowed multiple players to get the ball in the basket and five players finished in double figures, led by sophomore Dibaji Walker’s 22 points.

“We kept it simple,” McCall said. “Especially in the second half on offense, didn’t run a lot of plays, stayed with our flow game, explained to our guys exactly where the reads were coming from — worked a lot on that today in shoot around — just kept it simple.”

Daly only managed to score eight points in the second half. The focus of the defense was on him and denying the Hawks the opportunity to get clean looks from three. They got their fair share, but UMass geared the focus towards the lead ball-handler and it paid off in the end.

How did they stop him?

“Samba [Diallo],” Walker said. “I’m going to give him his props. We did it as a team though, because sometimes he did get smacked by screens and there was a point where I was on him and had to stop him too. We all did our part.”

UMass heads on the road to face Rhode Island on Tuesday at 7 p.m.