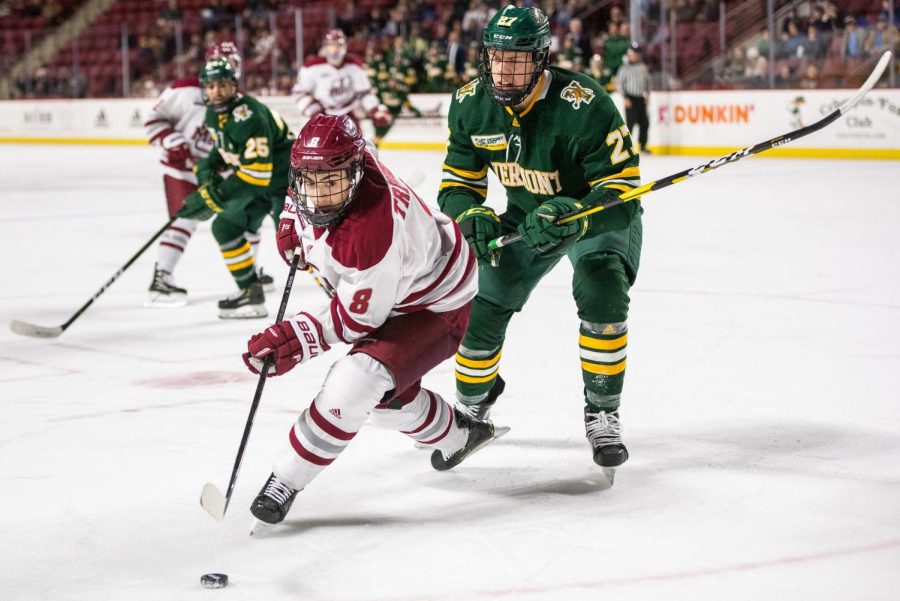 The Massachusetts hockey team may be coming off losses in three of its last four games, but you almost wouldn’t even be able to tell considering the type of atmosphere surrounding the facilities this week.

Granted, those games were against No. 4 Denver and No. 5 Boston College, a pair of premier teams.

During each of the measuring stick kind of games over the past two weekends, they showed they’re still capable of hanging around some of the best teams in the country, but they also revealed their weakest spots that ultimately led to their defeats.

The major one is the power play.

It’s a problem that’s hurt No. 10 UMass all year, which is converting at just 13.4 percent on the advantage. It’s been able to survive without it for most of the season, but it can’t stay quiet forever.

In the midst of the skid, Greg Carvel is pleased with how his team is handling the mid-season adversity.

“I think we all responded the same way,” he said after practice on Tuesday ahead of the weekend road series against Vermont. “We’re learning a lot about ourselves when we play these elite teams and it’s got us hyper-focused on where we need to be better – obviously it’s our special teams.

“Our special teams are not good. 5-on-5 I think we’re as good as anybody in the country, but once we get into special teams that’s when the games are turning against us against the better teams.”

“It’s been frustrating,” Marc Del Gaizo said. “We’re a top-10 offense in the country but our power play is 50th, so it’s a big hole in our team right now. I think if we can fix it, then the sky’s the limit.”

In the last four games, the Minutemen went 1-of-18 on the power play, while the opposition was 5-of-17. Four of those goals were big difference-makers in two of the recent top-10 losses, either bolstering the other team’s cushion, disrupting the flow of the game or swinging the momentum.

On Saturday against the Eagles, they got out to a hot start, but special teams burned them. Carvel was pleased with the 5-on-5 play afterward, but they couldn’t win with that special teams outing.

“Starting the game means you’ve come prepared to play and then it’s just a matter of keeping that consistently for the whole game,” Carvel said. “And to me, it’s special teams. People probably think we’re undisciplined – we’re not taking any more penalties than our opponent is. I think for that weekend against BC both teams had eight or nine power plays, they scored on four of them and we didn’t score on any of them. That’s the difference. It’s not a discipline thing, it’s a special teams thing.”

During Tuesday’s practice, UMass worked on the power play by slimming down the offensive zone.

“It makes them realize that the puck needs to move, not them,” Carvel said. “It’s much more effective when the puck moves. We’ve got guys that think when they get it on their stick and slow it down that’s good for us; it’s not, it’s bad for us.”

“I think we’re just trying to build some chemistry right now,” added Del Gaizo, who scored six goals on the power play last year. “We’re still jelling with the power play and working in smaller spaces is just to make quicker passing and trying to find each other quicker and not holding onto the puck.”

When it comes to the extra-attacker unit, Carvel harbors more frustration than the players, he said.

“I told them: we’ve got two of the top goal-scorers in the country. We’ve got the defenseman from the World Junior Championship team who ran the power play, we’ve got Marc Del Gaizo who scored 13 goals last year – it must be coaching,” he said.

The Minutemen will put their work to the test this weekend against senior netminder Stefanos Lekkas and the last-place Catamounts (3-13-3, 0-9-1 HEA), who are riding a three-game winless streak.

“Every point is huge,” Carvel said. “We’re near the top of the league and we’ve got to take care of business every night. Watching Vermont on video, they don’t have a lot of wins, but they play hard.

We used to be in the basement. We used to go into games knowing we could win. It doesn’t matter where you are in the standings, everybody can win, everybody can lose, so we always got to be wary.”

Puck drop for both Friday and Saturday night’s games is at 7:05 p.m. at Gutterson Fieldhouse.