UMass went 0-for-7 on the power play on Saturday 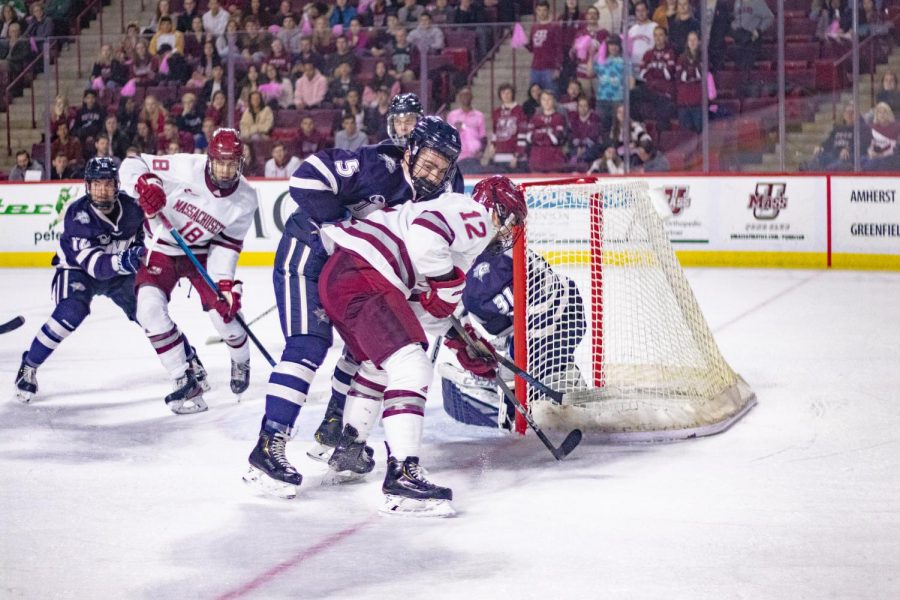 DURHAM—With the Massachusetts hockey team facing a second-straight shutout with time winding down in Saturday night’s matchup with New Hampshire, Jack Suter came through to earn the Minutemen a 1-1 tie.

“The way we train our guys, we feel like it gives us an edge in the third period,” head coach Greg Carvel said. “Especially on a Saturday night. You hope the other team is running out of gas and you’ve still got gas in the tank.”

Down 1-0 with just over five minutes to play, Jack Suter skated the puck into the offensive zone and was forced toward the right side of the ice. With no Minutemen in the zone with Suter, he wristed a shot that found the back of the net, just beating UNH (13-9-2, 7-6-1 HEA) goaltender Mike Robinson’s blocker.

“Jake McLaughlin moved it up to Bobby Trivigno, who made a nice play to me in the middle,” Suter said of the play. “And then I kind of saw the [defense] was flat-footed and decided to use my speed and then just chipped it far side of the net.”

The goal marked the senior’s third tally of the season.

“Jack Suter, that’s a tremendous effort by him,” Carvel said. “But that was a big character point for us in a league where every single point is going to be huge.”

The second period saw its fair share of penalties as each team went on the man advantage three times. All six second period power plays were unsuccessful, however.

“There were a lot of penalties tonight which could have determined the game—especially for us, but it didn’t,” Carvel said. “But, I’m really happy for my guys. They played hard and they found a way to tie on the road, late in the game.”

UMass’ power play continued to struggle, failing to score despite seven tries on the man advantage. With the 0-for-7 Saturday, the Minutemen power play unit went 0-for-12 for the weekend.

The best scoring chance came after a Jake Gaudet boarding penalty. UNH looked to have UMass goaltender Filip Lindberg beat with the Espoo, Finland-native laying on his back and the puck still loose in front of the UMass goal. The Minutemen cleared the puck away after an errant Wildcat shot hit the end boards, keeping the deficit at a single goal, a deficit that would hold heading into the third period.

Filip Lindberg stopped 18 of the 19 shots he faced on the evening, coming up big on a few occasions to keep UMass within striking distance.

“[Linberg] was great,” Carvel said. “He was great. He made three or four breakaway, 2-on-1 saves all alone. Big, big saves that kept the game at one goal there.”

After UNH beat the Minuteman defense near the nine-minute mark of the third, Lindberg stopped two shots from within the crease to keep the score at 1-0.

In a game in which UMass’ leading goal-scorer John Leonard didn’t dress, the Minutemen still snapped a scoreless streak that stretched over almost five and a half periods of hockey.

“I felt like we were determined,” Carvel said. “The kids weren’t frustrated; we were just doing the best we could to get pucks around the net and eventually found a way.”

“It’s just mindsets and desperation heading into that third period,” Suter added. “Just looking to get that equalizer.”

UMass is back in action Friday when they host No. 4 Boston College at 7 p.m.