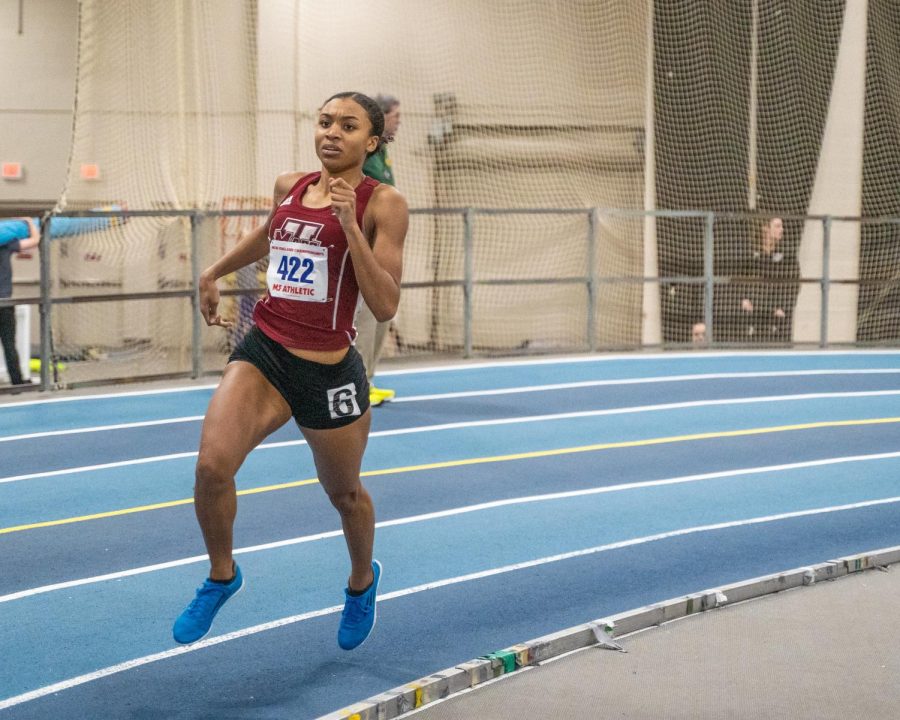 After starting its indoor season back on Dec. 7, Massachusetts track and field got back to work this weekend at Harvard’s two-day multi-meet and Saturday’s “Beantown Challenge”. This was the first of six straight weekends of competition.

The Minutewomen earned fourth place. The team trailed only Brown, UConn, and host Harvard, which took control of the meet with a winning total of 128.5 points.

Most outstanding for UMass was Friday’s pentathlon. Senior Jada Harris, in her first time competing in the event, beat out the rest of the competition with 3579 points. Harris was able to capture first place in the 60-meter hurdles, long jump, and high jump, in which she is an All-American.

Kira Kopec is one of the top returning pentathletes in the conference, and came in second place out of 24 athletes. Kopec is close to improving her best score even this early in the season.

“What was really nice for Kopec was that she was just 12 points shy of her personal record,” said women’s head coach Julie LaFreniere, “She is always very hard on herself and never satisfied. She is a hard-working, talented young lady.”

In the season’s first multi-meet, Matthew Tarantino and Thomas O’Donoghue used their versatility to finish third and fourth in the men’s heptathlon, respectively, which is the event they will focus on throughout the season.

“The guys are really taking the challenge on, being the only two guys that we have thus far to multi, so they’re taking the responsibility and running with it,” said men’s coach David Jackson.

Tarantino is part of a class with a depth of talent, as sophomores posted the top times for UMass in the 200-meter, 500-meter, and 1000-meter runs.

“Across the board we have a talented group and everybody in our wheelhouse is talented enough to score when we go to conference, so that is my expectation for them,” Jackson said about his team’s ability.

Notable individual efforts on Saturday include senior Connor Ross coming in sixth place with a 4:17.2 mile and junior Coston O’Brien earning six points between shot put and weight throw. Noah Kortkamp had the best finish of the night for the men’s team, coming in third in long jump after also placing seventh in the 60-meter hurdles, capturing a total of eight points.

Samantha Thompson won the high jump with a jump of 1.71 meters. Thompson, who would normally be joined by Harris if not for the Multi-meet, is part of a deep team of field athletes. Of the women’s 63 points, 39 came off the track.

Juniors Danielle Notarfrancesco and Lauren LaDere contributed in shot put to gain 11 points on throws of 14.32 and 13.83 meters to earn third and fourth place respectively. Notarfrancesco also came in eighth in the weight throw.

“We expect a lot from our throwers and they consistently perform,” LaFreniere said.

Topping off the list of personal performances was Sofia Casciano in pole vault.

Characteristic of both UMass teams was the use of this meet to train through secondary events. This meant runners participating in events that are not their usual, such as captain Lindsay Witt who sprinted the 60-meter dash and ran the first leg of the 4×440 yard relay instead of the individual 100- or 200-meter dashes.

“For Tyler Glendon I like to have him running [the 60-meter dash] as a long jumper because that’s the meat of his ability to jump far – to make it down the runway fast and efficiently,” Jackson said, “so it is still training for him.”

Through this training and continued preparation both teams head into the next meet with confidence.