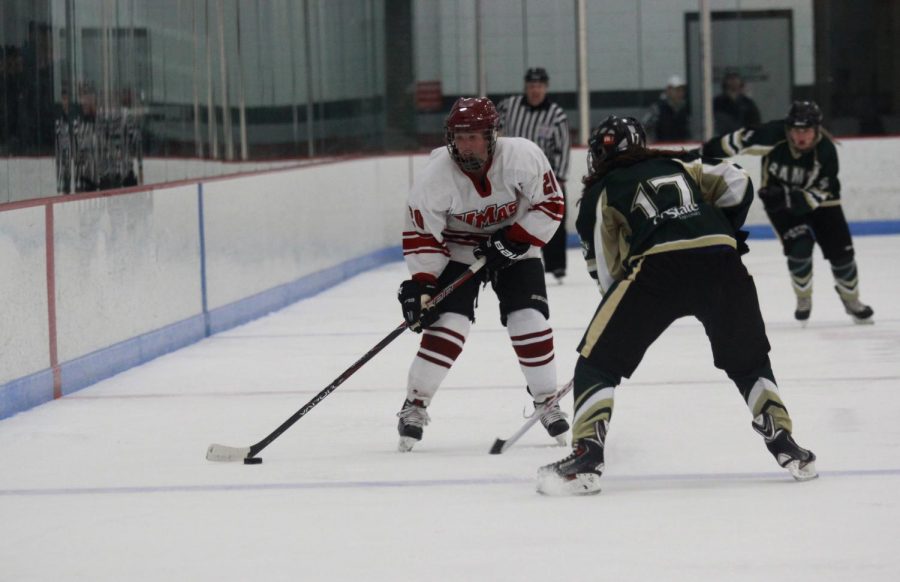 After dropping to No. 6 in the ACHA rankings, the Massachusetts women’s club hockey team has a chance to complete a four-game season sweep of Penn State with two home games this weekend.

UMass (11-6-1) dropped after suffering a 1-0 loss to Midland University. The Minutewomen need to stay ranked in the top eight so they can compete in nationals. Coach Bill Wright knows that Penn State (4-9-0) can cause some problems for his group, highlighting the close game Penn State played against No. 2 Lindenwood.

“They can play good games against good teams,” said Wright. “They can get strong goaltending and really be someone we can’t take lightly.”

The Nittany Lions goaltending didn’t pose any issues in their back-to-back weekend matchups in early November. UMass rolled to a 6-1 win, following it up with a 3-0 shutout the next game, limiting Penn State’s offensive production.

“When Casey [Marshall] is playing well, she limits her rebounds,” said Wright. “When we are playing well as a group in front of her, we’re not allowing any free shots on net and blocking shots when we can.”

Marshall faced only 12 shots on net in the first game as UMass was able to control the puck in their offensive zone. Penn State bounced back getting 25 shots on net, but Marshall was poise and earned the shutout, performing even better in the second game.

“Any game where you’re seeing a minimum amount of shots you’re not as focused as you need to be and it is easier to get caught off guard when you’re not as active as you normally are,” said Wright. “She’s better when she’s busy.”

As the defense has been strong, the focus in practice this week was on the offensive side. In the last three games, the Minutewomen scored two goals, with both coming in same game. UMass was shutout on the road by McKendree University and at home against Midland University.

“We got back to focusing on the scoring part of the drills that we do in practice and emphasizing on finishing those drills,” said Wright. “There are no layups.”

With only four home games to be played in the next two weeks, nationals are set to take place just over a month from now. This is a very young team, consisting of five upperclassman and the rest being a mix of sophomores and freshman. Senior forward Juliana Dolan, junior forward Gabby Martinez, junior forward Sandra Bienkowski, and junior defensewoman Kelly Demarco have been leaders for the underclassman because of their national tournament experience.

“They [upperclassmen] know what it takes to get there,” said Wright. “That strong group of leaders has instilled that in the sophomores, and the sophomores are dragging the freshman along with them whether they want to or not.”

“Either you’re in rowing the boat, or you’re out.”

Wright said the personalities of all his leaders differ and have their own unique style of leadership, which is a positive influence on the freshmen. The different personalities of the leadership group provide balance for the underclassmen.