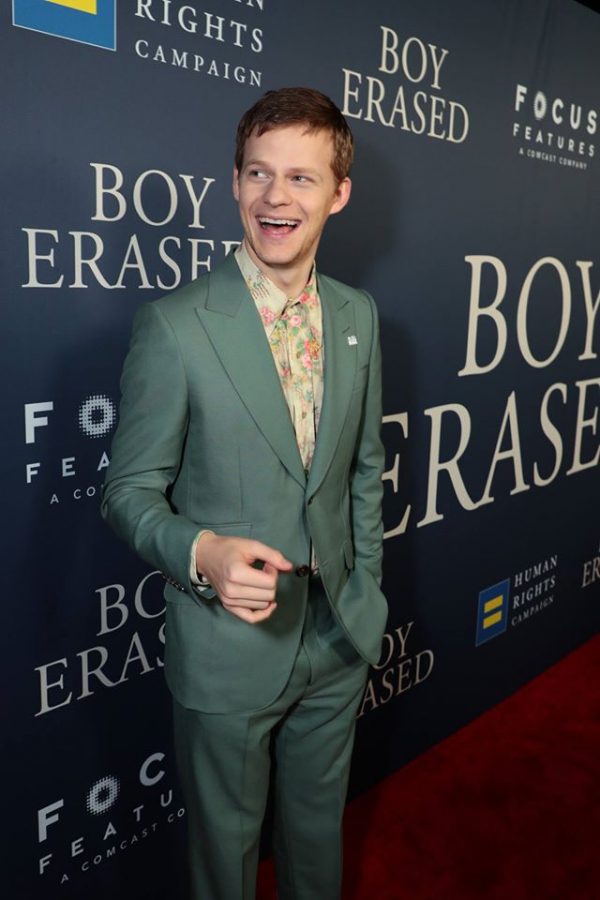 Every few years, a new generation of adolescent actors arise as somewhat of a modern day “brat pack” in coming of age film. Alongside such actors like Saoirse Ronan and Beanie Feldstein, 23-year-old Lucas Hedges is becoming one of the most ubiquitous actors in the industry. Since 2017, he has landed seven lead or supporting roles in well-known films like Kenneth Lonergan’s “Manchester by the Sea” and Jonah Hill’s “Mid90s.” Hedges’ career includes a diverse set of roles; an aspect he uses to both challenge and inspire him as his career moves forward.

Born to writer and producer Peter Hedges, who wrote the screenplay for “What’s Eating Gilbert Grape,” Lucas took inspiration from his father to become an actor from an early age. After growing up in New York, Hedges studied theater at the University of North Carolina School of the Arts. But long before his collegiate acting, his first on screen performance was in his father’s film “Dan in Real Life,” where Hedges features as an extra. Now, Hedges’ character list includes a vast amount of various different roles.

“One of the ways in which I try to approach these parts is with the sense that every character’s come to me to heal something in my life,” Hedges said in a 2018 interview with MTV on his part in Joel Edgerton’s “Boy Erased.” The story is based on Garrard Conley’s memoir of the same name that reflects on his experience in a gay conversion therapy program as a teenager. Hedges brings his character, 19-year-old Jared Eamons, to life to tell Conley’s story of resilience and his life moving forward after his time there.

“It’s hard not to approach a project that is meant to heal from a place of love,” Hedges said.

Hedges’ fluidity in his profession is what drew long-time actor and now director Jonah Hill to cast him as Ian in his directorial debut “Mid90s.” Fellow actress and sister to Hill, Beanie Feldstein, introduced the two during her and Hedges’ time shooting “Lady Bird” back in 2016.

“My whole instinct on casting is cast the opposite,” Hill said in an interview with TIFF Originals. In the movie, Ian is a stone cold, physically abusive older brother to Stevie, played by Sunny Suljic. Hill describes Hedges as emotive, expressive and sensitive and believes this layer of his personality acts as an interesting veneer beneath the role Hedges is playing.

A new experience for Hedges’ was his lead role in “Ben is Back,” where he acts alongside Julia Roberts to portray 24 intense hours between a mother and her recovering addict son. To help strengthen the bond the two share in the film, Hedges and Roberts spent time together outside of shooting to create a mother-son relationship in real life.

“Lucas was very open to me,” Roberts told interviewer Jake Hamilton of Youtube channel “Jake’s Takes.” The two even spent Thanksgiving together at Roberts’ house because, she says, “there is no better way to get to know someone than to step into their house.” This bond the two created proved useful, as they remain friends since the film’s wrap.

Hedges’ most recent role was in Trey Edward Shults’ “Waves,” a cinematic conglomeration of vibrant colors and moving shots. The movie tells the heavy story of a family in Florida and their experience through tragedy, loss and healing with Hedges playing Luke, the boyfriend of actress Taylor Russell’s character Emily. Other breakout stars such as Alexa Demie of HBO’s “Euphoria” accompany Hedges in the cast. At the Telluride Film Festival, the cast described the creation of the movie as heart-wrenching and inspiring.

“I’ve never had this experience watching a movie I’ve been in,” Hedges said. “Art like that takes away a kind of fear, in a way.” Hedges typically tries to avoid watching himself act, and explains he came prepared with a notebook to criticize parts of his acting upon seeing the final product for the first time. However, to his surprise, he never touched the notebook.

“Waves” premiered on Nov. 15, 2019 and remains Hedges’ most recent work. The star told The Hollywood Reporter in February that he planned to take some time for relationship building and connecting back with his real life for a while. Whatever comes next for him, the world can depend on Hedges to deliver.

Hedges told Hamilton in his “Jake’s Takes” interview that even his first on-screen part is important to him. Though his part in it was small, when asked his first choice of work to show his future children, he answered “Dan in Real Life.” He also feels the film accurately gives a sense into someone eternally important in his life—his father.

“I think you get a little glimpse into who I was as a kid, and you get to see the dad I grew up with,” he said. “‘Dan in Real Life’ is very representative of who my dad is, and it would be really cool to share that.”