No teams have clinched a playoff berth 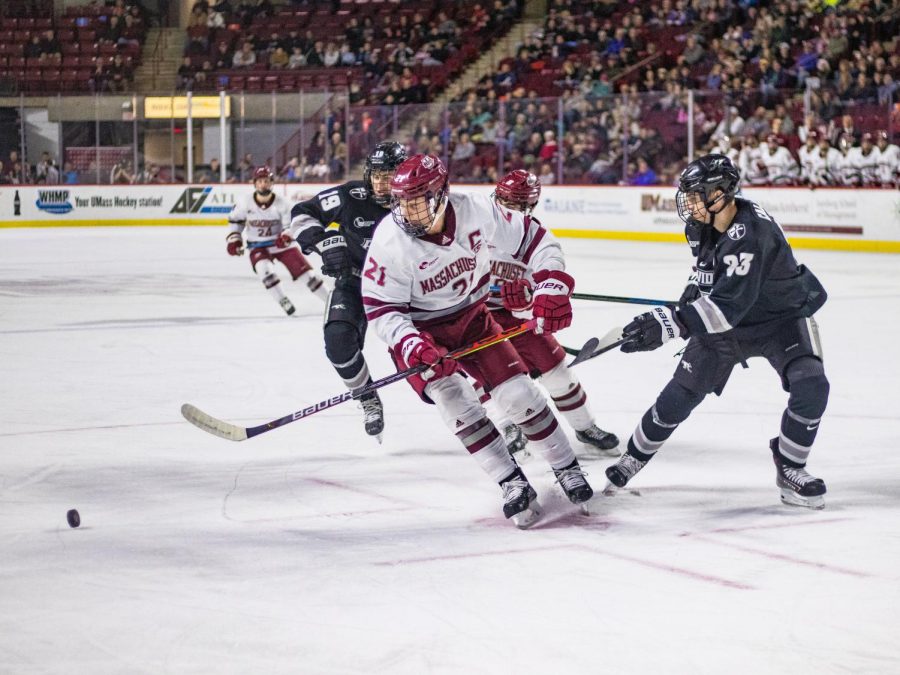 With three weeks left in the regular season, the Massachusetts hockey team and the rest of Hockey East head toward the conference playoffs with little clarity as to who will end up where.

Five Hockey East teams currently sit in the top-16 of the pairwise rankings. With the eight league playoff spots and the 16 NCAA Tournament spots up for grabs, let’s take a look at how the Minutemen and the rest of the conference stack up.

The Eagles might have the most well-rounded team in Hockey East with the No. 1 offense and No. 2 defense. A game in hand on UMass gives them a slight edge but a two-game series with a top-10 Northeastern team this weekend will be key if BC is to clinch the one seed in the playoffs. While the Eagles seem poised to host an opening round series, a bad weekend the rest of the way could see them drop, as only three points separates them from a bottom-four seed at the moment.

The Minutemen are in a good spot — tied for first with five games to play. However, if UMass is to capture its second-straight regular season crown, it’ll need some help. Not only does BC have a game in hand on the Minutemen but it also holds the tiebreaker should it come down to that. A tough series against UMass Lowell will be the biggest test remaining as, after those two games, Greg Carvel’s team takes on eighth-place Connecticut followed by a game with cellar-dweller Vermont.

The Terriers being in third place may come as a surprise to some. After all, BU is the only unranked team in Hockey East’s top seven. The Terriers have ridden their high-powered offense — second best in Hockey East and 12th-best in the country — to another successful season. Although BU has played well this year, it struggled on the road this season, with a 4-5-3 record away from Agganis Arena. Just a point back of first place, the Terriers play five more times, three of those at home, making it a strong chance they will host a playoff series.

The River Hawks season is entering a make-or-break stretch beginning this weekend with two games with UMass. UML ranks 15th in pairwise, meaning it’ll want to move up a few spots to be safely inside the NCAA tournament picture once automatic bids are determined. The River Hawks also sit right on the line between hosting a playoff series and not, as they’re currently in a tie for fourth in the conference. A game in hand on Maine will help, but a strong weekend against the No. 8 Minutemen will go a long way in securing home ice.

It has been dominant play at home all season that’s put the Black Bears in position to claim a top-four seed in the playoffs. Maine just lost its first home game of the season this past weekend and now finds itself 14th in pairwise, looking to make a run at an NCAA tournament appearance. The Black Bears started off Hockey East play with a 4-9-2 record, but a late-January sweep of BC kicked off a 6-1-0 stretch that has surged them into a tie for fourth with four games to play. A series with struggling Vermont this weekend gives Maine a chance to keep its strong run of play going.

If there were ever an example of the volatility atop Hockey East this year, Northeastern would be it. The Huskies have been top-10 in both the polls and pairwise rankings most of the season but as recently as last weekend found themselves on the outside looking in of the Hockey East playoffs. Now tied for sixth, Northeastern could reasonably find itself finishing anywhere between first and ninth depending on how it plays down the stretch, starting with BC this weekend.

Coming off three-straight losses — one to Northeastern and two to UMass — Providence went to Vermont last weekend to face the last-place Catamounts with a chance to right the ship. While the Friars took three of a possible four points, they won’t be pleased with giving Vermont its third point in conference play of the season as they battle for a playoff spot.

UConn finds itself one point clear of UNH for a playoff spot in the conference. With the tiebreaker over New Hampshire in their back pocket, the Huskies have a challenging final five games — two with BU, two with UMass and one with UMass Lowell. UConn’s defense is 49th in the country in terms of scoring and will need its back end to step up over the final few weeks against some of Hockey East’s best.

While unlikely, the Wildcats are technically still in play for the one seed in the conference tournament. While UNH could realistically find itself hosting a playoff series, its more likely to end up in the bottom half, maybe even missing the playoffs all together. Things are getting dire in Durham and the Wildcats will need help. UNH will have to take care of business itself if it hopes to sneak into the playoffs. With games against UMass Lowell and BC to close out the year, it won’t be easy, but only one point separates them from a playoff spot at the moment.

The Warriors have officially been relegated to the role of spoiler after getting swept by BC last weekend, eliminating them from playoff contention. Merrimack will have a chance to cause chaos in the Hockey East over the final couple of weeks with games against Providence and BC remaining. The Warriors have shown their ability to hang with teams this year, beating BU, UConn and UNH this year to go along with ties against Northeastern and UMass.

The Catamounts have had a disappointing season to say the least. Still looking for its first conference win of the season, Vermont will be hard-pressed to find it over the closing weeks with games against Maine, Northeastern and UMass. While unlikely the Catamounts cause much trouble, they are coming off a tie of Providence and more results like that could have big ramifications for the rest of Hockey East.