Around Hockey East: The battle for the last playoff spot heats up 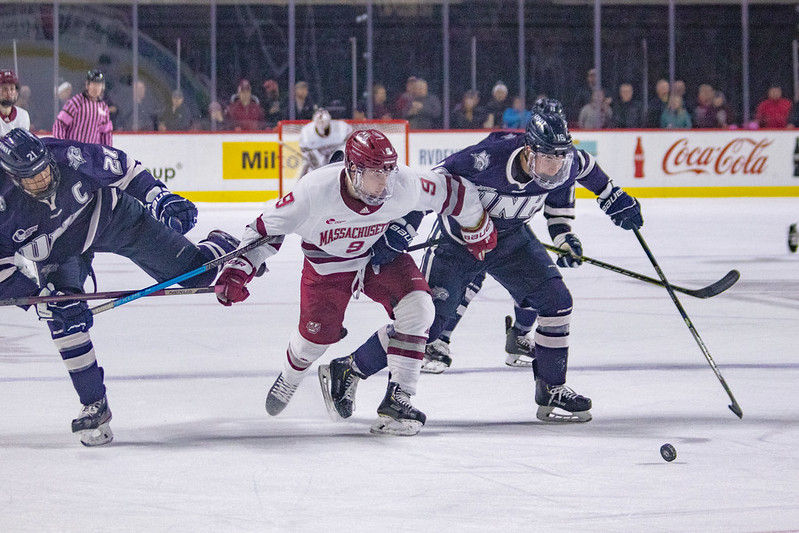 Last weekend’s slate of games offered some insight into where the Massachusetts hockey team and the rest of Hockey East will shake out come season’s end.

With nine teams clamoring for the eight playoff spots, it’s becoming increasingly more likely where each team will fall. So, let’s take a look at where the Hockey East playoff race stands with two weeks of games left.

The Eagles have all but wrapped up the regular season Hockey East championship. Though technically BC could finish as low as sixth, they are pretty much a shoo-in to claim the No. 1 seed in the playoffs. With games against Merrimack, Boston University and a series with New Hampshire remaining, the Eagles need to take just three points from four games to guarantee the regular season crown, and that’s assuming UMass doesn’t drop points along the way.

As mentioned in BC section, the Minutemen are pretty much out of the race for the one seed. PlayoffStatus.com pegs their chances at 3 percent to repeat as regular season champions. After securing a playoff berth this past weekend, UMass’ focus turns to securing home ice in the first round. Only three points separate the Minutemen from the bottom half of the playoffs.

Sitting in third, the Black Bears would host a playoff series if the season ended today. That bodes well for a team that is 12-1-3 at home this season. Two games with Providence remain for Maine and its play in those two games could drastically shape its playoff outlook with two teams only a point behind in the standings.

The Huskies have surged in the Hockey East standings. Just last week, I was looking at them as a playoff bubble team. Now, after sweeping BU, UConn sits ready to host a playoff series. Two games with UMass and one with UMass Lowell don’t make for an easy close to the season but the Huskies are hot, winners of five of their last six, and could realistically finish in the top half.

UML controls its own destiny the rest of the way. With home ice as their goal, the River Hawks take on ninth-place New Hampshire twice before facing off with UConn. As things stand right now, that UConn game could have big seeding implications. If the game were happening today, it would determine who would host a series between the two teams in the first round.

The Terriers fell victim to a red-hot UConn team this past weekend, dropping both games to fall from third place to sixth. While there remains an outside chance BU misses the playoffs, its concern should be whether or not it can work its way back into the top four. Their top-tier offense failed them against UConn, but the Terriers can’t stew on those results with BC and Northeastern on the horizon.

Northeastern probably won’t finish top-two in the league, but third or fourth is very much within reach despite sitting in a seventh-place tie. Two games with Vermont this weekend offer the Huskies an opportunity to pick up some easy points while teams ahead of them beat each other up. Two games with BU will present much more of a challenge, but Northeastern is more than capable of getting two-plus points from that series. A 10-1 defeat to BC last Friday is alarming, but this team is too talented, even without Tyler Madden, to drop lower than eighth.

Providence appears to be in free fall. In their last nine games, the Friars have just five points. All five of those points came against teams outside the playoff picture, three of which came against winless Vermont. Providence will need to pull it together to avoid missing the playoffs altogether. A sweep of Maine to close the season no longer guarantees them anything, as the Friars have opened the door for UNH to swipe a playoff spot.

On the outside looking in, UNH controls its own destiny. With two games in hand on Providence, the Wildcats need seven points out of their final four games to assure a playoff appearance. With games against UML and BC to close the season, its not an easy task. The silver lining for the Wildcats should be their record against top teams, 5-2-1 against ranked opponents.

The Warriors waited until too late in the year to find their groove. A sweep over Providence last weekend was Merrimack’s first Hockey East sweep of the year, a week after being eliminated from the playoffs. The Warriors take on BC to close out their season and can make things complicated for the Eagles if they keep up their strong play.

Vermont has three more chances to record its first Hockey East win of the year. Two games with Northeastern and one with UMass are the Catamounts’ only remaining chances, making it an unlikely proposition. If there is any reason to believe UVM will come out ready to play, its worth keeping in mind it will be sending off head coach Kevin Sneddon, who is retiring at season’s end.