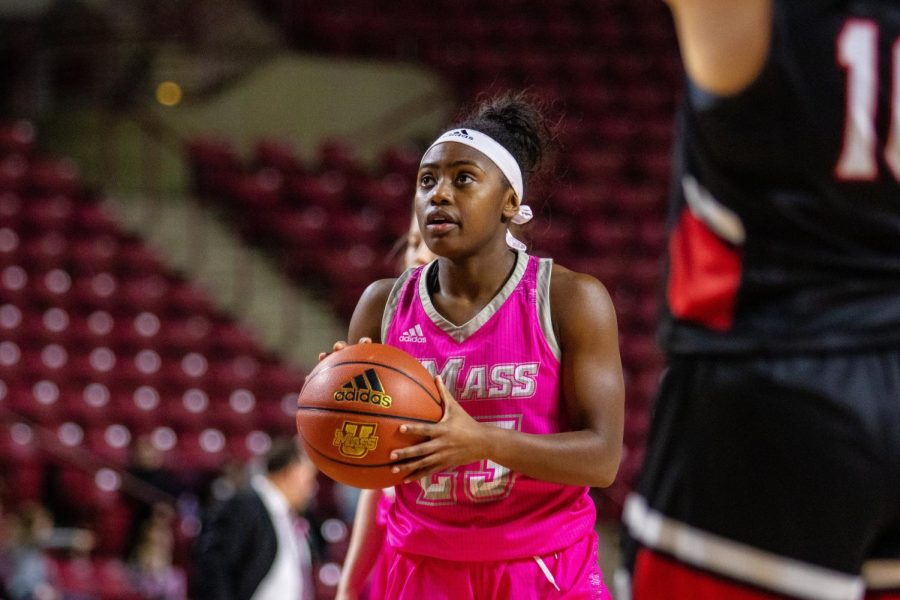 The Massachusetts women’s basketball season has been a bit of a roller coaster. After its 76-62 victory over La Salle on Jan. 15, UMass was 4-0 in the Atlantic 10 for the first time since before anyone on the team was even born. They were also in the midst of a program record 11-game winning streak.

Since then, times haven’t been as kind to the Minutewomen (17-10, 7-7 A-10), who’ve lost seven of their last 10 including losses to last-place George Mason and George Washington, which sits below .500.

Saturday’s win over Davidson moves them to 7-7 in the A-10, good enough for fifth in the standings, holding the tiebreaker over the three other teams with identical records. With the top seven teams earning home-court advantage in the opening round of the A-10 tournament, UMass is in prime position to host a tournament game at the Mullins Center for the first time since the 2006-07 season.

Two wins this upcoming week, against Saint Joseph’s on Wednesday and Rhode Island on Saturday, would get the job done. Two losses and the Minutewomen are hitting the road. A split and their fate will be determined by the play of other A-10 teams.

It’s safe to say this is a big week for UMass, but it knows that if it sticks to its goal of getting better every day, as coach Tory Verdi says, then the results will take care of themselves.

“It’s pivotal,” Verdi said about the importance of the final stretch. “We knew that prior to the Davidson game. But we keep preaching that we are just trying to get better every single day, so whatever happens, happens. But if we play the game the way that we’ve practiced, good things are going to happen for us.”

The Minutewomen enter the week with a quiet confidence. The pressure of a lengthy win streak or regular season title are off their shoulders. The games are huge, but Verdi will tell you that every A-10 game up until this point has been equally huge.

He will also tell you that there are no nights off in the conference meaning every game is a test. UMass has passed some of these tests, like its 13-point comeback victory against Davidson earlier this month, but failed others.

All of them are valuable heading into the final week of the regular season and the playoff tournament for what are undoubtedly season-altering games.

“Yeah, there’s no question about it,” Verdi said. “I think every season is a rollercoaster ride. You are never too high, and you hope to never get too low. But we’ve had our moments of both. But we have a little momentum right now coming off of last game and hope to build off of it.”

The two opponents are both very familiar to the Minutewomen.

The Minutewomen bested Saint Joe’s earlier this season, defeating the Hawks 61-43 for their 10th straight win in their 11-game streak. UMass saw that streak come to an end two games later at the hands of URI on Jan. 19, falling 69-66.

“They’re playing extremely hard and they’re not giving up,” he said. “They’re better at home than they are on the road so, we expect a tough fight. I’m looking forward to going down and seeing my team respond. But we’re focused on them and once that game is over, we will focus on Rhode Island.”

Wednesday’s game is set to tip off at 7 p.m., while Saturday’s Senior Day game will start at noon.