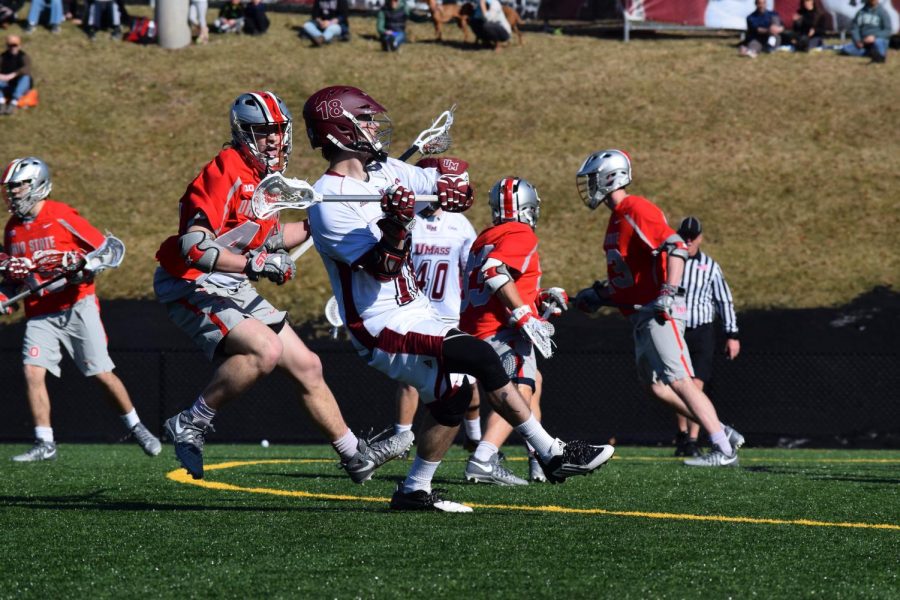 No. 4 Maryland completed a stunning comeback in double overtime against Richmond for a 14-13 victory on Saturday.

The Terrapins were down five early in the fourth quarter, but rallied behind Anthony Demaio as well as Logan Wisnauskas and Jared Bernhardt. Wisnauskas finished the game with three goals and four assists, while Bernhardt added another three goals to go along with one assist.

DeMaio put the finishing touch on the comeback, getting his second goal of the day past Spiders goalie Jack Rusbuldt to secure the win. DeMaio also added three assists to his impressive day.

Despite the loss, Richmond had an impressive performance in its own right, nearly toppling the fourth-ranked team in the nation. Richie Connell and Mitch Savoca each tallied a hat trick for the Spiders, and face-off specialist Andrew Hamilton won 17 of his 30 faceoffs.

After a tight first quarter that ended tied at four, Richmond dominated the next two, outscoring Maryland 7-3 over that time. But ultimately it wouldn’t be enough to hold off the Terps.

Although both teams’ attacking units found success, it was not a bad outing for the keepers overall, as Rusbuldt finished with 11 saves and Maryland goalie Chris Brandau stopped 10.

The Terrapins will look to keep their momentum going when they play Penn next week at home, while the Spiders will play their next game on Friday night against Marist.

Ohio State travelled to Boston on Saturday and dominated the Terriers, earning an 11-4 win on the road.

Tre Leclaire and Jack Myers each put up two goals and one assist in the game, but the story for the Buckeyes was their goalie. Massachusetts native Josh Kirson did not disappoint in his homecoming, stopping an impressive 18 of 22 shots by BU.

The Terriers had more shots in the game then Ohio State did, but their inability to get balls past Kirson cost them. Those struggles carried over from last week, when BU was only able to score five goals in its loss to Providence.

On the other hand, the Buckeyes have had no problem finding the back of the net so far this season. They have already scored 34 goals in their first two games, starting last week against Detroit Mercy and now against the Terriers. Myers and Leclaire alone have accounted for 14 of those goals.

Ohio State has been a nightmare for opposing teams to deal with so far, and it will look to continue its hot start when it takes on UMass this Saturday in Columbus. As for BU, it’ll look to snap an early two-game losing streak next week against UMass Lowell.

Johns Hopkins defeated Towson 15-7 in a top-20 matchup that saw the Blue Jays jump ahead early and never let up.

Cole Williams racked up three goals and four assists, while teammates Garrett Degnon and Connor DeSimone each buried three in their own right.

The Tigers struggled in all aspects of the game from start to finish, losing the majority of their faceoffs and allowing Johns Hopkins a lot of opportunities to score on Tyler Canto, who did manage to save 15 of the 30 shots thrown his way. Canto had a great game, but the Towson defense did not hold up its end of the bargain, and made it very difficult for him to keep the game in hand.

On the other side of the field, Ryan Darby made 11 saves for Johns Hopkins.

For the Blue Jays, their win capped off a remarkable day for Big Ten Lacrosse. Every Big Ten team playing on Saturday (Ohio State, Maryland, Johns Hopkins, Rutgers, Michigan and Penn State) was able to secure a win.

Johns Hopkins will try and continue to climb into the top 10 when it travels just down the road to play Loyola this Saturday.

Colin McCarthy can be reached at [email protected]