Bortle: UMass’ defense will be the difference maker this weekend and beyond

The Minutemen rank fourth in the country in scoring defense 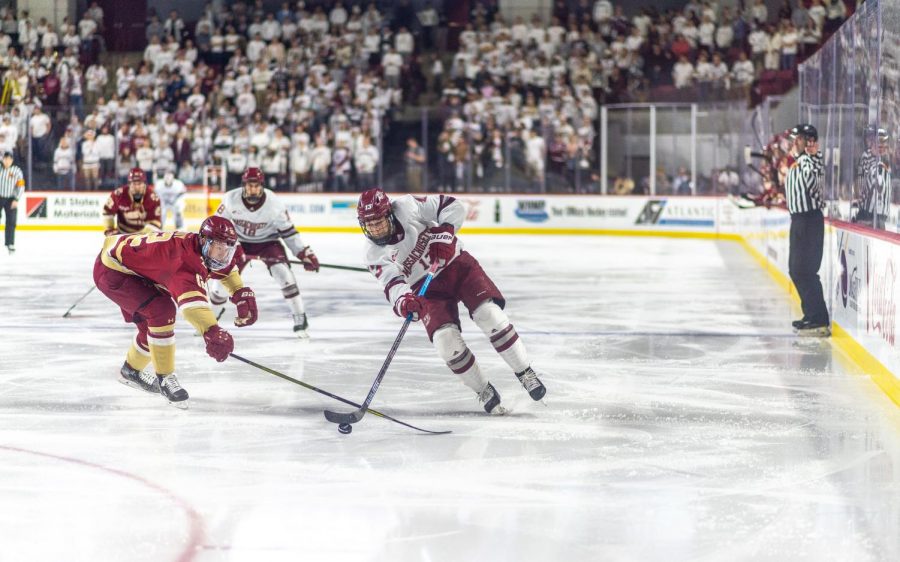 The Massachusetts hockey team has become known for its high-flying offense over the past two seasons, but it will be up to the team’s defense to determine whether or not it repeats as Hockey East regular season champions.

While the Minutemen still possess the ability to score at a high level — they sit 18th in the country in scoring and feature two players in the top-four in the national goals column — their identity this season is that of a defensive heavyweight.

UMass’ offense has sputtered as of late. Since winter break the Minutemen are averaging 2.40 goals per game which would rank 44th out of the 60 teams in Division I. In their last three games, they’ve only scored once.

While UMass’ offense has struggled, its defense ranks fourth in the country.

With a home-and-home against Providence (14-7-5, 8-6-2 HEA) on the horizon this weekend, the back end won’t get a break. The Friars’ come equipped with the seventh-best offense in the country, netting 3.50 goals per game.

Providence forward Jack Dugan sits atop the country in points with 44. Dugan’s teammate Tyce Thompson sits just two spots behind him with 38 points, creating a dangerous duo for the Friars. Despite the elite one-two punch, UMass coach Greg Carvel doesn’t think Providence offers much more than his defense has already seen.

“[The challenge is the] same as everybody else,” Carvel said. “They got Dugan who I think leads the country in scoring. BC — their first line is really strong too. Most team’s first line, there’s a separation between their first line and the rest of the lines and that’ll be the same so same challenges, same problems.”

The Minutemen will need their defense to remain as stout as it has been if they are to keep pace at the top of the Hockey East.

“Everything they [Providence] do is with high level of intensity,” goaltender Matt Murray said, “and we’ll have no choice but to match that or go beyond because it’s going to be a close weekend.”

UMass has had little trouble against the top-end Hockey East offenses thus far as it is tied for the fewest goals allowed in the conference. A key to that success has been the play of the goalie tandem of Filip Lindberg and Matt Murray.

The pair hold the fifth and sixth-best goals against averages in the country, respectively, while Lindberg’s .930 save percentage puts him in the top-10 of that category as well.

“I think our back end has been great,” Murray said, “both Filip and I, and then all the d-men in front of us as well. Everyone’s been doing a very good job at that. I think right now it’s just about doubling down and doing everything you can.”

Beyond the expectation that the Minutemen be an offense-first team, their defensive success becomes even more surprising when it’s taken into account that they’ve regularly dressed two or three freshman defensemen.

In October, Carvel pointed to the youth on the back end, saying, “those young defensemen, they don’t know how to defend at this level. And as good of players any of them are with the puck, it’s a struggle. So, if I wasn’t seeing growth I’d be concerned, but I am seeing it.”

It’s probably safe to say the defensive unit has made it through the growing pains all right and those young freshmen have learned to defend at the college level now that UMass is letting up just 1.96 goals per game.

Clearly the Minutemen’s current offensive woes aren’t something that should continue. No one expects them to score at the lowly pace they have been over their past three games — they have too much talent — but if UMass is to secure the Hockey East regular season crown for a second-straight year, it’s going to need to continue doing what’s got it this far: that lockdown play in the defensive zone.