Breen’s impact being felt all over the floor for Minutewomen 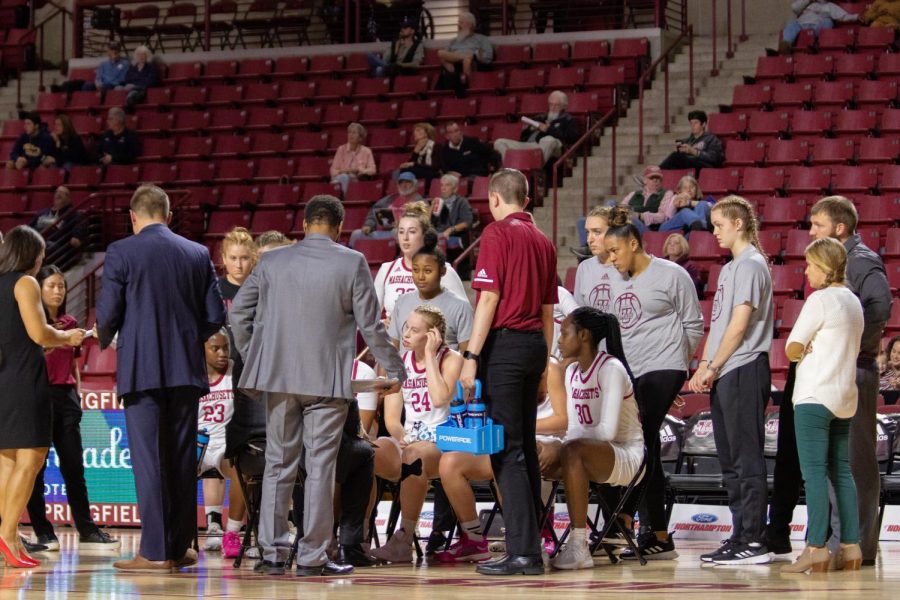 Sam Breen has been in the Massachusetts women’s basketball starting lineup for the past five games. You could call those games, “The Sam Breen Show”.

The former Penn State transfer has been everything UMass (16-9, 6-6 Atlantic 10) has wanted and then some, dropping 23 points and adding 12 boards in UMass’ 52-51 loss against Dayton Wednesday night.

Breen has at least 20 points in all the games she has started this season and is playing with a ton of confidence. An assurance which she says she’s been building up since stepping foot on the UMass campus last winter.

“I think just coming here in general, my confidence has gone up,” she said. “Coach Verdi, coach Leflar, and really all the coaches have a lot of confidence in me and that helps build up mine, obviously. I think working everyday on different moves, different things I can do, just helps me in games so I’m not going out there blind.”

The man who recruited her, Minutewomen head coach Tory Verdi, is hardly surprised that Breen is having this kind of success.

“Her ability to score is something that I’ve seen for the last year,” Verdi said. “It was just a matter of time until she got into the lineup. So, regardless of if she’s coming of the bench or in the starting lineup Sam has that ability to score and we’re able to see that on a nightly basis”

Her presence offensively has eased the burden of senior captain Hailey Leidel. Since Leidel first became a Minutewomen, her teammates have looked to her to be the catalyst offensively. With Breen on the floor, a lot of the pressures to score are lifted from Leidel and she’s not seeing as many double teams.

It is a welcome sight for Leidel.

“It is always nice having someone else who can put up a lot of points,” she said. “She just draws so much attention in the post especially if she gets doubled or something its going to open up someone. Maybe not me, but someone on our team is going to get open. It is just nice to have multiple threats at different parts of the court.”

Breen’s impact extends far beyond just the offensive side of the floor. When she came off the bench, she played mostly the five, or the center position. Now that she’s in the first unit, she is playing power forward alongside 6-foot 5-inch freshman Maeve Donnelly.

Together the two have formed a nice partnership, particularly on the defensive end of the floor. This was evident against Dayton holding the first-place Flyers to just 52 points on 33 percent shooting from the field.

Before Breen was eligible to play on Dec. 21 due to the NCAA transfer rule, UMass was forced to play a much smaller lineup with four players along the wing and one player, Donnelly, inside. This allowed opponents more driving lanes to the hoop. With Donnelly and Breen, those areas are clogged.

On Wednesday, this forced Dayton into bad possessions and missed shots.

“Changing up our defenses was good. Dayton wants to get out, they want to push, they want to attack,” Verdi said. “We slowed it down and we made it a half-court game. We executed and we made them play the entire shot clock.”

The Donnelly-Breen partnership down low has been steadily improving all throughout the season. The chemistry between the two is something that Breen did not necessarily see before she stepped on the floor.

“It has definitely improved game by game and tonight was probably the best zone we’ve played,” she said. “We’ve definitely been working on it in practice. Me and Maeve have a pretty good connection and I wasn’t sure how that was going to go since she’s a freshman and we haven’t played much together. But practice by practice our chemistry is getting better and we know where each other is on defense. I think us two being on the same page helps everyone be on the same page.”

As the A-10 schedule continues heating up for the Minutewomen, they will need to lean on their bigs down low.