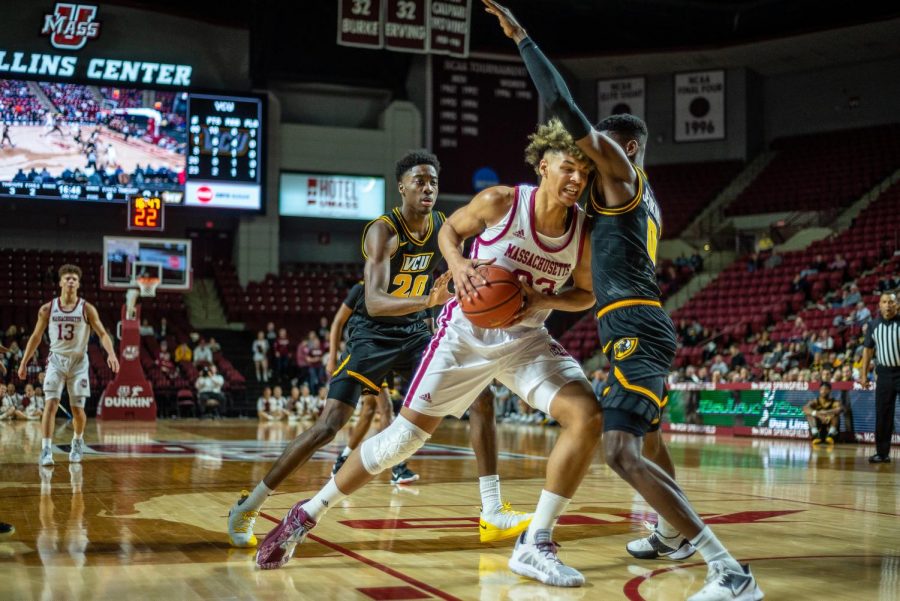 “That was a great win on a lot of different fronts,” McCall said. “I think VCU has been the standard of our league for the last several years.”

UMass pieced together a first half that lacked the usual energy that the group plays with. The Minutemen pride themselves on playing with high effort and diving for any and every loose ball, yet it was the Rams who were able to jump ahead in that category.

Despite missed layups and jumpers, VCU was able to corral a bunch of offensive rebounds early in the game and kept UMass on its toes throughout. An early hot start by Mitchell was negated when the Rams started connecting from three, first one by senior De’Riante Jenkins and then a second by Mike’L Simms to even the score at eight. The two sides traded baskets but another three by Jenkins and one by freshman Nah’Shon Hyland 45 seconds later stretched the VCU lead to four.

The Minutemen kept going underneath screens on pick and rolls and the result was VCU hitting key 3-pointers. UMass was without backup big-man Djery Baptiste, so the plan was to go underneath in order to give Mitchell, who was expected to — and did — play a lot of minutes, some relief defensively. The result was a 33-28 VCU lead at halftime.

UMass kept the game close mostly due to the efforts of Pierre and Mitchell. Mitchell ended the half with 10 points and seven rebounds. Pierre started the game by missing his first three shots, two of which were 3-pointers, but he ended the half with 13 points on 4-of-8 shooting from the field and 3-of-6 from three. The captain has been struggling to get going early all season, but seeing the shot go in seemed to boost his confidence.

“It was big for us,” McCall said. “We need him to be able to do that. He’s struggled to shoot the ball this year and he missed some open ones.

“It’s great to see Carl with the ball going through the net and then him at the end of the game, with the game on the line, at the free throw line, sealing the game for our team.”

In the second half, UMass came out with a renewed focus. After being hounded for their effort in the first half, the Minutemen came out and rattled off four rebounds in the opening minutes to set the tone for the half. There were more bodies jumping at live balls and UMass started to look better defensively. The offensive side of the ball was a different story. Neither team could really put the ball in the bucket and at the media timeout with 14:45 remaining, the score sat at 38-30 VCU lead.

That’s when Sean East checked back into the game.

UMass started a run with a Mitchell 3-pointer. A few possessions later, East grabbed a rebound and nailed a 3-pointer in transition. On the following possession, Pierre hit a three with 11:20 and gave UMass its first lead since the 8-minute mark in the first half. East hit a layup to extend it out a tiny bit, but the two teams traded buckets the rest of the way.

A defensive battle ensued from the 5:46 mark, when UMass led 46-43, as neither team could buy a bucket until 2:30 remaining, when Mitchell hit a jumper to extend UMass’ lead to five. 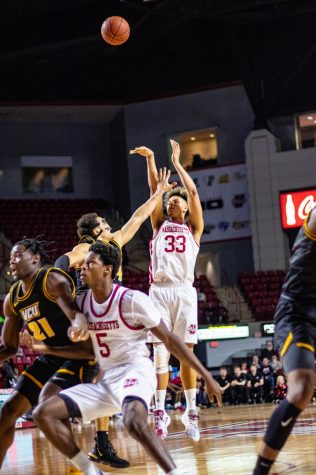 As time started to tick off the clock and UMass remained in front, VCU opted to start fouling. Pierre took the bulk of the attempts, taking six in the closing minutes and making five of them. Despite pressure from the Rams, the Minutemen walked away with the 60-52 victory.

UMass out-rebounded VCU 24-15 in the second half, completely flipping the switch from the first half. Mitchell had eight second-half rebounds and three blocks, two of which came on Jenkins and Marcus Santos-Silva in the final minutes.

Mitchell’s improved defense has been big for the Minutemen. He’s taken on the role of quarterback since the turn of the year, talking to his teammates and being active around the rim. Without Baptiste in the game, Mitchell had to be smart and was just that. Finishing with three blocks and two steals, Mitchell was the anchor that UMass needed to push over the hump.

“It’s great,” Pierre said. “It allows us guards to get aggressive up there and really fly around. At the end of that game, we could just fly around and be aggressive knowing that he was back there and he’ll clean up our mistakes.”

With the win, the Minutemen (13-15, 7-8 Atlantic 10) move to eighth place in the conference and almost certainly has played its way to a first-round bye at next month’s A-10 tournament.

UMass is on the road on Saturday, as it travels to take on Richmond at 6 p.m.

Javier can be reached at [email protected], and followed on Twitter @JMeloSports.