Defensive versatility the key for UMass against No. 6 Dayton

Minutemen lost 88-60 to the Flyers earlier this season 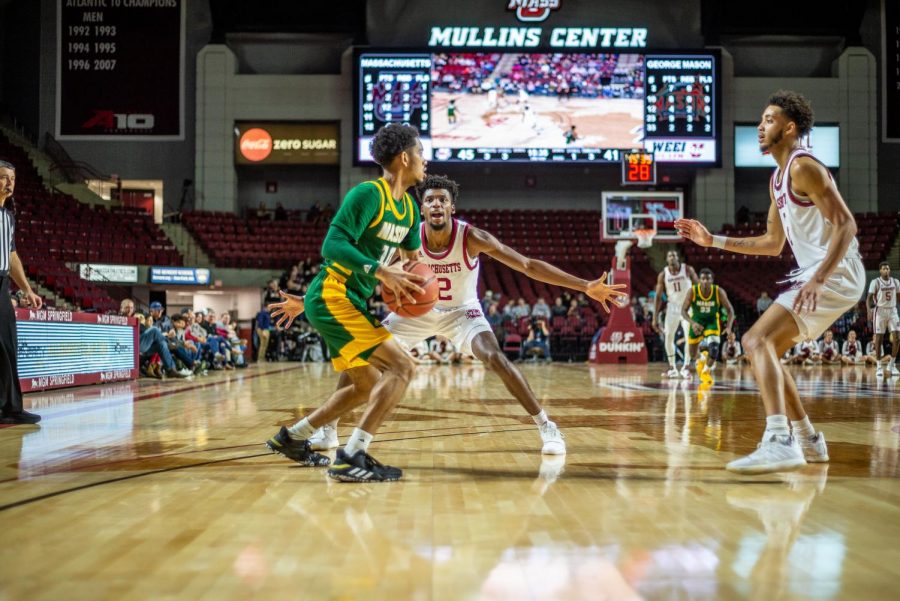 The Massachusetts men’s basketball team will have a major hurdle to jump over on Saturday when No. 6 Dayton comes to town.

The Flyers (22-2, 11-0 Atlantic 10) sit atop the conference and are coming off a win against the second-best team, Rhode Island. With all of the momentum on Dayton’s side, UMass (10-14, 4-7 A-10) will have the tall order of defending what has been one of the most diverse and unstoppable offenses in the country this season.

Redshirt sophomore forward Obi Toppin has been nearly unstoppable this season and is one of the frontrunners for the Naismith College Player of the Year award. He’s currently averaging 19.7 points per game and 7.9 rebounds per game. His game has evolved from just being a player who used his athleticism to bully teams to a skilled offensive player with moves around the basket and the touch to step beyond the arc. Defending Toppin will be the toughest challenge that the Minutemen will face the rest of the season.

“You’ve got to try to take away just the highlight reel lob dunks,” UMass coach Matt McCall said. “You can’t allow him to do those types of things. He’s such a good player that he’s going to make some plays, he’s going to make some baskets, but when he can get out on the break and windmill or [Jalen] Crutcher and [Rodney] Chatman can get down the lane and are throwing him lobs, that ignites their team and we have to try to eliminate those plays.”

Dayton is not a one-man team by any stretch of the imagination. The Flyers have a well-rounded offense that is dangerous from anywhere and under any circumstance. They are averaging 81 points per game on a ridiculous 52 percent from the field and 36.7 percent from three.

In the first game the two teams played this season, Dayton led 48-22 at the half. The final score was 88-60. The Flyers had a poor performance from behind the arc and at the free throw line and still managed to score 88 points. UMass cannot afford to let them live in the paint, where they scored 58 points, or get out on the break, where they scored 26 points.

The defensive pressure has to be interchanging and constant, but not losing sight of the fact that guard Jalen Crutcher is averaging 14.7 points per game on 42 percent shooting from three. Dayton is a rhythm team and in both of its losses this season, which came in overtime against high-level non-conference opponents in Kansas and Colorado, the Flyers were forced to slow down and grind the game, something they weren’t used to.

“Just try to keep them off balance,” junior Carl Pierre said. “Once they get in a groove and get comfortable, it’s tough to stop them, like we saw in the last game. So I think we just keep them off balance, giving them different looks, making them have to adjust constantly – I think that’s our best chance.”

The Minutemen have been coming out with various different looks defensively rather than a set defense. The hybrid schemes have shifted depending on the players on the court. Recently, 2-3 zone defense has been a consistent present on that end. However, depending on the circumstances, the press has been used, man-to-man usually gets implemented for certain stretches and there has even been times where a 3-2 zone has been used. The constant changes and different looks have thrown off opponents and it was evident in UMass’ most recent game against George Mason.

“We’re doing different things with different lineups to try and keep teams off balance,” McCall said. “Playing zone with a certain lineup or man-to-man or press or whatever, so a team like this that has as much talent as they do, we’re not just going to line up toe-to-toe, we’re going to have to keep them guessing and use different lineups and play different defenses and attack them that way.”

In the end, there is no secret formula to beating Dayton. A team like that is just too talented across the board. Kansas and Colorado managed to slow things down and beat them out at the free throw line. In order for UMass to pull off the upset of the season, the defensive side of the ball needs to be emphasized. On Saturday we find out if UMass is able to piece that together.