‘Drunk UMass students’ are not the problem, according to Amherst Fire Department data 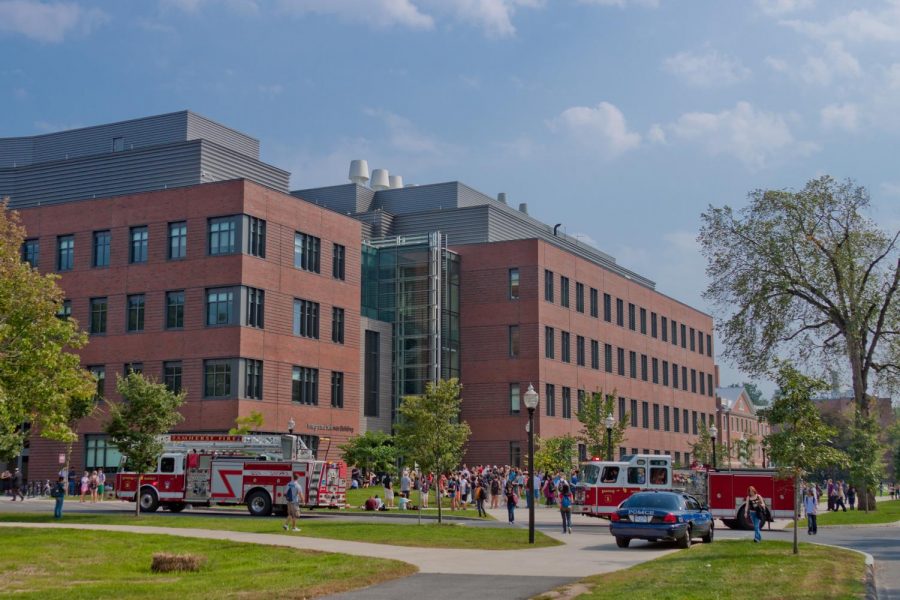 The graph is captioned “‘Drunk UMass kids’ are not the problem,’” and goes on to describe how the number of calls that AFD gets from intoxicated UMass students are relatively low, considering the high student population.

The Facebook post noted that on-campus UMass students, who make up 40 percent of the population protected by AFD, made up “just 18 percent” of AFD’s emergency traffic. In an interview, AFD social media administrator Tom Valle noted that off-campus calls from students are also a part of emergency traffic.

“Students who live off campus pay rent to landlords. The landlords pay property taxes to the Town. These taxes should be paying for the services being delivered to those properties,” said Valle. The total substance abuse calls, both on and off campus, comes to about 8.2 percent of the total call volume.

Because Amherst is a college town, the firefighters do respond to more calls from intoxicated college students than most fire departments, Valle explained.

“Basically, the main industry in Amherst is education, so it should reasonably be assumed that a significant portion of our work is related to that industry,” said Valle.

Fire Chief Tim Nelson agreed, saying, “This is a university, this is a college town, and a long with that you’re going to get those types of issues.”

The AFD has seen a decrease in the number of calls from intoxicated UMass students over the years, despite UMass’ growing population. “If anything, the colleges, especially UMass, have taken steps to reduce their demands on the fire department. This can be seen in the data we collect,” said Valle.

Nelson said this could be because of UMass administration’s efforts to discourage the school’s party culture.

“The school is doing a really good job at trying to dissuade students from making bad choices,” said Nelson.

According to Nelson, one of the things that UMass is doing to keep the number of intoxicated UMass student’s calls low is to have weekly meetings with the Amherst Police Department, the University of Massachusetts Police Department and AFD. These meetings help determine if the three departments are noticing any trends.

“There’s a lot of collaboration, and I think that they’ve all come together to make a big impact,” said Jeff Olmstead, the Amherst fire captain.

“The Amherst Fire Department’s statistics are a good indicator of the collaborative efforts of many partners across the University and in the Town of Amherst as we make progress in reducing high-risk drinking,” said Mary Dettloff, deputy director of UMass News and Media Relations.

The University has also provided AFD with extra funding for the weekends in recent years, to help them handle the extra calls, according to Nelson.

So why do UMass student’s take so much of the blame? They’re an easy scapegoat, according to Nelson: “Folks, for years, have wanted to put the blame on the kids at UMass for all the world’s ills.”

Using the UMass kids as a scapegoat allows the town to ignore the real issue, which is the small size of the AFD, according to Valle.

“Every time the Firefighters have been able to draw attention to the Town’s dangerous staffing levels, the media has asked the Town for a response and the Town blames ‘drunk UMass kids’ rather than acknowledging the crisis or discussing a plan to fix it,” said Valle.

The AFD covers the town of Amherst, including UMass, Amherst College and Hampshire College, according to Olmstead. “All that, that becomes a small city,” said Nelson.

According to a 2017 staffing study, APD is understaffed for the total population that it covers. “We do not have the staff to handle the activities that come from such a large number of folks in our servicedom,” said Nelson.