Prashad challenged the definition of “intellectual” 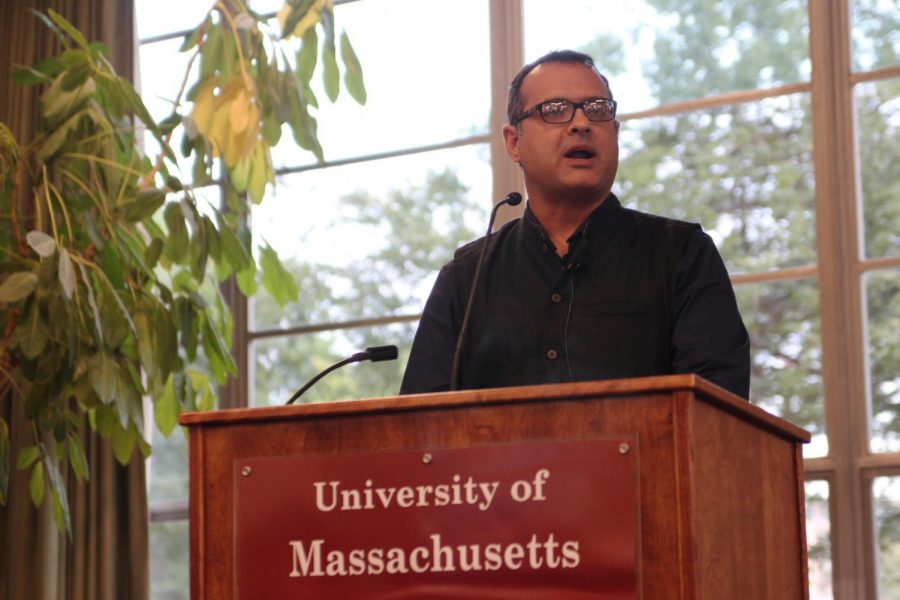 Over 60 students and community members at the University of Massachusetts joined historian Vijay Prashad as he spoke about the “dilemmas of humanity” and social and intellectual theory in a lecture on Wednesday night.

The free event titled, “History to the Defeated May Say Alas,” focused on what it means to “look honestly at the ruins of the past to find shards of hope for the future,” according to the event’s announcement. In an hour-long presentation and Q&A period, followed by a book signing, Prashad touched on many topics, including capitalism, climate change and the role of intellectuals.

Prashad, the 2020 History Writer-In-Residence at the University, said it was a conference held by a movement of landless workers in Brazil which inspired him to leave his academic position and root himself in social movements as part of the Tricontinental: Institute for Social Research, where he is currently the director. His work, he said, takes the dilemmas of humanity, such as hunger, sickness and climate change, and looks to shift the “collective process of thought.”

“[It is] easier to imagine the end of the earth than the end of capitalism,” Prashad said about the current intellectual atmosphere.

The lecture was the third public event Prashad participated in this week as the 2020 History Writer-In-Residence at the University, following a community book discussion and an evening assembly.

Audrey Altstadt, the department chair and a professor of history, introduced Prashad at the event and spoke about the purpose of the “Writer-In-Residence” at the University.

“Our interest is engaging people who write beyond an academic audience,” Altstadt said, noting that Prashad, a “noted historian,” has written 25 books on a variety of topics. Altstadt also referenced Prashad’s work in journalism: Prashad has been a foreign correspondent for “Frontline,” India’s national magazine for over two decades.  Prashad is also the chief editor of LeftWord Books and chief correspondent for Globetrotter.

As Writer-In-Residence, Prashad visited several graduate classes and hosted a writing workshop for students in addition to the events and public lecture, according to a Feb. 12 press release from the University.

Accompanied by a PowerPoint of various art pieces, Prashad combined personal experience with current events and 19th and 20th century social theories. While he noted the importance of intellectuals in identifying issues in the world, he questioned why many intellectuals, both in the 19th century and today, don’t take action to change the world.

On the topic of capitalism, for example, Prashad cited an Oxfam report which states that the 22 richest men in the world have more money than more than 300 million women in Africa.

“There is no need to do further statistical analysis. The number is obscene,” Prashad said. “Everyone knows about inequality. But why is there inequality?”

Prashad continued saying that liberal intellectualism might call for an increase in taxes or a redistribution of wealth, but those actions were “illusionary.” Those solutions, according to Prashad, fail to address that inequality was the result of a process in which corporations use labor to create commodities, enriching the elite and depriving the poor.

Hetty Startup, an Amherst resident who attended the event after hearing about it on social media, said she thought it was “so interesting to hear from a scholar activist.”

“By illustrating his lecture with artwork, he made me want to check out the ideas he was talking about,” Startup said.

Those ideas incorporated many Marxist thinkers, including the interpretations and applications of Fidel Castro’s “battle of ideas” and the work of Italian Marxist Antonio Gramsci, among others.

“Try to listen to the ideas and don’t get distracted by wanting to laugh at me,” Prashad said during his lecture. When he was later asked about the “failure” of Marxism in state structures in the 20th centuries, Prashad pointed out the relative brevity of the movements.

“Capitalist society has failed for centuries.” Prashad noted that a business lecturer is not likely to be asked about the alleged failure of their ideology while Marxists answer questions about theirs.

An overarching theme of the lecture was the role of intellectuals in bringing about change: “The very best of the professors want to understand the world.” Prashad argued that intellectuals need to examine “reality with the ability of transformation.”

“Intellectuals are not a class by themselves,” Prashad stated, noting that “each class produces its own intellectuals.” Although the intellectuals may put themselves forward as neutral, they are shaped by their class consciousness.

To bridge the gap between intellectuals and movements, Prashad said it is important for scholars to be scholars: “Scholars don’t have to be the activist but can put themselves in the service of an activist.”