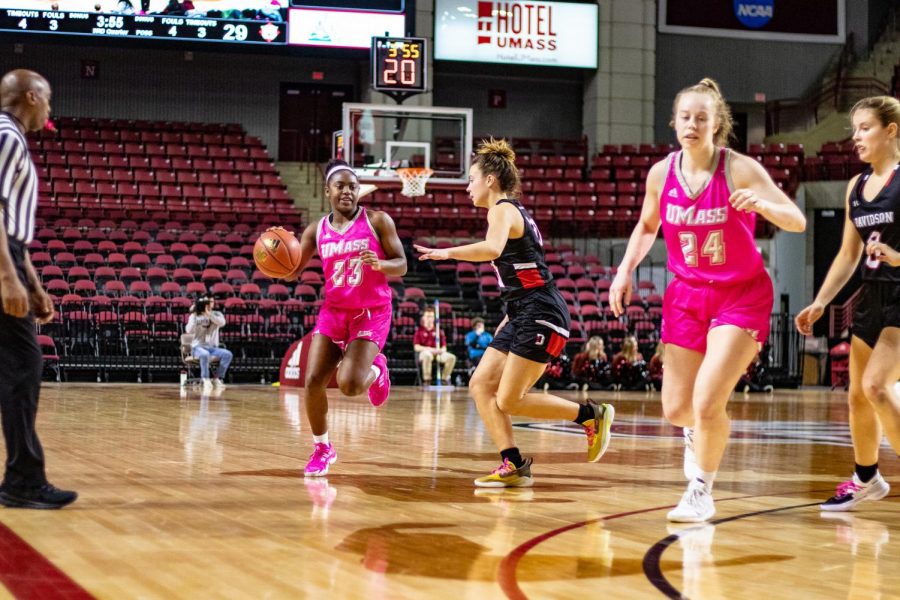 They don’t ask how; they ask how many. Despite a sloppy first half, the Massachusetts women’s basketball team earned its 18th win of the season, downing St. Joseph’s 51-47.

Senior Vashnie Perry delivered her second great game in a row, leading UMass (18-10, 8-7 Atlantic 10) in scoring with 18 points. This comes one game after a career-high 23 in Saturday’s win over Davidson. Hailey Leidel and Sam Breen also finished in double figures.

UMass coach Tori Verdi says Perry is playing like a senior who knows she only has a few games left in her college career.

“She did what seniors do at this time,” Verdi said. “She obviously wants to finish the season with a bang and she’s doing that. Her confidence was overwhelming for us tonight and she did an unbelievable job.”

After trailing the Hawks 18-16 at the half, the final two quarters were all UMass, particularly the third, when the Minutewomen outscored St. Joe’s 20-9.

After the intermission, the Minutewomen got much more aggressive driving to the hoop. Getting to the free throw line has been a staple of the Minutewomen, but in recent games they’ve struggled to make those trips. In the first half, they went 2-of-4 from the charity stripe. The second half was much better, as they made 11 trips and converted on seven.

Despite the improvements, Verdi says there was no halftime adjustment made. His team just started playing smarter basketball.

“It was playing and moving the ball from side-to-side and not being one pass, one shot,” he said. “We needed to get downhill and get to the rim, and I thought our offense allowed us to do that.”

The first 10 minutes of the game were anything but ideal for UMass. The Minutewomen struggled putting the ball in the hoop, with just four makes from the field, but what was even more concerning was the turnover numbers. They gave the ball away an uncharacteristic eight times in the opening quarter, allowing the Hawks (9-18, 3-12 A-10) to stay in it.

But as the game went on, the Minutewomen got on the same page with one another and the number of mistakes diminished.

It was one of the main reasons they controlled the second half.

“We just weren’t taking care of it,” Verdi said. “We weren’t executing, running our offense, and we just careless with it. I thought we did a much better job in the second half.”

When the shots weren’t falling throughout the contest, the team relied on offensive rebounds for second-chance opportunities. They pulled down 17 boards on the offensive end.

Late in the fourth with a seven-point lead, a UMass three went wide, but sixth man Bre Hampton-Bey snagged the errant shot, dished it out to Sam Breen, and Breen nailed the jumper outside the arc.

Their lead would stay that big until the final minute, when the game was out of reach.

“Those second chance opportunities were huge, I thought they were the difference in the game,” the fourth-year coach said. “We talked about those at length and I thought we did a great job of chasing them down after a miss to give us some more points, some more opportunities.”

One player who was busy on the offensive glass on Wednesday was Paige McCormick. The past month has been tough for the junior, who has seen her role diminish since Breen broke into the starting lineup. But Wednesday was a different story, as the junior provided 22 minutes off the bench, pulling down five rebounds and putting in two buckets.

As the season reaches its crucial final stretch, McCormick will be looked to for a spark off the bench and help on the defensive end of the floor as well as rebounding.

“It was great,” Verdi said of McCormick’s evening. “We played a little smaller without Maeve [Donnelly] and we were able to spread the floor out a bit more with Paige. She gave us great energy, a great effort, and obviously those second chance opportunities.”

McCormick and all her teammates will return to the Mullins Center on Saturday for Senior Day. Perry and her co-captain Hailey Leidel will be honored before a 12 p.m. tip against Rhode Island.