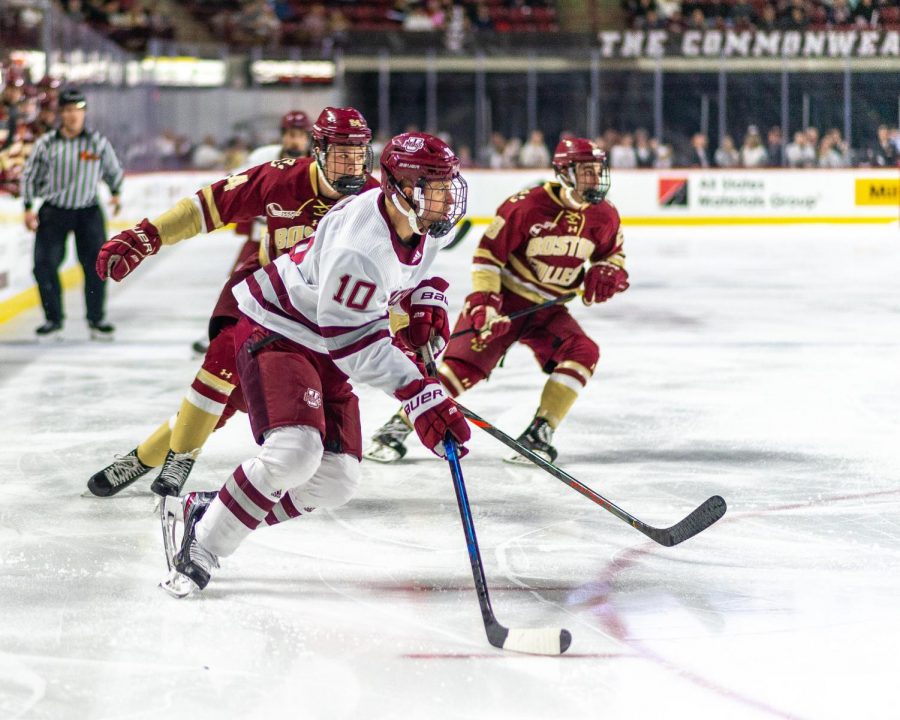 Late in the third period of what should’ve been an easy October win for UMass, American International College had them on the ropes at Mullins. After both teams scored in the first, neither squad had scored since. The Minutemen offense looked dried up.

That was until Jack Suter bothered AIC defenseman Jeff Baum’s breakout attempt, freed the puck and dished it to John Leonard, who went in and scored the tiebreaker and eventual game-winner.

It was a cool story at the time – here’s a senior getting his chance to play top-six minutes between Leonard and Bobby Trivigno. In the absence of Philip Lagunov and Jake Gaudet, Suter would get his shot, but hardly anyone expected Suter to stay in that spot for any long stretch of time.

Then the season began to unfold, and Suter became one of the only mainstays in the top-six. He sees the bulk of his minutes from the middle of Trivigno and Leonard. As people waited for Suter to fall out of the rotation, he only strengthened his case to stay.

It even came as a surprise to his coach, who had him penciled in as the fourth line center back when the season began.

“No, didn’t expect it,” Greg Carvel said of Suter’s consistency. “It’s not that he’s stayed in the top-six – he’s probably our best forward right now. Just [a] smart, skilled, speed player. His issues always been attention to detail with checking and he’s improved on it. He’s become probably our most important forward right now.”

Suter ranks fourth on the team in points with 16. His 13 assists have him tied for second.

Despite all the love for Suter now, it hasn’t always been that way for the Omaha, Nebraska native.

Suter’s path to UMass was fast-tracked. Back in 2016, he was originally committed to the Air Force Academy, but in May of that year, he decommitted.

“I didn’t know whether I was even going to go to another Division I school,” Suter said. “I just knew that wasn’t the route for me.”

Fortunately for Suter, Carvel and assistant coaches Ben Barr and Jared DeMichiel had watched him enough to want to offer him a spot on the team. He committed to UMass without a visit.

For most of his first three years in Amherst, Suter mostly ate up bottom-six minutes, alternating between the third line, the fourth line and the occasional scratch. He posted a career-worst in offensive numbers as a junior, scoring only one goal and three assists last season.

Being from Nebraska and not having a specific role on the team his first three years, no one would’ve blamed him had he decided to move on to more playing time elsewhere.

But Suter claims that never entered his mind.

“No, there was never a thought,” Suter said. “I’m not one to leave somewhere I’ve been working hard and trying to stay committed. I think those three years have helped me grow into a better player. I think I needed that. I think it’s actually helped my development heading into this fourth year.”

During this past summer, Carvel met with Suter and issued a clear message.

“I basically said if I don’t see any change this fall, we may move by you and I think he was extremely motivated this summer and give him a ton of credit,” Carvel said.

That lit a fire under Suter. This season would be his last chance at consistent minutes and to make a real mark on the UMass hockey program. A good senior year would be the only thing that could make up for his three previous underwhelming campaigns.

Maybe this would make it all worth it.

That chip on his shoulder became evident from the beginning of this current campaign. His work in between Leonard and Trivigno has been one of the highlights – and a big reason as to why he’s maintained his top-six stature.

“I think we complement each other well,” Leonard said of playing with Suter. “He’s a very underrated, fast skater. I don’t think he gets enough credit for this speed. This year I think he’s utilized it a lot more than in years past and I think that’s why he’s been a lot more special of a player this year. Big influence on the game.”

Leonard has especially felt the benefits of playing with Suter, as his 17 goals are a career-high. Suter’s been on the ice for a lot of those.

In the classroom, Suter is extremely intelligent. He was named to the 2017-18 Hockey East All-Academic team. You can count on his 4.0 GPA just as much as you can count on the sun rising in the east and setting in the west tomorrow morning.

“It’s awesome,” Leonard said of Suter finally getting his chance. “He’s a very hard-working guy who does all the right things on and off the ice, and he’s definitely getting rewarded this year and it’s great to see.”

Carvel has enjoyed seeing Suter impact the team in the ways he has this season. He just wishes it came earlier.

“[Suter] just waited a little too long to decide to get in really good shape and be a little harder,” Carvel said. “He decided to do that in the summer so he’s getting what he deserves.”

With Suter’s new No. 1 center gig, Carvel’s trust fully instilled in him and being dubbed the team’s “best” forward right now, it’s quite the swansong for No. 10.

And to think UMass almost moved on from him.