Joaquin Phoenix loves cows and more tales from the 2020 Oscars

This year’s Oscar ceremony was anything but boring 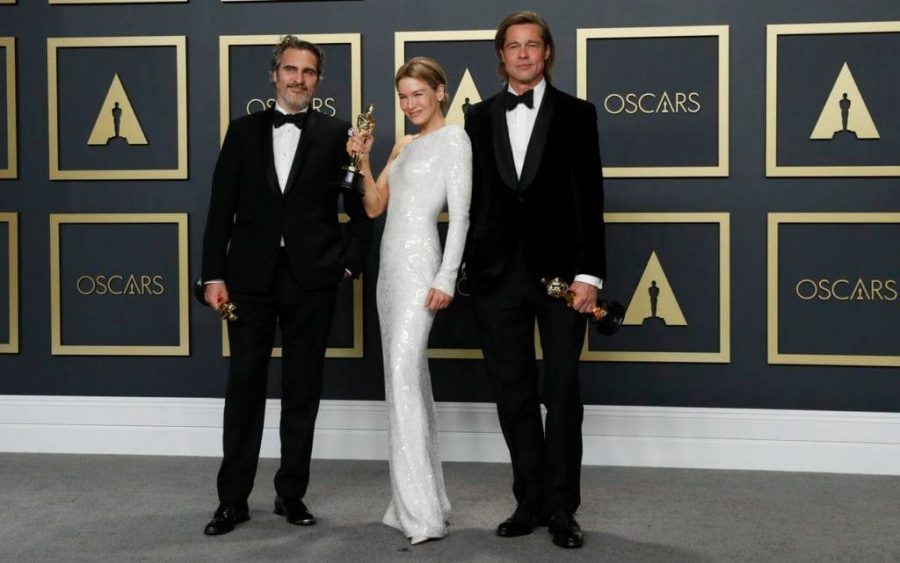 The 92nd Academy Awards started with a vibrant Janelle Monae musical number. Janelle didn’t tamper her avant garde style of performing: her expressive dance moves, dynamic vocal performance and wild stage presence will be remembered for many years to come. While maintaining her unconventional and unapologetic performance style, she also brought Broadway grandeur to the performance that could have been lost with more experimental performers. Her powerful, emotive voice fit perfectly with the mass of costumed dancers behind her, and she kicked off a ceremony about art and performance with a performance which itself was art.

The dancers wore old Western ball gowns, track suits, fancy fedoras and flower crowns – all of which referenced a film from this year. Interestingly enough, “Midsommar,” “Us” and “Dolemite is My Name,” three critically acclaimed films, were represented on stage in the opening number, but received no nominations. This theme of penance for snubbed films and artists continued throughout the ceremony with Beanie Feldstein from “Booksmart,” Shia LeBeouf from “Honey Boy” and Zack Gottsagen from “Peanut Butter Falcon” as presenters. All of these films were also critically acclaimed and not nominated at all. In contrast to last year, these presenters seemed far more specific and represented important moments in cinema from this year.

Janelle’s stunning opener wasn’t the only musical number worth noting. In a display that incorporated the impact of the whole world on the American film landscape, Idina Menzel of “Frozen 2” shared the stage with nine women who voiced Menzel’s character in non-English language dubbed versions in a dazzling performance of the nominated song “Into the Unknown.”

There were other high quality performances on Sunday night, from Cynthia Erivo singing her original song from “Harriet” with passion and raw talent, to Billie Eillish’s unexpected but poignant rendition of “Yesterday” set to the unusually short “in Memoriam” segment. Of all the performances on Sunday night though, the most unexpected had to be Eminem’s rendition of “Lose Yourself.” “Lose Yourself” released 18 years ago and was on the soundtrack for his semi-autobiographical film “8 Mile.” 17 Academy Awards ago, “Lose Yourself” won Best Original Song, adding to the surprise that it was performed at this year’s event. A variety of the celebrities’ reactions went viral, and the performance was a surprise and a hit.

“Parasite,” directed and co-written by South Korean filmmaker Bong Joon Ho, is a medley of genres mixing thriller, comedy, horror and romance into a film that explores the poor economic situation of the Kim family, along with the wealth gap that they are subject to. Despite being a foreign language film and not getting a wide release for most of its run in the U.S., “Parasite” made $35 million dollars in the U.S. and Canada. The film had a deep impact on audiences in both the U.S. and around the world with its sharp yet comedic dialogue, layered performances and universal themes of revenge, poverty, dehumanization and family.

Aided with its compelling cinematography and meticulously composed production design, “Parasite” excels in every category, according to audiences and critics alike. The Academy recognizing this diverse and thematically radical film, in contrast to the other nominations, is a far deviation from their Best Picture pick from last year, which was widely regarded as the “safe bet.” With this year’s nominations widely regarded as being far too white and male to the point of discrimination, the Academy chose to award the few diverse creators recognized.

Of course, there were still representative gaps in both the nominations and wins. Many of the year’s most critically acclaimed films were directed by women and people of color. With the exception of Bong Joon Ho, many were completely snubbed: Alma Har’el’s “Honey Boy,” Celine Sciamma’s “Portrait of a Lady on Fire,” Olivia Wilde’s “Booksmart,” Lulu Wang’s “The Farewell” and a great many more films received no nominations. With only one person of color nominated for all four acting categories (Cynthia Erivo), there were many notable performances from actors and actresses of color that were not recognized, including but not limited to Awkwafina in “The Farewell,” Lupita Nyong’o in “Us” and Eddie Murphy in “Dolemite is My Name.”

Many celebrities commented on these exclusions such as Janelle Monae, Natalie Portman and Chris Rock. The most notable celebrity comment, however, had to be attributed to Joaquin Phoenix. Phoenix, who was heavily favored to do so, won Best Actor for his role as the titular character in Todd Phillip’s “Joker.” Joaquin has won many awards this season, and has used his acceptance speeches to push for social consciousness and action. For this speech however, Joaquin used some more graphic language.

He started out with a typical all-encompassing pro-equality speech which discussed indigenous rights, queer rights and the rights of all genders and races and then moved onto discussing animal rights. In this segment of his speech, he rallied against the artificial insemination of cows and their being separated from their babies. He discussed being conscientious of the story behind the milk that we put in “our cereal and our coffee” actually being intended for calves. While this speech was unconventional in many ways, he ended with a powerful sentiment of forgiveness and compassion and quoted his late brother River: “Run to the rescue with love, and peace will follow.” This isn’t insignificant just because it’s a rich actor’s acceptance speech, it is something many filmmakers aspire to represent in their films. Through all the craziness and antics of this year’s Oscars, a vein of defiance ran throughout the show. Whether it’s the themes of mental illness and poverty in “Joker,” or Joaquin’s speech, Hollywood isn’t shutting up anytime soon and maybe they shouldn’t.