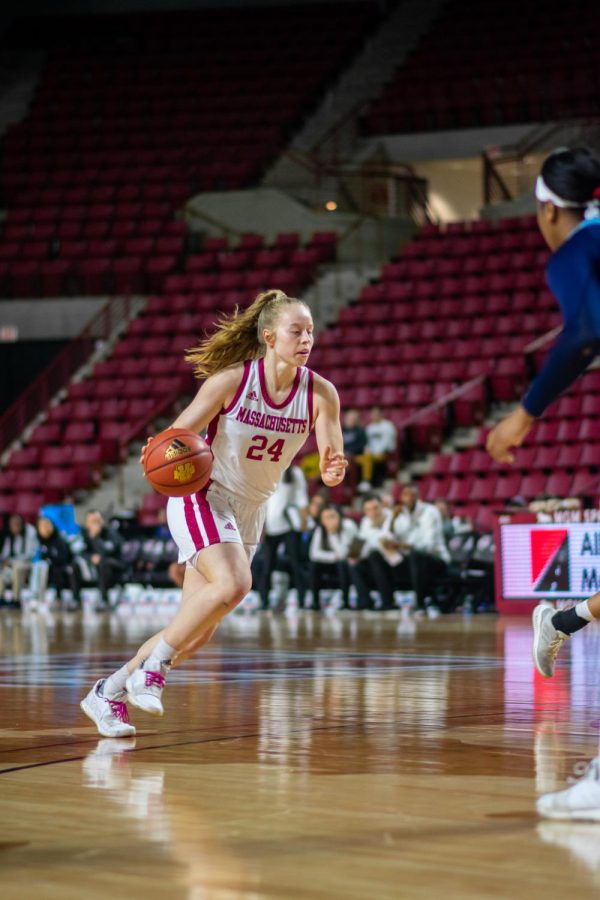 Fans of the Massachusetts women’s basketball team are unlikely to forgot Saturday’s game any time soon. In what has already been a banner year for the team, UMass (19-10, 9-7 Atlantic 10) finished its regular season with a 73-53 win over Rhode Island (13-15, 6-10).

Before the game, seniors Hailey Leidel and Vashnie Perry were honored for their time dawning the maroon and white. Leidel, who became the first player in program history to record 1,700 career points, 600 rebounds, and 200 assists back in January, had a storybook afternoon to help cap an incredible career.

The Brownstown, Michigan native, who entered the program the same year as Tory Verdi became head coach, dropped 26 points, fueling her team to a big victory. Leidel is the only member of Verdi’s initial freshman class still with UMass, making Saturday a special day for the coach as well.

“It’s unbelievable,” Verdi said. “Her story, she’ll be one of the best players to ever wear a Minutewomen jersey. What she has done for our program is truly special and I can’t thank her enough for that.”

Leidel was particularly dominant in the second half. 20 of her 26 points came in the final two quarters. She admits she was a little jumpy after the emotional ceremony taking place before the opening tip.

“After we did all that, I was shaking a little bit,” Leidel said. “I was trying not to cry and the first couple shots I was like ‘Ow, these are not good.’ I just had to let a couple out and let the flow hit me and let it all out. I got there which is good.”

After going 2-of-10 from the field in the first and second quarters, she went 7-of-11 in the final two frames, including four of her five 3-point attempts.

She also became the program’s second-leading scorer in the process, but was more excited about getting the victory.

“It’s cool,” she said of the achievement. “The thing that I think about it is really cool is that it is a documented thing. I can look back and see, ‘Oh, I’m cemented in the program’ but at the end of the day, I just want to win the A-10.”

As a team, UMass dominated the second half. After leading 27-24 heading into the dressing room, the Minutewomen caught fire, outscoring the Rams 46-29 in the last twenty.

“We showed everyone in that gym what we are capable of doing,” Verdi said. “I’ve said ‘We haven’t played our best basketball yet’ and I thought today was an example of that. We came out in that second half and we defended, and we had a want-to off the charts today. I thought we made something amazing really happen.”

Sophomore guard Destiney Philoxy was a problem for Rhode Island all game long. She did it all for the Minutewomen: taking charges on defense, shooting 50 percent from the field, and most notably, pulling down seven rebounds.

After suffering an injury back in December, Philoxy has struggled at times to play the way she was before going down. But she’s looking like the Philoxy of old in the last four games and has found herself back in the starting lineup.

Today, though, she made it a note to deliver a big game in honor of Leidel and Perry. She did just that.

“All of us were motivated a lot because Hailey and Vash are like my best friends,” she said. “I want them to know that throughout the season, from here on out, I’m going to have their back and play every game like its my last.”

Fortunately for Philoxy, Leidel, and Perry, they will get an opportunity to play together one last time on the Mullins Center court.

The opening round of the A-10 conference tournament is on Tuesday and for the first time since 1998, UMass will be hosting the game.

Hosting has been a goal for each of the four Minutewomen teams that Leidel has played on, so achieving it in her final opportunity is a great feeling.

“Gosh, I’m so excited,” she said. “It’s cool because that has been one of our goals since my freshman year. It’s so rewarding to see it and achieve one of those goals. Being able to check it off is one of those nice feelings.”

Tip off for that game is set for 7 p.m. with their opponent to be determined based on the results of later games.