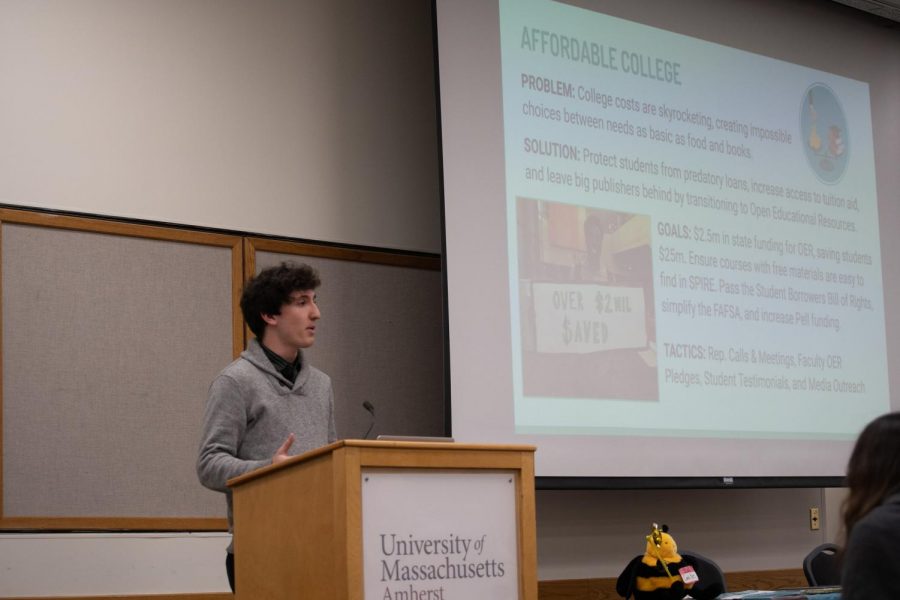 In their largest kickoff event since 2012, MASSPIRG welcomed over 100 passionate students to their Feb. 5 event where campaign coordinators and Amherst Town Clerk Shavena Martin spoke about issues important to the University of Massachusetts campus.

MASSPIRG, an abbreviation for Massachusetts Public Interest Research Group, is a statewide advocacy group with 13 chapters at colleges and universities across Massachusetts. UMass’ chapter is the largest and oldest chapter in the state and has a history of success, starting with their creation in 1972.

“Organizations like MASSPIRG just want to bring college students together and mobilize them with the proper training and skills that they need to run grassroots campaigns,” said Colmenares.

Although the 100 Percent Renewable Energy campaign is the largest in the organization,  MASSPIRG also advocates through their New Voters Project, Save the Bees and Affordable College campaigns. Members are able to be as involved as they want, whether that be volunteering once or pitching and organizing their own campaign idea.

Senior resource economics major John Coviello is the campaign coordinator for the Affordable College Campaign, whose goals are to ease the costs of textbooks and student loans by getting state funding for Open Educational Resources and pass the Student Borrowers Bill of Rights.

Coviello said that he joined MASSPIRG because he had to sacrifice five percent of his grade for a class because he couldn’t afford buying a $120 textbook and he doesn’t think anyone should have to make that kind of decision. He has stuck with the club for years because he said he is “addicted to making progress and addicted to making change.”

Amherst Town Clerk Shavena Martin was a guest speaker at the event and inspired students to register to vote and emphasized the importance of voting as a college student, which supports the New Voters Project campaign. She considered herself a “elections geek and nerd” and told the attendees “your vote is your voice.”

Junior sustainable community development major Brendan Geraghty is the coordinator for the New Voters Project. He also encouraged the audience to register to vote and noted that the organization has already registered over 100 students this semester. He said his love for advocacy began with getting students to fill out voter registration forms on campus and having the feeling of what he called “holding change in your hand.”

As a student-led organization, MASSPIRG provides opportunities for members to lobby local state representatives, spread the word about important issues to lecture halls with hundreds of kids listening and meet with congressmen in Boston.

“I’ve been in meetings with our own representative Mindy Domb here in Amherst who is very supportive of MASSPIRG,” said Colmenares. “It feels amazing to see one of our representatives knows what we’re doing get perplexed when we tell them about something they might not know.”

Leigh Appelstein can be reached at [email protected] and on Twitter @Lappelstein.