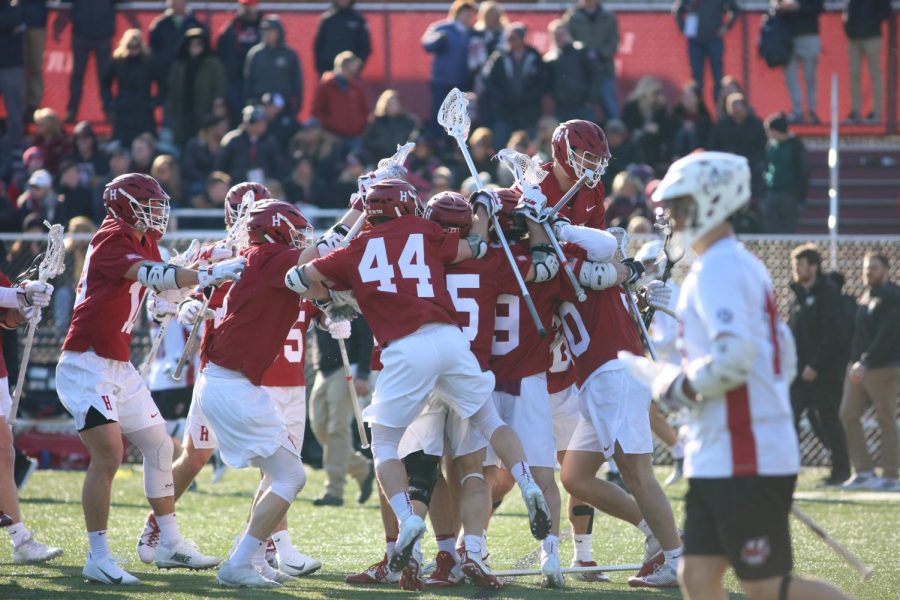 Despite a furious comeback by the Massachusetts men’s lacrosse team, Harvard was able to secure a victory on Saturday at Garber Field.

The Minutemen (1-2) were coming off a huge upset victory over Ohio State last week, but got off to a slow start and found themselves trailing 6-1 at the half. Although UMass rallied in the second half to tie the game at nine, it was Crimson midfielder Nick Loring who buried the game winning goal with 2:16 to play.

UMass coach Greg Cannella did not hold back when addressing his team’s first half struggles, saying, “We should be very disappointed in our first half effort,” adding, “I don’t know if they were ready to play or not ready to play, but it didn’t show on the field.”

The Minutemen certainly struggled to find the back of the net in the first half, taking 19 shots and only scoring once. Harvard goalie Kyle Mullin was a brick wall in net, making 11 saves in the first half alone, and finishing with 17.

“[Mullin] was outstanding in the game and probably the difference in the game,” Cannella said.

The players shared Cannella’s frustration with their slow start to the game.

“We kind of came out flat in the first half, didn’t put our best foot forward there,” Billy Philpott said. “It’s just really tough to start a game like that and win games in Division I lacrosse.”

One player who was instrumental in UMass’ late comeback was freshman face-off midfielder Zach Hochman, who won an impressive 16 faceoffs in the outing, only giving up six to the Crimson.

“[Hochman] has been really good since the get-go in the first three games,” Cannella said. “We just hope he can continue to grow and develop.”

Hochman is one of four freshman playing key roles on this Minutemen team, along with starting goalie Matt Knote, attacker Mike Tobin and defender Jake Dulac.

“We’re playing three or four freshmen who are getting significant time, and those guys aren’t the reason we lost today,” Cannella said. “Those guys are playing their butts off.”

After the first half, UMass came out firing in the second, and started to look more like the team that toppled the Buckeyes on the road seven days prior. Philpott was the first of six different Minutemen to find the back of the net en route to an inspired comeback that came up just short.

“We challenged each other to be better,” Philpott said. “We weren’t really proud of the effort we put forth in the first half, so we just wanted to get back to UMass lacrosse and play for each other. We did get back to that, but unfortunately it was a little too late.”

The Minutemen have had a rollercoaster start to the season through three games. They suffered an embarrassing 17-4 loss to Army West Point in their first game of the season, but followed that up with a key win over Ohio State, which was ranked No. 12 at the time.

Now, UMass will have little time to mull over the loss, as it prepares for a quick turnaround before its next game against UMass Lowell on Tuesday.

Speaking on the logistics involved in playing two games in short succession, Cannella said, “It’s a lot of rest for the guys and a lot of film and preparation for the coaches.”

The game between the Minutemen and the River Hawks is scheduled for 2 p.m. on Tuesday before UMass travels back home to take on Yale at 1 p.m. on Saturday, Feb. 29.

Colin McCarthy can be reached at [email protected], or on twitter @colinmccarth_DC.